I’ve recently returned to Peru after my sabbatical year, and have been able to see first-hand progress made during 2019. 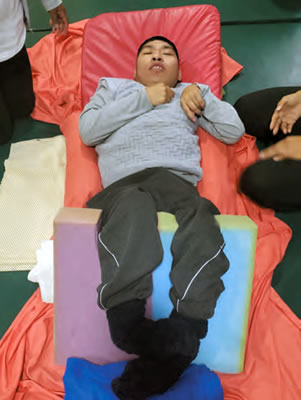 Altogether we have raised over $25,000. It is difficult to come to an exact figure, as a number of donations have been for the Ayalas combined with some other social welfare cases, and others are on-going contributions. The lion’s share of the money (just under $20,000) went to rebuilding the family home. My colleague, Columban Fr. Ed O´Connell, handed over the finished product in my absence.

I’ve been to the house a couple of times now, and can confirm that our builder, César, did a wonderful job. It had cost almost double what we had first estimated, but this was because the land (being on a steep slope) needed to have retaining walls built in front of and behind the site in order to stabilize it. Also, to get water pipes in, they had to drill through solid rock.

The second priority related to David’s condition. Early on we got him an orthopedic bed. I’ve now managed to obtain for him a made-to-measure personalized orthopedic wheelchair, plus accessories. Furthermore, two physiotherapists from our special needs school, Carlos and Marilyn, are voluntarily making periodic visits to the house to check up on him and make sure the family are positioning him correctly in the chair and bed. Also, David needs a permanent supply of adult nappies. A donor from Australia kindly funded these throughout 2019.

You’ll recall that the other main objective of the project was to cover José Ayala’s university expenses. His dream had been to study physiotherapy himself. We got him into the local Catholic University in March, but couldn’t secure him a place on the physiotherapy program. Instead he took education, a course that at least carried a half scholarship.

Thankfully, after the first semester, he WAS allowed to cross over to physiotherapy – although at the cost of losing his half-scholarship! Still, we should have enough to pay his way. He has four more years to go, at an estimated overall cost of $5,600. We have $4,000 in the kitty. Donations continue to trickle in to help the family. Also, in the final two years, students can start working as part-time assistant physiotherapists, and this way José could help finance his own education.

Thank you all once again for your marvelous support.