Sport is always a great way to bring people together. This is especially important when you live in a barrio, an area with a high poverty rate, where there are migrants from different countries. With that in mind the young and not-so-young from the various Catholic churches in Alto Hospicio, Chile, gathered for a soccer tournament on Saturday, May 24, 2018. Teams from the Columban Parish of Sagrada Corazón and Doce Apostoles both participated. Alto Hospicio is a mining town in the Atacama desert in the north of Chile. 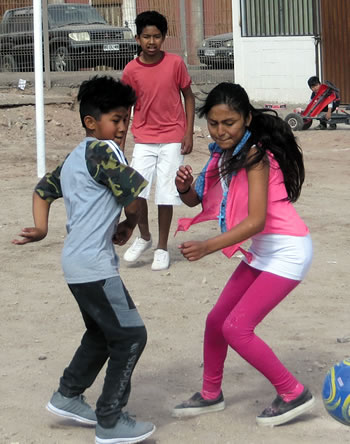 I work in the comedor, a soup kitchen in the shantytown near the main parish church of Sagrado Corazón. Recently, a soccer field was created behind the church. Given that we can have up to 60 kids in attendance for meals at the comedor we were confident that we could form teams from different age groups of boys and girls. And what better way to run off the day's lunch cooked in the comedor by the local mothers!

Cars packed with enthusiastic children, we set off to the school designated for the day's activities. We were a multinational force with not only Chileans but also Bolivians, Colombians, Peruvians and an Irish trainer who was nearly getting as excited as the kids. We arrived on time and seemed to be the only ones to actually turn up. Was it cancelled without notice? Stranger things have happened here. However, in typical Chilean style, participants began to arrive in dribs and drabs until eventually a good-sized crowd had assembled. The kids persisted with impatient questions while I tried to find out what was going on. A couple of hours after the start time we at last started. Teams were registered and three small soccer fields eventually sprung into life. The only synthetic one was reserved for the "ninos" and "ninas," the smaller boys and girls which signified anyone up to 12 years old within grabbing distance. The older age groups took their skills to the concrete fields.

Our first game was with the young girls, and despite a valiant display the greater size of the opposition combined with our lack of training resulted in a loss. No matter. A Bolivian mother vowed to take them in hand in the future for further development. Next up was our teenage boys. Somehow we were paired against a team of grown men who looked like they had just arrived from the mines after a hard day's work. Upon reasoned protestations from myself about this "David and Goliath" contest, it was decided to rearrange things slightly, and we were matched with more suitable opponents.

Our team was made up mostly of Colombians and a couple of Bolivians had skills that Pele himself would have been proud. Unfortunately, the beautiful game wasn't rewarded against a more direct Chilean side, and we suffered a narrow defeat.

The day took a turn for the better when the young boys took to the field and combined both skill and discipline to produce a well-deserved win and a place in the final. However, before the final, our team of women had to compete. Our opponents were the main parish church from the other parish so there was a keen sense of competition. It was a bruising affair with injuries, yellow cards and a besieged referee. Games don't come much tighter than this as players clashed and fought for every ball. Unfortunately, our opponents took the spoils in a testy affair.

Then we had to focus on the final for the boys. Given that it was the last game of the day, a crowd circled the field, and the kids of the shantytown of Sagrado Corazón were ready for action. Once again they produced a magnificent display as our supporters urged them on, the excitement building. Our opponents were no match for our multinational force, and they succeeded in bringing home the win. Hands were shaken and the celebrations began. We were the final team to receive the cup at the presentations, and the kids enthusiastically embraced their trophy and raised it in the air to shouts of joy. With heads held high we packed everyone into the cars again bound for home. Due to the late start we didn't get to enjoy the planned "completes" which are the Chilean version of hot dogs and a favorite snack of the kids. Not to worry. That would be left for another day, and nothing was going to dampen their spirits for that night at least. Now with our new soccer field behind the church hopefully we have a good platform to progress!