We entered the so-called Bahay Pagasa, “House of Hope.” It turned out to be a children’s jail. We brought snacks and drinks to share with the young people in the cells. About twenty-five girls were crowded into one room. No air conditioning here, no fans either, so we brought some, but the rancid body smells pervaded the cells in the hot tropical heat.

There is a water shortage. One of the children Preda Foundation rescued from the cells told us later that they were only allowed washing or showering twice a week. This is a very big hardship for Filipinos living in overcrowded cells who are normally fastidious about washing and showering and maintaining good personal hygiene. The steel bars of the gate and on the windows told us it was a jail cell. There was no escape. They were looked upon as youth offenders, seen and treated as criminals by the authorities. 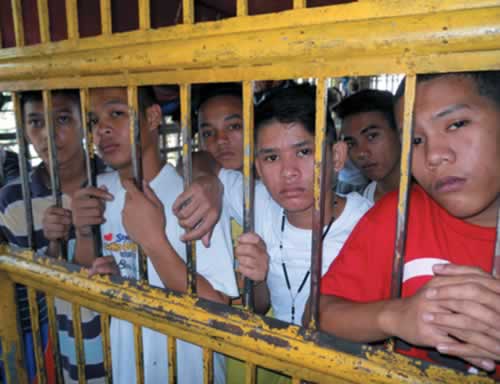 The staff were ashamed that we would see the overcrowding of children behind bars, without beds, without furniture in cramped cells. There is not much hope for the youth detained here. They are like animals in cages. The levels of aggression, frustration, anger and violence is high among the boys and girls in the confined space. There is no outlet. No basketball or exercise, little entertainment.

It is the direct result of corrupt government officials that rule for themselves and not for the welfare of the people. Super rich dynastic families and clans rule the nation. The laws they make favor their interests and businesses and those of their children. Besides their own, children for them are of little importance.

We rescued John-Jo, 14 years old from the youth detention center. He told us he was arrested for curfew violation. There are no government homes for the small street children who have no homes where they can go. They sleep in doorways, under trees or in the back of parked jeepneys or buses.

They are the throwaway children, the unwanted and abused and rejected human flotsam of society. They run to the streets when they are beaten at home, rejected and scolded by their parents. There is little food, comfort, or love for them in their families.  They seek a better life with the other street children in similar circumstances.

Before taking John-Jo to the Preda Foundation Home for Boys for a new happier life, we sought out his parents. We drove to a remote part of the city, walked along narrow alleys and found his father and elder brother living in a small box-sized shack with space for only two people to stand in. They were watching a small television.

John-Jo’s father asked why his boy had been arrested and then after the Preda social worker explained we were taking him out of the jail to a better life where he could go to school, he understood and embraced his son.