From Korea to Chile

The work of the Columbans over the last 65 years has been blessed by the presence of diocesan priests (associates) who contract with the Missionary Society of St. Columban for a period of six or more years. During my first years in Chile, they came from Ireland, England, Australia, New Zealand, and Scotland. My first parish priest was Fr. Sean Conaty, an Irish priest who belonged to the diocese of Hexham and Newcastle in England. After he left Chile in 1973, we remained in contact over the years. Fr. Sean always maintained that his experience in Chile was formative for his priesthood. Today, the majority of Columban associate priests are coming from other countries, principally from countries where the Columbans have missioned for many years: South Korea, Philippines, Fiji, and others. Recently, I traveled to the Columban parish of Sagrado Corazón (Sacred Heart) in the desert city of Iquique. Iquique is a city which has grown immensely since the Columbans went there in 1979. The parish of Sagrado Corazón is situated on the pampa – the desert plain which towers over the city of Iquique. Years ago, it was populated by a few campamentos (shantytowns) and a munitions factory. Today, it is the sprawling municipality of Alto Hospicio with more than 150,000 inhabitants. The parish of Sagrado Corazón is the largest of the three parishes of the municipality with more than 60,000 inhabitants. Many of the inhabitants are people from the mountain villages or mining camps as well as many immigrants from Peru, Bolivia and Colombia. 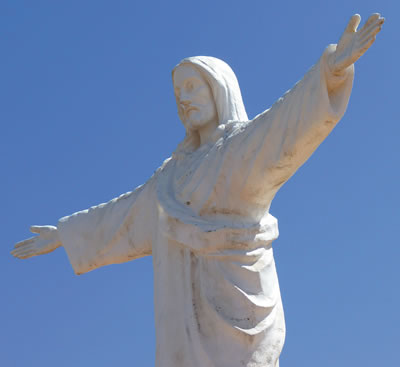 On the morning after my arrival I walked over to the parish center where there was a colonia urbana (an urban summer camp). It was packed with children, most of whom were the sons and daughters of immigrants from Colombia, Bolivia and Peru. In the middle of them participating in all the activies was a young Korean Columban associate priest, Fr. Andrés. He seemed to be having as much fun as the children. I decided that I would interview him to find out what made him decide to be a Columban associate priest.

Fr. Michael: Fr. Andrés, what made you decide to come to Chile as an associate priest?

Fr. Andrés: I first came to Chile in September 2008 as a seminarian. I had been in the seminary for two years, and our Archbishop wanted his seminarians to have an experience of the Church in another country, especially among the poor. It was an excellent experience. I didn’t know anything about the missionary life of the Columbans. I saw the Columbans in their work with the people, and it was for me a different way to be a priest. The Columbans and their associates helped me to discover another way of being a priest.

Fr. Michael: When were you ordained a priest?

Fr. Andrés: I was ordained in February 2014. I worked in a parish in Seoul for two and a half years. But the experience in Chile had marked me. I was dreaming of returning to Chile. It is the norm in that a priest must work for the first three years of his priesthood in the Archdiocese of Seoul. I asked to return to Chile.

Fr. Michael: When did you return to Chile?

Fr. Andrés: I returned on March 1, 2017. I went to Cochabamba, Bolivia, to study at the Maryknoll Language Institute. After six months, I came back to Santiago on the first of October 2017. I was assigned to the parish of Sagrado Corazón in Iquique with another young Korean associate priest, Fr. Francisco. I had visited the city in 2004, and now I discovered how it had grown. The people of northern Chile are different from the people of the south!

Fr. Michael: Fr. Andrés, why do you say that the people of Northern Chile are different from the people in southern Chile?

Fr. Andrés: Many of our parishoners come from the small pueblos (villages) of the cordillera (Andes mountains). They speak Aymara! The Mass was not celebrated every Sunday in their pueblos, only a couple of times in the year when they celebrated the fiesta of their patron saint. When they came to live in Iquique, they did not go to Mass. Instead they travel a couple of times during the year to their pueblos and there they go to Mass! In the pueblos, their faith was that of campesinos. Now they have to learn to live their faith in the city.

I have traveled to nine of their villages to celebrate Mass during the fiestas. The only people who live there all year long are elderly, but their families travel from Iquique for the fiesta. A lot of people are from Alto Hospicio. I take advantage of the opportunity to talk with them. I enjoy listening to them because they open their hearts. I invite them to contact me in Alto Hospicio when they need anything.

Fr. Michael: A lot of your parishoners are the sons and daughters of men and women who worked in the nitrate mines of northern Chile and when the mines closed they emigrated to the city of Iquique. For them, the bailes religiosos (religious dances) are important. Are you working with the bailes?

Fr. Andrés: There are three bailes religiosos participating in our parish. Deacon Carlos Luna is the Coordinator of the bailes religiosos, and he invited me to accompany him and the dancers. Deacon Carlos helped me in the beginning with my homilies. I find it hard to preach in Spanish but he tells me that I speak well! We are inviting the dancers to receive the Sacraments and have prepared a number of them for Baptism and Confirmation. I think that we can do more to help them in their faith.

Fr. Michael: What else are you involved in?

Fr. Andrés: With Fr. Tomas Hanley, the pastor, we rotate to celebrate Mass and the Sacraments in our four chapels. I also participate in the Mes de María (Month of Mary) in the chapels and the public plazas. The parish has a comedor (soup kitchen) in one of the poorest areas, and I visit it frequently. Seventy children live in the area, normally each day about 40 children come to the comedor. Many of them are Colombians who have immigrated to Chile. Lots of them have no papers, and they cannot go to school without an identity card. They can’t read or write. I visit their homes and talk with the parents. I encourage them to come to the chapel and to receive formation in their faith. If the parents do not get involved, the children will have no faith. With Fr. Tomas we want to offer training for the parents, things like hair dressing, baking and pastry making and other courses. This way they will find it easier to get work and get their documents to stay in the country.

Fr. Michael: What do you like and what do you find difficult about your work as a missionary priest?

Fr. Andrés: I like the people, and I feel welcome and accepted by them. There is an incredible lack of priests here. We could do more if we had more priests. I feel needed, and I am grateful for this opportunity. What pains me most is the fact that so many of our parishoners do not come to Mass. They are good people, and the challenge for me is to help them to discover the presence of Christ in the Mass.

Fr. Michael: Thank you, Fr. Andrés, for this interview. I think that you have made an excellent beginning to your missionary experience here in Chile with the Columbans. Please let know if there is anything else which we can do to help.

Home » From Korea to Chile