My Morning Dose of Happiness

Every morning on my way to the office I often see a woman with a dog in a small playground outside the Columban office gate in Hong Kong. I often see both of them sitting on a bench while she would be talking on her phone. Every time I see her dog I am reminded of one of my own dogs in Taiwan, Mli. Both of them are yellow Labradors. For days, I had been trying to find the opportunity to say hello to her and ask her if I could pet her dog. However, she was always on her phone. It had been over two months since I saw her, and I was still waiting for that opportunity. Until, one morning I saw here without her phone so I took the chance to say hi and introduce myself to her. I found out that she is a Filipina migrant worker, and her name is Nanette. One of her responsibilities is to take the dog named Songsong for a walk every morning. At first, the dog was nervous around me. Every morning for the next few days, I spent time with Nanette chatting and getting to know more about her before I started my work in the office. Songsong also started to feel at ease being with me, and eventually we became good friends. I would pet her while chatting with Nanette. 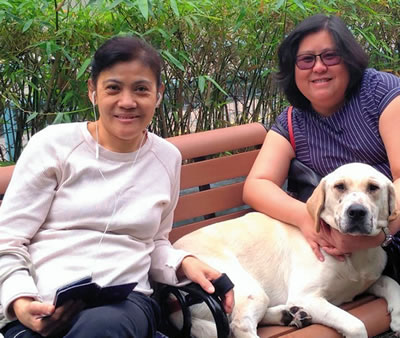 Through our morning encounters, I learned that Nanette has been working as a domestic helper in Hong Kong for fourteen years. She has four children and has been separated from her husband for ten years now. She is the sole provider for her children. Even though she is separated from her husband, the husband still lives with her children in their house in the Philippines. She sends most of her salary to the Philippines for the education and day-to-day needs of her children. Nanette is grateful that three of her children have finished college and are now working. Two of them also have families on their own. She now only supports her youngest daughter who finished studies in high school in March. Nanette proudly shared with me that she went home to witness her daughter receive her high school diploma.

Nanette also shared with me that she is delighted that the two of her employers’ children, whom she has been looking after for many years, have grown up to be good people and treat her with love and respect. However, she said that her first two years in Hong Kong were rough and challenging. The boy who at that time was in 5th grade was often angry and used to hit and kick her. She told her employers about their son’s behavior, but they did not do anything about it. One day the boy kicked Nanette so hard that she was in great pain, so she kicked him back. The boy squirmed with pain and cried. Nanette then told him that she made him feel the pain he inflicted on her. She also added, whatever you do to others will come back to you. Nanette explained to him that if he needed her attention, all he needed was to ask her nicely. There was no need to hurt her, because she cared for him and made sure that he had the things he needed. After that incident, the boy stopped hitting or kicking Nanette. He also started to learn to say please and thank you.

Nanette shared with me that she was there when her employers had difficulty keeping their marriage together. In one of their fights, Nanette could not take the screaming anymore, so she went out and told her employers that the children were in their rooms and could hear them screaming at each other. She asked them to settle their problems by talking about it in a civilized manner, and to consider the feelings of their children. The couple divorced eventually, and Nanette was there for the wife and her children for comfort and support which she continues to do to this day. The son promised Nanette that he will hire her once he gets married and starts a family. He wants her to also look after his children.

Nanette’s story is one among the many stories of the 390,000 foreign domestic helpers in Hong Kong. They are here to help provide for their families in the Philippines. These women amaze me with their capacity to sacrifice for their loved ones. I am also captivated by their big hearts to love and care for other people’s children, those they look after here in Hong Kong. They deserve to be respected and recognized for the great sacrifice they make for their own families.

Home » My Morning Dose of Happiness