“We need to be on our way now” were the words of Columban Fr. Pat Colgan even though the rain continued to heavily pour in Korovou village, Fiji.

The Prophet Mohammed’s birth (Peace Upon Him) is publicly celebrated throughout the country of Fiji, where the government has made it a public holiday, November 11. 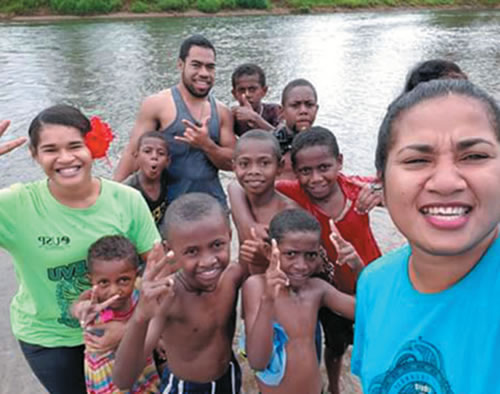 We had planned to go on a picnic on this particular day, to the village where my sister, Paulini Maria, lives with her husband. She was informed of our coming, and her response was that we would need to expect the tough reality of village life, especially what the people of Korovou have to go through during wet weather. We would share a meal with them before returning to the “comfort” of Suva. She had invited the clan of her husband to formally welcome us when we arrive. This was a surprise for us as our expectation was that the gathering would only consist of ourselves and my sister’s family.

We knew that we would be crossing a river so we brought our swimming suits along planning to enjoy a swim first before heading to the village. However, we could not have imagined what awaited us at the river bank, mud reaching up to our calves before we could actually get to the water. Nevertheless, we got into our bathing suits and joined others who were swimming when we arrived. So far, the rain was gentle, but that would change later in the day.

When we had frolicked enough, boats appeared to take us to the village which was about a quarter of a mile on the other side of the river bank. The only means of transport for the people of Korovou are small boats (when the water is high) and on foot when the water is any lower than the thigh. We reached the other bank and walked through the village as the house we were going to was at the end of the upper part of the village. As we got closer to the house, again we had to walk through the mud since there was no other way to get to the house. 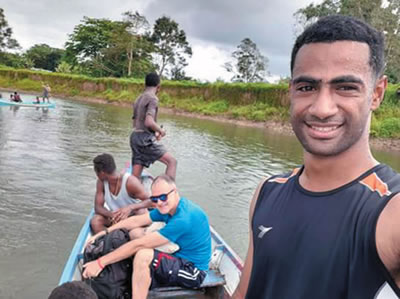 We arrived soaking wet and were greeted by my sister. It was raining very heavily at this point. We got into dry clothes and were served tea and bread. We then presented our sevusevu (Fijian kava offering) and then the social began, the house rapidly filling up with village people. What a surprise, Fr. Pat was served with a “tsunami bilo” ( Fijian expression for a HUGE bowl) of grog which is that village’s way of welcoming people. He downed it in one gulp! (We also had one each, perhaps more!!). The social continued with stories of the Columban priests, in particular Fr. John Mahoney, RIP, who had had worked in Vanuakula parish and also Fr .Pat’s own story of when he was put on a horse during the Palm Sunday liturgy there in 2011, which took him not to the church in an enactment of Jesus, but galloped off in a totally different direction!

There was time to answer questions by the villagers about the church and our faith which, for me, was the highlight of our visit to the village. We were then served with rourou (Fijian vegetable) cooked in different ways after which we had to excuse ourselves as the rain continued to pour heavily, and we were concerned about our trip back. The river was rising fast and when we got to the water bank, it was already up to our chests. Not seeing any sign of the boats that had been promised, we said fast prayers and swam across the strongly gushing river to where we had parked our van. Thanks be to God we all got safely back to the other side of the river. We trudged through more mud to our van, and, after rinsing ourselves down with a bucket, got home safely.

This picnic turned out to be an experience of a struggle that many village people have to go through for survival. It was an eye-opening experience for me in the sense that there are many in my own country who have to live this way, including members of my own family, and I never fully realized it until today.

Navitalai Paulo is a Columban seminarian.