Scavengers in Our Own Land

The Kachin State is located in the northernmost region of Myanmar and is covered with natural resources and thousands of mountains. Every morning begins with waking up to the chirping of birds and to sounds of a variety of creatures. To me, Kachin land is the most beautiful place in the world. 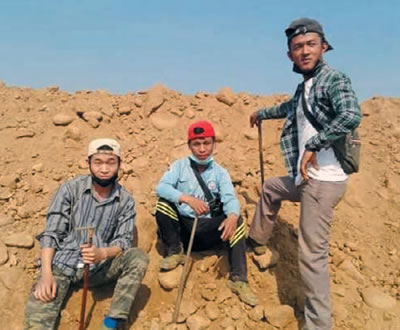 The land is not only known for its natural beauty and diversity of plants and animals, but it is also known for minerals and precious stones or gems like jade, amber, copper, platinum and gold. But among them, jade is the most popular.

This story begins in Hpakant. Jade has been Myanmar’s key export for many years. The jade which is extracted from the area has the best quality in the world. But with its popularity comes its notoriety of tragedies like deaths from landslides, drug addiction, and unfair labor.

Living and working in the mining camps is a lot of struggle and back- breaking work. Many of us freelance miners (small-scale independent) locally are called yemase, which means scavengers who search for possible jade fragments left-over by large mining companies in the open mines. Most of these yemases live a hand-to-mouth existence.

People discriminate and despise the yemases, because they are considered to be all drug-users, thieves and bad elements. It has now been a month since I arrived with my friends to do freelance jade mining. We look for precious stones coming out of the steep slopes of the open pits created and dumped by the mining company trucks. Each one of us armed with a small hammer mounted on a stick taps the rocks listening for a certain sound that indicates precious jade is inside the stone.

We cannot go into the pits or the piles of stones any time of the day because most of the company areas are guarded and restricted. The sound of a whistle signals that the gates are open and everyone rushes to the area where left-over or scrap stones are dumped by the mining companies.

The yemases work hard hoping to find the stone that will make him rich, but constantly face danger and have to do back-breaking work.

As I tap on each rock, trying to listen to the sound of a jade inside a stone, I also have to look out for falling stones and even for fellow miners. We work in areas prone to landslides, and deadly accidents are regular occurrences. These mining areas are high-risk for injuries and fatalities, especially at night–although some miners (including me) prefer working at night to avoid crowds and quarreling among the yemases once jade is found.

There is no real agreement between the yemases and the companies. If a yemase finds a valuable jade, the company would buy it out for less the amount if one sells it outside of the companies. If we only get small stones, we can carry them in our bags without being discovered. However, bigger stones catch the eyes of companies and force us to sell at lower prices even if the value of stone is very high. If we don’t give in, they would take away our stone, and we get nothing.

There is no legal protection for yemases. If we have problems with the mining companies, we can be sued. If we get injured as a result of failure by the companies, we do not get compensation. Yemases have no life insurance. Many miners have died in a number of landslides, and the death toll is uncounted. Yet even with all these risks people continue to come and try their luck of finding jade. Why do people keep coming to HpaKant, especially young people?

Many workers from different parts of Myanmar arrive in Hpakant to find employment and income. Many of them are drifters. The longest running internal armed conflict in the world (between the Kachin Independent Army and the Burmese Army) is also causing many young people to be unemployed. And for those who could not continue studying, the easiest place to find employment or income is Hpakant. Prohibited drugs are also sold and bought easily. Drugs are cheap, and many young people are addicted. It is easy to lose one’s dignity and self-respect in Hpakant.

Many young people believe that Hpakant can change their lives. Just finding one high-quality jade stone can lift them out of their poverty and struggles. But being a yemase is not easy. And yet, the number of yemases among young people is increasing.

Jade mining has many negative impacts to the environment. The land around Hpakant has been altered in the many years it has been mined. Mountains become deep pools and pits. Flat lands have become mountains of scrapped rubbles and stones.

The flow of water has already been altered. Water tables also are drying up. Forest lands were converted into mining areas pushing out and killing the local population of a variety of animals and plants. The arrival of miners from every part of the country has also led to increased pollution and waste generation year after year. Yet the rich get richer, and the poor increase in number.

I believe it is time to look after and care for our environment and for every creature. Existing environmental laws should be enforced to protect our ecosystems. And laws should also be crafted to protect the yemases. To recover the land and forest lost to mining, companies should be required to plant trees. Should jade mining be stopped? That is the biggest question. If jade mining is stopped, where will the yemases go?

Peter Sut Ring is a local Kachin youth and a fourth year university student taking up Mechanical Engineering. He is also an active member of the Catholic Student Action Myitkyina (CSAM), a university student movement. Like many of the young people in the diocese, Peter went to Hpakant with some friends to spend his summer break to be a “yemase” and earn some income while on school holidays. He wrote this piece while mining jade in Hpakant and shared it with Columban missionaries living and working in Myanmar.

Home » Scavengers in Our Own Land