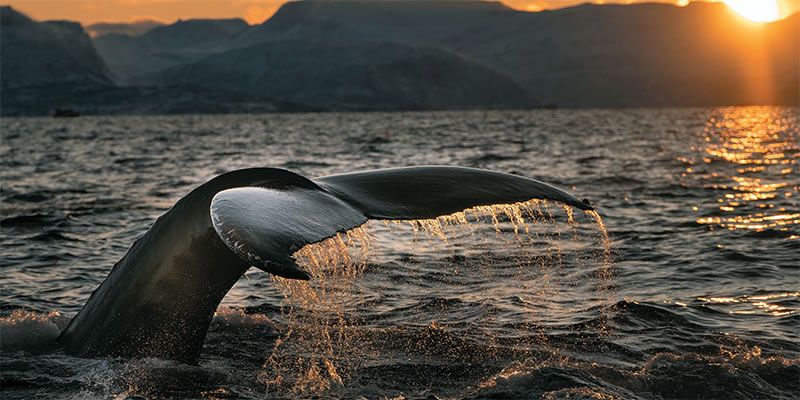 It was just before midday on Holy Thursday when the Archbishop called to say he would be around shortly to say farewell to Fr. J.J. Some time later, he arrived. The Archbishop of Suva is Dr. Peter Loy Chong, and he was accompanied by his Vicar General, Fr. Sulio Turagakadivi and some others. They proceeded to honor Fr. J.J. with a traditional Fijian farewell, offering him a tabua, a whale’s tooth, the most precious Fijian cultural symbol of respect, and kava to drink. Fr. Sulio acted as the Archbishop’s Herald and spoke for him. Those in higher positions do not speak in the Fijian – and Pacifican– culture but have a herald to represent them. In presenting the tabua, Fr. Sulio mentioned the thirty years’ service Fr. J.J. had given to Fiji, both at the seminary and as parish priest of Labasa and thanked him for his tireless service to the people of Fiji and the Pacific. It was a very moving moment for us all and particularly for Fr. J.J.

Born in Limerick, Fr. John Joseph Ryan was ordained in Dalgan, Ireland, in 1961. He was immediately dispatched to Spain to study Canon Law. He was then moved to Rome to complete his doctorate in this subject. The next few years were teaching in Dalgan, the Columban seminary in Ireland. There we older Columbans had him as lecturer. Fr. J.J. then went to Tubingen in Germany and did another doctorate, this time in systematic theology under the wellknown theologian Fr. Walter Kasper, now a Curial Cardinal in Rome. On completion of his doctorate, he was offered the possibility of teaching in Tubingen, it seems, and on writing to the Columban central administration for instructions was told rather to go to Suva and teach there.

The Pacific Regional Seminary in Suva had been set up in 1972. Fr. J.J. arrived in 1973 to teach and be the first Dean of the Seminary. He taught there for ten years. Fr. Fred Kado SM, one of the first group of seminarians and now a Parish Priest in Suva says of Fr. J.J., “He brought an academic rigor to our lives that woke us all up.” During these years he also set up the Marriage Tribunal for CEPAC, the bishop’s conference of the South Pacific based in Suva.

His next stop was Sydney, Australia. He was asked to move there to teach at both the Columban seminary in Turramurra and the Marist Seminary at Hunter’s Hill. He also taught at the Pacific Mission Institute or PMI. This offered renewal courses for returning missionaries from Australia and all over the Pacific. He eventually became the Director of PMI. These Institutes all closed just before the millennium, and Fr. J.J. opted to return to Fiji but this time to Labasa. He left behind him a lot of contented students as indicated by the numbers who still keep in contact with him.

Labasa is the second city on the second largest of Fiji’s 330 islands, Vanua Levu. There he joined, Fr. Martin Dobey. Fr. Dobey was one of the pioneers, those who had started the Fiji mission in 1952 and was a Director of the Region several times. Eventually he took over as parish priest of Labasa and labored tirelessly there for 20 years. He most faithful helper in these years was Mr. Joseva Vasakula who stood valiantly at his side in good times and in bad. Eventually he moved on to Emeritus status when Fr. Paul Tierney took over as parish priest.

Early in 2021, he moved to Suva for a short break but became locked down here due to Covid. Inter-island travel was forbidden. We celebrated his Diamond Jubilee on Dec 20, 2021. His health had become precarious with a touch of pneumonia, and we were extremely worried for him. With the help of a dedicated full-time caregiver, Maria Turagaulu, he regained his health and is now able to travel to Ireland.

The Archbishop shared lunch with Fr. J.J. after the kava ceremony. Years ago, they were neighboring parish priests in Vanua Levu and had much in common to discuss. The Archdiocesan media crew interviewed Fr. J.J. “What abiding memory have you of Fiji,” They asked. His answer came quickly, “The amazing resilience of the Fijian people.”

On Easter Monday, the eve of his departure, the chairman of the Labasa parish, Fr. Iosafu Raonu, arrived with a delegation From Labasa to farewell Fr. J.J. A happy time followed.

As we farewell Fr. J.J. From the South Pacific, we are reminded of Mk 10:45: “For the Son of Man also came not to be served but to serve and give his life as a ramson for many.” 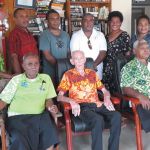 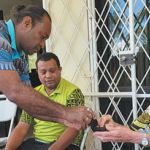 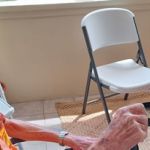 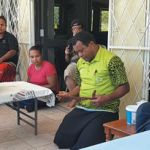 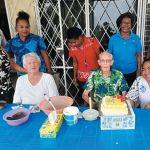