Finding God Away from Home 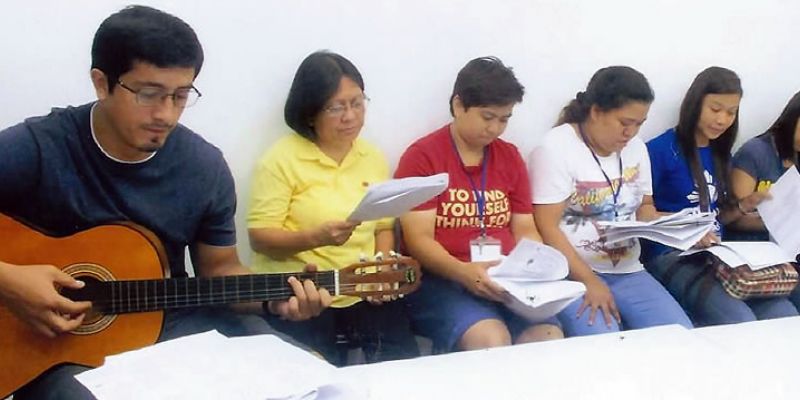 Changed by the Pastoral Experience

As part of my process of priestly formation, in 2015 I was assigned to Taiwan to perform my First Missionary Assignment (FMA). In Taiwan, after ten months of studying Chinese Mandarin (Taiwan's official language), I was assigned to the Holy Martyrs Sanctuary parish in Banqiao, near Taipei, the capital of Taiwan. The priest in charge of the parish was Fr. Willy Ollevier, a Belgian priest of the Congregation of the Immaculate Heart of Mary (CICM).

In the parish, Fr. Willy, speaking of the economic reality of the country, told me that although Taiwan is not considered an independent country, thanks to its large revenues generated by its high-tech companies such as computers, cameras, cameras, tablets, electrical artifacts, television sets, assemblies, etc., it was recognized worldwide as a world power. In our parish there were six of those types of companies. Therefore, it was one of the countries that received the most foreign workers from Vietnam, Indonesia, and the Philippines. Together with Sister Nelly, a Filipino CICM Sister, he wanted to begin a pastoral care of the faith and, if possible, to celebrate the Eucharist with the workers from the Philippines as he had previously done when in charge of another parish. In principle, the idea seemed more unattractive because it meant speaking English (the official language of the Philippines), while my great desire was to put into practice everything I learned in my ten months of Chinese Mandarin study. Even though I began with little spirit, this pastoral ministry gradually became a wonderful experience of being God's presence to those in need.

As we began our pastoral care of Filipino workers, we found two news items, one good and one bad. The good news was that at the six companies within the parish territory, there were many Filipino Catholics (mostly women). The bad news was that of the six companies, only the company head belonged to a Catholic family, and he stated that there would be no diffi culty in carrying out this pastoral care with the workers at his company. In relation to the Filipino Catholics working at the other fi ve companies, we would have to see how to accompany them without depriving them of their labor obligations, otherwise they would have serious problems.

Thus, knowing that the companies started the work day between 8:00 and 8:30 a.m., we decided that we would do our visits on the weekend. Our weekly pastoral ministry involved getting up at 5:00 a.m., preparing Sambuhais (Sunday readings), and sometimes preparing sandwiches. We would then go and wait outside the dormitories where the workers stayed. Once the workers were outside, we tried to intersect them to share the Word of God, to make personal intentions, to pray for each one of them and their relatives in the Philippines, to sprinkle them with holy water. We insisted on attending Sunday Mass, receiving the confession and communing the body of Christ. In this way, without an established place, our pastoral accompaniment was carried out in the public way, before the curious eyes of the passersby. We learned to ignore the traffi c noise.

Little by little, the small pastoral ministry we were doing deeply touched my heart for many reasons. The Filippino workers were, like me, also strangers, from different circumstances, away from their loved ones. In spite of the distance, the only force that moved us was the faith in a Father God who never forsakes those who welcome Him. See, every weekend, the sparkling faces of all those who were opening the doors, the fi rst people they saw were three missionaries with smiles on their faces, sabuhais and sandwiches in their hands, waiting for them. There was a lot to learn from the great example and commitment of faith they had. It was so emotional to see that they were hastening to form circles in order to listen to the Sunday readings, to listen to the refl ection and, above all, to receive the blessing of the Father. How anyone not feel challenged to see them running to raise our hands and bring them to their heads in a sign of blessing? And above all, it was very comforting to see some tears emerge from their eyes in gratitude, for, as we were told, despite the infi nite adversities of living, far from the people they love, in a country of different culture, despite the fatigue and the routine of work, in every moment they felt the accompaniment of God, the one who accompanies with His love, a God who not only listens to them, but also gives them strength to continue.

Finally, all these Filipino workers have taught me that there can be sadness, nostalgia, fatigue, anguish, pain, rage, etc., but God is always in our lives. It is up to us to believe and put our trust in Him. That they saw in us a God who came to meet them also represented, for me, the image of a working God, a God who gives His life for all those He loves. These workers, with their charisma and their great strength of faith, they are that close face of the God that I have been looking for so much. Thank you, Lord, for this wonderful pastoral experience.