Ever since the Columban Fathers began their mission in China, they have had to deal with and work with members of non-Christian faiths.

As they expanded into other mission countries, some of which were majority non-Christian, the Columbans encountered Buddhists, Hindus, Muslims, Sikhs and many other religious groups.

The November 2007 issue of Columban Mission magazine described the history of Columban interaction with other faiths in countries such as Fiji, the Philippines, Burma and elsewhere. Articles by Columban Fathers Thomas Murphy, the Superior General, and T.P. Reynolds discussed the necessity of positively engaging non-Christians. In the next few years, other issues of Columban Mission, (including February 2011) focused on the same ecumenical theme.

The Columban interaction with non-Christian faiths has not always been positive. Engaging with people of other faith traditions has generally resulted in greater mutual understanding and collaboration, but it has occasionally resulted in persecution and even death for Columban missionaries.

Nonetheless, the Columban mission work has built bridges and understanding between faiths.

As the world becomes more globalized and peoples migrate for economic opportunity, the Columban engagement with non-Christians will undoubtedly increase. 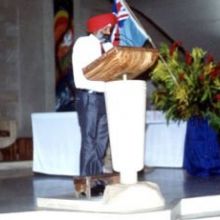