As long time benefactors of the Columban Fathers, Paul and Marge share their thoughts on why they made a legacy gift to the Society: 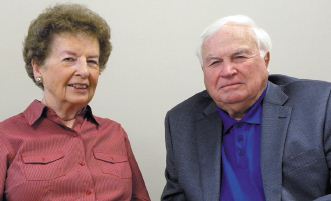 “In the late 1950s, we moved to Bellevue, Nebraska. At that time, the Columbans hosted an annual festival in the summer. We decided to volunteer at the festival since, as parishioners at St. Mary’s in Bellevue, we knew many of the Columban priests who said Mass at St. Mary’s and it seemed like a good way to get involved.

"Soon, our relationship with the Columbans deepened and evolved beyond festival participation. We are delighted to have developed friendships with so many of the Columban Fathers over the years. They are truly ‘priests of the people’– down to earth, easy to relate to, and genuinely interested in others.

"After so many years of friendship with the Columbans, we decided that we wanted to make a legacy gift. God has richly blessed our lives, and we wanted to give back in a way that would benefit others.