The theme of the October 2011 issue of Columban Mission magazine was Catholic Social Teaching, focusing on Columban social activism in the various mission countries, including Peru, Japan and the Philippines.

The Columbans have a long history of fighting against human trafficking, Third World debt, worker exploitation, poverty and other social ills. One of the Columban organizations that figures prominently into this quest for social justice is the Washington-based Columban Center for Advocacy and Outreach or CCAO.

With globalization and economic expansion come greater potential for exploitation, and the CCAO and the Missionary Society of Saint Columban stand at the forefront of the struggle against it. 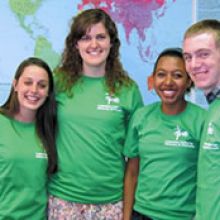