One hundred years ago, two young Irish priests, Edward J. Galvin and John Blowick, established a branch of the Missionary Society of Saint Columban, colloquially known as the Columban Fathers, in the United States of America, specifically the Omaha area.

Galvin and Blowick had founded the Maynooth Mission to China in 1916 in their home country, and decided to expand it to the U.S.A. In 1918, albeit with the change of name to the Columban Fathers, the two Fathers accomplished this goal.

In 2018, the Columban Fathers in the U.S. marked the centennial of their Society with celebrations at the Columban property in Bellevue, Nebraska, as well as at Columban mission units all over the world.

Sister Angie Dries’ outstanding book, Be Centered in Christ and Not in Self, which documents the history of the Columban Fathers in the U.S., was also released in 2018.

The Columban Fathers have been through a century of hardship and tribulation, but most of all, success and growth.

In the year 2018, the Columbans could look back on one hundred years of achievement in spreading the Christian message and doing good works all over the globe, with more great accomplishments and adventures ahead. 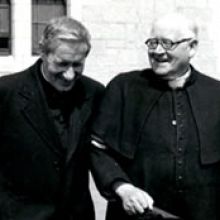