On the Edge of a Cliff

How many times has someone climbed a mountain only to find that they are still not at the summit? And, in fact, a cliff lies between them and the higher peaks. Throughout history, humanity has passed through different crises such as wars, natural disasters, and epidemics. Because such calamities can bring us face to face with the limits of our existence, they can have a huge impact on humanity. In our current situation, we are facing a force which we cannot see,or control, and this invisible virus has brought us to an existential cliff. We thought that we had things pretty much under control, the economy was strong enough for us to live well, spending our time searching for the latest phone or best television. However, this virus has made us realize we are vulnerable, and the resulting fear has made us remember that we need each other to survive. 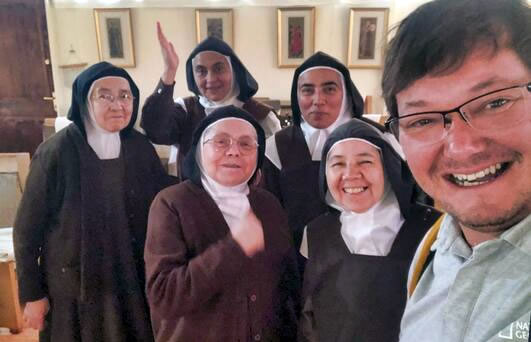 During this time of pandemic, I have watched the world news talk about Covid-19, how many people are infected, how many have died, and the safety measures implemented by the various governments. After much effort, Korea has reached a point where we think we are in the safest place in the world. However, in the middle of this situation, I have observed that we have not been abandoned and indeed have seen the presence of God in so many doctors, police, and workers who are risking their own lives to help those struggling, suffering, and mourning. The number of religious men and woman who have given their lives consoling families and friends and spreading hope in Europe and the United States has made me realize that that the church is not about buildings. It is not only ritual sacraments that show forth the presence of God, the presence of God is a constant sacrament. The challenge facing us is to celebrate that presence of God through the everyday encounters of life.

On a local level, the Korean government has done well in controlling the number of people infected with coronavirus. I would say that discipline, the strong sense of togetherness, and caring for each other, the markers that make this culture unique, have played roles in controlling the infection rate. However, I see a danger in thinking that everything will be fine: when we thought things were improving, we had two fresh outbreaks that reminded us that the virus was still here. I would say that as a society the only way of controlling and eventually defeating this virus is to go back to the traditional values of togetherness and caring for others. Interestingly, our faith also emphasizes these values, which can help us to face this existential cliff with hope.

On the level of Church in Korea, the decision was made to close church doors and postpone public activities. That, I think, was the best decision possible in the circumstances, to take care of the most vulnerable, kids and the elderly. Personally, and as a follow on to this, I think this is the time to look for new ways of being Church, and I strongly believe the Spirit is pushing us towards that. However, since the closure of churches priests have started celebrating online Masses, which led me to ask if such Masses were the community's need or the priest’s need to make himself feel useful?

Consequently, I want to pose a question: are priests only for celebrating Masses? Is the Church and our understanding of it in line with the times or do we need to rethink our idea of Church? If we follow the etymology of the word ‘church’, we see the German kirche which means a consecrated building administrated by the clergy. In Korea, I think, we are pretty much into that conception of church, so it is not difficult to understand why, as soon as public Masses were postponed, priests retreat into their rectories and wait until Masses can resume. Instead I propose to move from kirche to Ekklesia, the Greek origin of the word Ecclesia, which means popular assembly.

On a personal level, I was wondering how I might give a word of hope to the migrants here in Suncheon? This is difficult because I have no office and according to the sister in charge of the migrant center, my job is only the sacraments and Masses. However, I think the role of a priest is more than presiding at Masses and offering sacraments. During Holy Week in most parishes the priest and religious communities celebrated together, but they did not consider me since perhaps I am not a Korean priest. Sometimes I am wonder if the local church here is prepared to work with foreigners hand in hand.

Now, here in this part of the country Masses have resumed, but only for locals – if there is not another outbreak, the migrant Masses are not going to resume until next month. The question is, if our focus as Church is the marginalized, poor and oppressed, and migrants belong to this group, why is it necessary to keep the doors of the churches closed to them? Is the Catholic Church in Korea in the right place? Especially when we consider that catholic means universal. I would like to ask is the Catholic Church in Korea truly catholic? I am asking this because if the structures of the institution do not help people, it is time to move where the Spirit is leading us and build along with God´s people the Kingdom of God in different ways. Then we will have the courage to stand on the edge of the cliff and jump into the unknown and transform the meaningless into the meaningful in Christ.