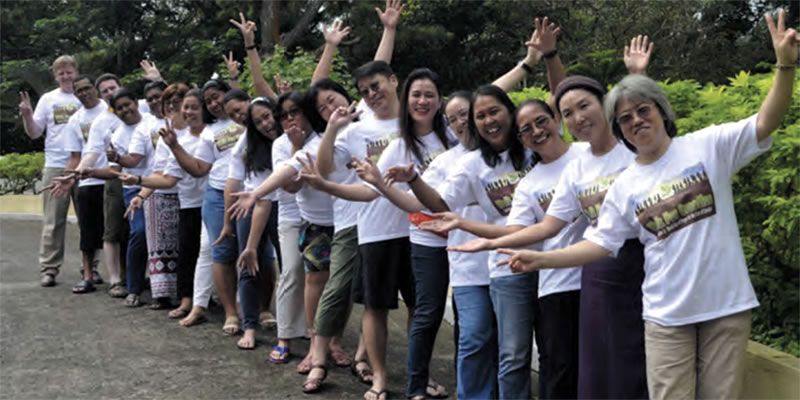 2020 marked the 30th anniversary of the Columban Lay Missionary (CLM) program. Looking back on the past three decades has made me realize how far we have come to where we are now, the progress made, and the contribution to the mission, the Missionary Society of St. Columban and the Church.

As I was preparing for this reflection I came across an article about the metaphysical properties of a pearl. Knowing that the pearl is the gemstone that marks a 30th anniversary, I wanted to delve into whether or not there is a connection between the CLM history and the gemstone pearl.

The Beginning of a Pearl and CLM

When a pearl is created, it is the result of an irritation to the soft body of its host mollusk. This irritant can be a grain of sand, but is more often a parasite. Because of this unique process, pearls are the only jewels created in partnership with living creatures.

Since the beginning, the Missionary Society of St. Columban has been blessed with generous lay people who worked side by side with the priests in mission. The Society’s 1970 General Assembly participants, in response to the Second Vatican Council, stated that the lay missionary movement might be the beginning of something even bigger than our dreams. During the 1976 General Assembly, the Columbans decided to initiate the participation of lay people in their missionary work. In the succeeding years, Columbans explored and worked toward the greater involvement of lay people in the Society’s cross-cultural missionary experience. Between 1981 and 1988 there was an interchange of groups of lay missionaries between Regions and Mission Units: lay missionaries from Ireland, Australia, Philippines and the United States were sent to the Philippines, Chile, Britain, Pakistan, Japan and Taiwan.

I developed a deeper understanding of my vocation and God’s mission. The experience of collaboration and partnership inspired and encouraged me as a layperson.

Pearls are considered to be the only gems born from a conscious nurturing process, as their origin is a result of a living-being choosing to self-nurture. Similar to a pearl, CLM was created through a nurturing process of partnership. The 1994 General Assembly document stated that partnership is the preferred way of being on mission today, and the 2012 General Assembly document stated that partnership between ordained and lay missionaries is our way of being on mission. We, Columban lay missionaries, continue to seek opportunities to strengthen partnership among ourselves, with the ordained, students, priest associates and co-workers.

My Own Development in CLM

I joined CLM in 2005 and was assigned to the Taiwan Mission Unit for my first mission assignment. Through my experience in Taiwan, I developed a deeper understanding of my vocation and God’s mission. The experience of collaboration and partnership inspired and encouraged me as a layperson. I witnessed how Columban mission had evolved in the Mission Unit when the new Mission Unit structures, approved by the General Council, allowed for the appointment of a lay missionary to the role of Mission Unit coordinator. In my seventh year on mission, I was appointed as the first lay missionary Mission Unit coordinator in Taiwan. I was initially overwhelmed to take on this role and responsibility, however I was profoundly grateful for the patience and support of the Columbans in the Mission Unit. With their guidance and trust, I was able to thrive in my role. It was an affirmation that through our baptism, all of us are called to be missionary disciples, to be sent by Jesus and to speak on His behalf, not on our own.

Pearls have long been considered beacons of light for those who see the world through spiritual lenses. May the gemstone pearl be our inspiration.

The 2018 General Assembly recommended that, in order to CMenhance our model of partnership, the coordinator of the CLM Central Leadership Team be the CLM delegate to the General Council. Since the current General Council started their term in office I have been joining their meetings and participating in Society discussions within my role as the CLM delegate. This is a further affirmation of how CLM has developed within the Society.

We give thanks to the Missionary Society of St. Columban for the gift of the opportunity to work in partnership for God’s mission; for all the CLM leadership (CLMs, former CLMs, ordained Columbans, priest associates and co-workers) who tirelessly dedicate themselves to find ways to develop CLM; for those lay missionaries before us who paved the way for us all; to our benefactors and supporters for their generosity and enthusiasm; and for those people among whom we live and serve for their warm welcome and allowing us to touch each other’s lives.

A Year of Challenge and Opportunity

The past 30 years of the Columban Lay Missionaries, and in the face of this year’s COVID-19 pandemic, has shown how we have stood together, and in solidarity with the people to whom we have been called to serve on mission, particularly in testing times, and how we continue to be open to bright prospects for our future service in mission.

Pearls have long been considered beacons of light for those who see the world through spiritual lenses. May the gemstone pearl be our inspiration as we continue to respond to our baptismal call and work in partnership among ourselves, ordained, students, priest associates, co-workers and with the people in our ministries with whom we work and serve for the life of the world.