A Bridge Across Boundaries 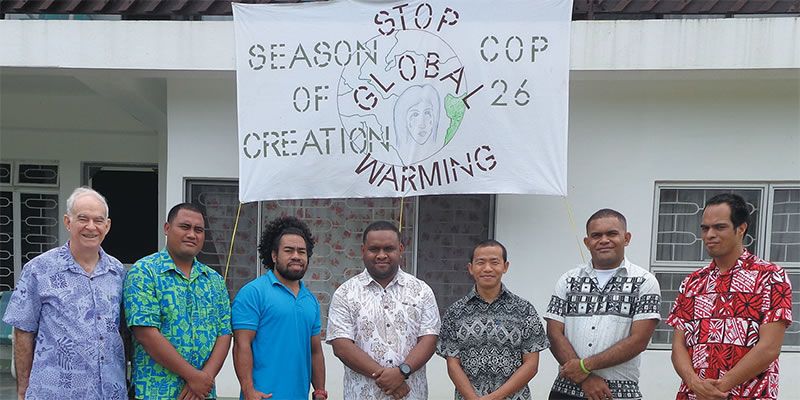 Fr. Frank Hoare (left) and members of the Formation Community

The Magic of Music

Fiji’s Archbishop Peter Loy Chong, like many others, realized the importance of social media when COVID-19 caused all churches to be closed down. English is seen as the bridge language in Fiji where many ethnic groups live. Therefore, Mass in English was quickly arranged for the Archdiocesan Facebook page. Then it was realized that Mass in the Fijian language was needed to cater for the majority indigenous group who, naturally, prefer to worship in their native language.

But the Archbishop was anxious to cater for the minority ethnic groups also. So a Kiribati priest accepted to say Mass in Kiribati for the Kiribati people living in Fiji. He then requested the Indo-Fijian rector of the seminary to be responsible for Mass in Hindi. The rector asked three Columban missionaries to take turns helping out. I was helped by the six Columban seminarians in our formation house in Suva when it came to my turn. None of us was ethnic Indian, and we had various proficiency in the Hindi language – from none to quite good.

Our two guitarists were new to Hindi, but they quickly learned to sing and accompany some Hindi hymns and parts of the Mass. We sang a communion hymn in three languages: Hindi, English and Fijian and included prayers of petition in the same three languages. Two of our seminarians read the first two readings in Hindi very well. I used visuals on share screen during the homily, and we put the words of the readings and hymns on screen too so that viewers would be able to follow.

Two technicians from the Archdiocesan Communications Office did the video and uploaded the Mass from our chapel in the formation house. The technicians didn’t understand Hindi so a seminarian who did would signal when to change the screen.

It was the first Sunday of the Season of Creation. We had green plants and small shrubs in the chapel, and the homily emphasized the climate crisis and the need for world leaders to make massive carbon emission reductions.

Although none of us participating live at the Mass were ethnic Indians we all appreciate the beauty and devotion of Hindi hymns. It was a very joyful celebration and hundreds followed it in Fiji and abroad on Facebook. We received many notes of congratulations.

It brought home to me how music is a most valuable path for entering another culture. It helps us learn the language and appreciate the spirit of its people. Local people appreciate foreigners who take an interest in their culture. Our musicians will have a great advantage when they arrive in a new culture as missionaries. They will quickly connect with the people through their music and song.

I also saw how cooperating in a challenging project helps to build community among those involved. Our little group felt satisfied, indeed overjoyed, to have accomplished the worship of God and service to people who thus felt acknowledged and included in the life of the diocese.

The seminary rector congratulated us and asked when we could do it again!