The Call to Justice 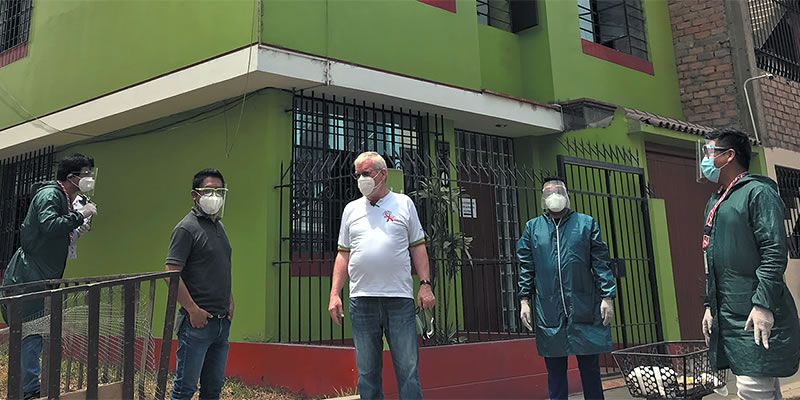 How I Became a Human Rights Advocate

An Interview with Fr. Cathal Gallagher by Fr. John Boles

Fr. Cathal Gallagher recalls the incident vividly. “It was in 1998. I was working in a poor parish in Lima. I got a call from a local clinic, run by the Mercy Sisters, saying someone was having a serious panic attack. I went over. The man there was in a real state. Kept saying, ‘My brother died last night’.” Fr. Cathal, recognizing him and thinking he was all confused with grief, assured him, “No, he died last Friday. I did the funeral.” “NO,” the man insisted, “my OTHER brother. HE died last night!”

The man had lost his two brothers in a week. Both had died of Aids.

This was the pivotal moment which Fr. Cathal reckons changed his life. Or, it might be more accurate to say that it was one of a whole series of life changes that have seen him moving from being a policeman in his native Ireland to a Columban missionary priest in Peru, where he dedicates much of his time to caring for people infected with – or affected by – HIV/Aids.

Yet, by Fr. Cathal’s own admission, this remarkable journey began in a very conventional fashion. Born in 1951 in Co. Fermanagh, Northern Ireland, Fr. Cathal grew up in what he remembers as a “typical Irish Catholic family” of the time. “Rosary every night, Confession every Saturday, a boarder at the local Catholic grammar.”

Being from Northern Ireland, justice issues were always important to Fr. Cathal. Maybe it because of this that he felt attracted to public service, and at the age of 20 hopped over the border to join the garda siochana (or, “the guards”), the police force in the Republic.

“I enjoyed my time in the guards immensely,” he remembers, in spite of what he describes as a few “hairy experiences.” It was the 1970s, the height of “The Troubles.” Yet, after just six years, he took the radical decision of quitting the police and entering the seminary. Why priesthood? Why the Columbans?

“I’d had an inkling of ‘something else’ calling me, ever since I’d been an altar boy back home,” Fr. Cathal recalls. “Also, I’d always been interested in mission. The Far East (the Columban society magazine) gripped me.”

Another factor was that the Columbans’ main house in Ireland, Dalgan Park, was only a stone’s throw from Navan, where Fr. Cathal was based as a policeman. He used to pass the entrance to Dalgan nearly every day. “Finally, I decided to drive in. Just turned up at the door. Asked to speak to a priest. Took it from there.”

One step led to another, and he joined the Columbans in 1979, did his priestly formation in Ireland and overseas in Chile, was ordained in 1985 and appointed to Peru.

For most people, Fr. Cathal had already run up enough vocation changes to last a lifetime, but more was yet to come.

“Accomanying suffering was the key,” he explains. He’d seen suffering caused by “The Troubles” in Ireland. He’d seen it in Chile, the product of a brutal military dictatorship. He met it on arrival in Peru, where the Maoist insurgency of the notorious Sendero Luminoso (“Shining Path”) group caused havoc from 1980 to 1995. Finally, he saw the suffering inflicted by the AIDS epidemic which was ravaging parts of his parish in the 1990’s– epitomized by that heartrending tragedy of the death of the two brothers.

He decided to act. Again. “Two main driving forces in my life have been justice and rights,” he affirms. “As a priest. As a cop.” So, he went twice to London, first becoming a psychotherapist and then gaining experience as coordinator of the multidisciplinary team working to protect the health and promote the rights of those with HIV.

Returning to Lima, Fr. Cathal set up an organization to put into practice all he had learned. He called it, “Sí da Vida” (roughly transated as, “Yes to Life”). “Human dignity was the focus, fighting the discrimination that people living with HIV/Aids experience in Peru.” His guiding light was the idea of “responsibility”, or rather, “response-ability” – helping people respond to new situations in their lives, and giving them the tools to do so.

He implemented the Positive Self- Management Program (developed at Stanford University in the U.S.). This promotes a “social model of health care.” People are taught how to manage their own chronic health conditions. They are also educated in prevention, with former participants going on to become instructors.

Almost 20 years on, the results are impressive. Supported by funding from the Irish government, the Columbans and private benefactors, “Sí da Vida” now boasts a center and a dozen staff, including doctors, psychologists and social workers. Some 400 instructors have been trained, around 4,500 people have benefited from the programs and a much wider population have received prevention education through talks, literature and the center’s own radio station.

The staff liaise with government agencies and the police. Volunteers go into places as varied as universities, hospitals, prisons and discos. They always concentrate on the poorer areas. “We go to the people; we don’t wait for them to come to us,” Fr. Cathal affirms.

Today, Fr. Cathal divides his time between “Sí da Vida,” his role as Director of the Columbans in South America, and the driving force behind an inter-agency network responding to the effects of the Covid emergency in North Lima.

It seems as though he has been ticking off all the “Ps”…from police to priesthood to pstchotherapy to Peru. To continue with the alliteration, it has all been an extraordinary “pilgrim’s progress” for Fr. Cathal Gallagher.

Columban Fr. John Boles wrote this article based on interviews with Fr. Cathal Gallagher. Columban Fr. Gabriel Rojas and Columban seminarian Atonio Saula Seeto provided the photos. All are on mission in Peru.