Christmas in the Andes 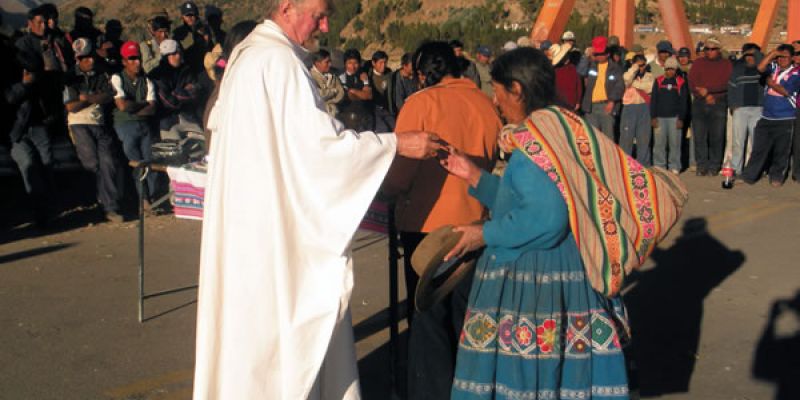 Christmas in the Andes

The True Meaning of Christmas

Where will the Christmas Festival for the communities be held this year?" asked Carolina, the Coordinator of the active Christian community of Chosicani, one of 20 Christian communities that make up the rural parish of Combapata. This parish is located at 2.3 miles high up in the Andes Mountains of southern Peru. While Spanish is spoken in the towns, Quechua, one of the indigenous languages of Peru, is the language of the villages and rural areas like Combapata.

"We will decide on Saturday at the Parish Council Meeting," I told her, "so remind Leonardo and Catarina to come with you." When Saturday came, we decided that we would hold our Christmas Festival for 2013 in Jayabamba, one of the communities that makes up the parish.

Each year many activities are held to prepare and celebrate Christmas. Novenas are held in houses where a statue of the "Niño Jesús," (the baby Jesus), is carried in a procession with songs from one house to the next and placed overnight in the crib that the family has prepared. Often there are hundreds of statues of animals in and around the crib, a custom begun by St. Francis.

But the principal event for years in the parish has been the Communities Christmas Festival. Each year it is held in a different community on a rotation basis, which explains the question of Carolina and our decision to choose Jayabamba for 2013. Every community is invited to participate in this Christmas Festival, even though for some like Carolina's community, Chosicani, which is almost 10 miles from Jayabamba, it means hiring a Combi van to get there.

It is up to each community to decide how they will present the "Nacimiento" (Nativity Scene) to the other communities at the Festival. They must also decide who will play the parts of Mary and Joseph, the baby Jesus, angels, magi and shepherds who often come with live sheep.

One year, Joseph obtained a donkey for Mary to ride on, but the solemnity of the occasion was lost when he helped her on with such a strong lift that Mary catapulted over the donkey and landed on the ground on the other side! Some communities might begin with the story of the Annunciation, so much practice is needed to learn all the dialogue in the Quechua language.

When the details of the "Nacimiento" have been worked out, the next task for each community is to choose and practice the "Villancico" (Christmas carol) they will present at the festival. Usually this is done by the children of the community who enter into the singing with great enthusiasm.

When the awaited day finally arrives, the group from each community assembles in the open space in front of the Church, such as the Jayabamba Church. Here the festival begins with the singing of Christmas carols, a Bible reading and prayers. After this, lots are drawn to decide the order in which each community will present their Nativity scene and sing their carol. The visual presentation of the scenes makes a great impact and helps those who do not have the habit of reading to deepen their appreciation of the love God showed in sending His Son to become one of us.

In the first years of the festival, it was held as a competition with prizes for the winning communities, but this often led to rivalry and dissatisfaction. "We should have won because we were the best." To capture the true spirit of Christmas, the competition was eliminated and now everyone wins and receives a prize, generally a Bible, altar cloth or container for holy water in the chapel.

Gift giving at Christmas is not part of the tradition. Commercialism and the barrage of "so many shopping days till Christmas" has fortunately not reached the rural villages of the Andes, so there is more focus on the true meaning of the birth of the Saviour. I still remember vividly one year when I was invited to a Christmas party for pre-school children. They did receive little presents of dolls and plastic cars, but after looking at them for a minute, they threw them aside and all began playing together with the balloons that decorated the hall. Perhaps they understood better than us the true meaning of Christmas.