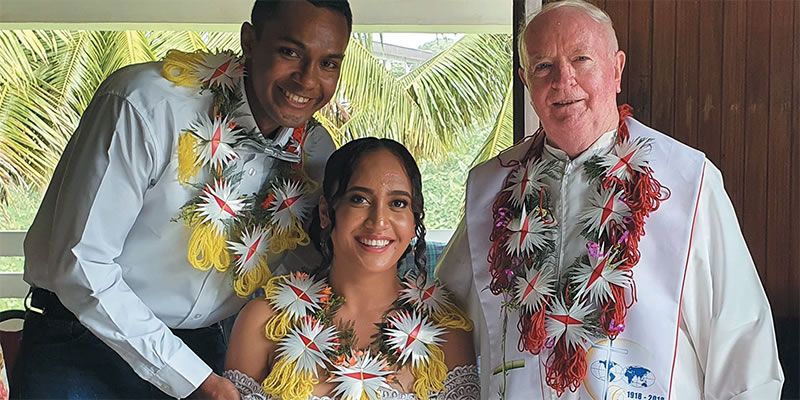 Jonathan Kunau and Hilda Vukikomoala had planned their wedding a year in advance. Since both of them were members of big families, they wanted a big celebration of their two families and friends (in excess of 200 guests). They had booked a fancy hotel in Suva, Fiji, for June 6, 2020.

The sixth of June was an important date for this couple. When they were high school students, Jonathon at Marist Brothers and Hilda at St. Joseph’s Secondary School, they met for the first time. It was at a Marist Brothers school function on the June 6, 2012, the Feast day of St. Marcellin (founder of the Marist Brothers). They were engaged on June 6, 2019, and they would plan their wedding for June 6, 2020.

But in March 2020 Covid 19 struck not only in Fiji but also throughout the world. Here in Fiji, churches were closed for public worship, and only twenty people were allowed to attend functions like funerals and weddings.

But Jonathan and Hilda were determined to go ahead with their wedding on June 6, 2020. We considered holding it in the church with the allotted number of people allowed (20), but eventually it was decided it would take place in their home. This would mean they had only one place to decorate, i.e. their home – but still sticking to the allotted family numbers allowed to attend. In recent times our Archbishop was not worried where couples had their weddings, especially when so many tourists come to Fiji to marry. He maintains that a wedding can take place in any sacred space/place. He is a great advocate of Laudato si’ and the sacredness of the earth would not be opposed to a wedding taking place in a home especially under such present circumstances.

And so it was – on June 6, 2020, fourteen members of their immediate families gathered and transformed the house into a place of beauty for the occasion. Present were Jonathan’s parents and three of his grandparents, Hilda’s sister, Aunt and Uncle and two of her grandparents (fourteen in all including the photographer and the priest)! None of Jonathan siblings were present which of course was a source of disappointment. The setting was beautiful, lovely and homey. The celebration of the wedding Mass was as solemn as any celebrated in a cathedral or big church. Jonathan’s mother, Essie, who is a member of the parish choir directed those who were willing and dared to sing a few hymns.

When the register was signed and the feasting and drinking got underway, it was easy for the two families to meet, chat and compare notes as how the lockdown affected them over the last months. Even the priest had no trouble in getting to know all present on the day!

There was yet another reason why Hilda, in particular, wanted to have her wedding at home. The house was owned by her Uncle and Aunt and in the garden of the house there were three large coconut trees growing. It is the custom in some parts of Fiji, that when a child is born the umbilical cord is planted with a young coconut tree. This was the case with Hilda. In this house her parents placed her umbilical cord and later on those of her sister Tiresa and her brother Wayne with a young coconut tree when they were born. She would see this day as a very special connection with nature and her growth. The Fijians believe that this ceremony will prevent the child from becoming mischievous in life. From our photos it is obvious that Hilda has grown into a most gracious and lovely young lady!

In the end, it was obvious that Hilda and Jonathan’s wedding had to be on June 6, pandemic or no pandemic! 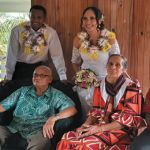 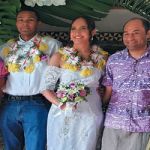 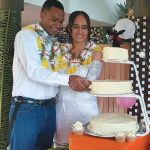 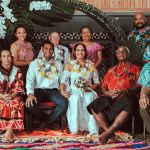