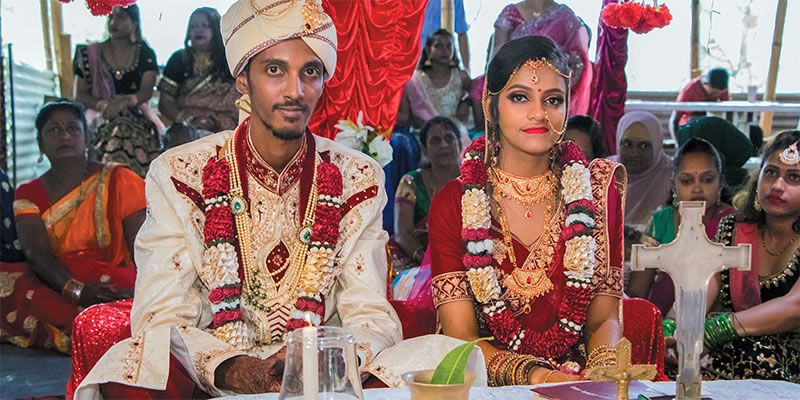 The marriage ceremony was almost finished. It was time for the civil wedding. The groom’s younger brother had informed me that the witness from the bride’s side would be Durga Prasad. So to save time I had written this on the certificate before the marriage ceremony. Now the bride looked up from the certificate and gasped, “Durga Prasad was my grandfather. He is dead! Hans Raj here is the witness.”

Shocked, I heard myself say, “Maybe he can sign as Durga Prasad,” “No, the government registrar knows that Hans Raj will be the witness.”

So I crossed out Durga Prasad and wrote Hans Raj instead. That was the last, but not the only, hiccup!

This Indian wedding was to take place in the home of the bride near the town of Savusavu in Vanua Levu, the second main island of Fiji. I travelled with the groom’s party – my first time ever to do so. I arrived at the groom’s house in Suva, on the main island of Fiji, in the early morning. I was a stranger to most of the extended family gathered there. They appeared to look at me as though I was out of place.

Everyone was taking photos everywhere — at the groom’s home, at the airport, in the plane, on arrival, throughout the wedding ceremony and in all those places on the return journey. So I wasn’t formally introduced. I did manage to introduce myself to a few of the men in the travelling party of fifteen.

There were two problems. Firstly, the groom and bride lived on different islands – a 40 minute flight. The groom’s party wanted to get home that evening. The plane would leave Suva at 8:30 a.m. and the last return flight was at 4:30 p.m.

Secondly, Vanua Levu had just suffered massive flooding with serious damage to the main roads. We would have to bypass a broken section of the road by following the old dirt road. This meant a difficult two hour journey by road to Savusavu. We struggled in stopstart fashion through torrential rain and arrived at the bride’s house at 11:30 a.m. I began the wedding at 12:00 p.m. Time would be tight.

The wedding was between a Catholic groom and a Hindu bride and most of the guests were Hindus. I was relieved to see a group of Catholic Indo-Fijian friends from the next parish who were invited to sing at the wedding. The wedding was celebrated under a decorated canopy in the middle of a lean-to shed which was connected to the house. In the middle of the canopy was a small low altar, my chair at one end and a low settee at right angles for the bride and groom to sit in front of the altar.

We began with the formal meeting of the two families at the entrance to the shed. I prayed for continued respect, and unity between them. The emcee called on different relatives from both sides to meet. They exchanged a hug and garlanded one another. All were then seated.

The bridal party made a solemn entry from the house to the wedding canopy. On arrival she garlanded the groom and he, in turn, garlanded her and showed her to her seat on his right side.

It was a Catholic wedding consisting of Bible readings, hymns, homily, the exchange of vows, intercessory prayers, and the nuptial blessing. But the ceremony also included a number of colorful, traditional Indian rituals. This made the wedding more meaningful, especially to the Hindus present.

Quenching the Fire of Patriarchalism

One of the most touching rites is the kanya daan — the gift of the young girl. Just before the exchange of vows the bride’s parents support their daughter’s hands in their cupped hands with the groom’s hands below theirs. As the bride’s brother pours water over the hands on to a brass plate the parent’s tearfully withdraw their supportive hands allowing the bride’s hands to fall into the groom’s hands.

I had made a point in my homily of emphasizing the words of Genesis 2:24 “…therefore that is why a man leaves his father and mother, is attached to his wife and with her becomes one flesh.” The young man too must, at least psychologically, leave his parents.

After the exchange of vows the newlyweds, with clothes tied together by a ribbon, stood up to process slowly seven times around the altar. At each round they were to pour incense onto lighted charcoal in a container. I had suggested that instead of charcoal some hot cinders could be brought from a fire elsewhere. The bride’s brother arrived carrying a large iron bucket with flames shooting up from hastily lit sticks. The emcee, with quick presence of mind, gave orders for the fire to be extinguished. I handed him the holy water. He sprinkled it carefully so there would still be some hot embers but no flames.

This was followed by the couple taking seven steps together after making a commitment before each step to protect their marriage together. They then returned to the settee but this time the bride sat on her groom’s left.

I blessed sindur (red powder), a necklace called a mangal sutra (thread of joy) and two rings. While their heads were covered with a cloak, the groom traced a red line through the bride’s hair and a red spot on her forehead, and hung the necklace around her neck. Then, with the cloak removed, the couple placed a ring on each other’s finger. This Western symbol added the mutuality lacking in the other symbols.

Before the nuptial blessing I invited the both sets of relatives to bless the couple by sprinkling them with rice mixed with flower petals (the original confetti, I suppose). I breathed a sigh of relief then as the choir sang the final hymn, and I called the witnesses to sign the civil certificate of marriage. That is when I discovered that I had included a dead man as a witness.

We had to rush our lunch. The young people began a spontaneous dance. Then it was time for the bride to leave her family, relatives and friends amidst many tears. We stepped through the rain into the minibuses and set off for the airport. I didn’t even have time to greet my friends who had graced the occasion with their hymn singing. We made it just in time to board the plane.

Back at the groom’s house in Suva there were more photos as the newlyweds entered their home. Other close relatives came and all sat around in the sitting room drinking juice and eating sweetmeats brought from the bride’s home.

One of the groom’s uncles, in praising my Hindi, said that I must have an Indian girlfriend. Another uncle thanked me for the beautiful ceremony and said that when I visited the house again I should let him know so that he could come around for a chat.

I was happy that I had been able to share the Word of God and introduce the Church to the groom’s extended Hindu family. In the morning I was a stranger, but by the evening I was a friend.