"Father! Why Did You Come to Japan?" 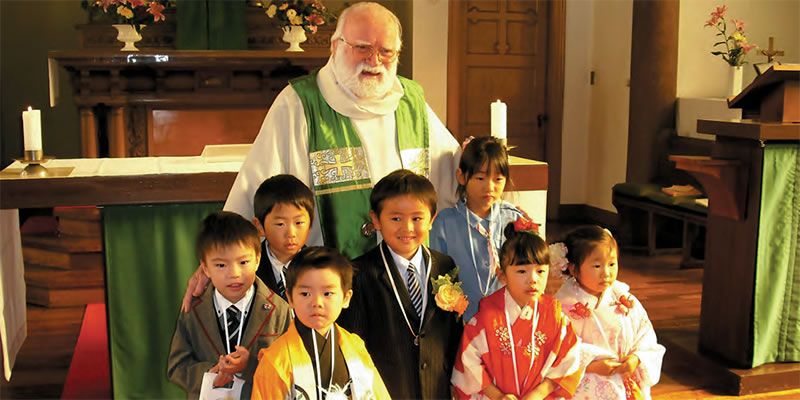 I never thought that my photo would be on the front cover of a book – admittedly with fourteen others! All of us, in our 80s, are foreign missionaries still working in Japan. The book in Japanese, is entitled “Father, why did you come to Japan?” with the further question: “Why are you still with us?” We fifteen missionary priests were interviewed by a Paulist Sister for the book. I am 88 and now semi-retired. I am a pastor and missionary in a very small parish in Yokohama City. So here are my answers to Sister’s questions.

In my last year of high school at times I had a realization that I possessed a great treasure in being a follower of Christ. I felt that I would like to share this treasure with others not so blessed. But then I also considered becoming a carpenter to build houses. I was better with my hands rather than my head. Well, I thought, let’s give the seminary a go! In 1949 I went to St. Columban’s to test my vocation as a missionary in other lands.

Then followed seven up and down years in the seminary. The two years of philosophy were agony! In the following four years of theology and especially scripture I felt more at home. But mission history and anthropology were my favorite classes.

In 1955, at age 24, I was ordained in my home parish of Sts. Peter and Paul, Lower Hutt, New Zealand. I received a letter from my superior: “Barry, you are appointed to Japan.” To tell you the truth, I was not happy at all! Could I survive another two years of intensive study in a difficult foreign language? I had failed Latin in my University Entrance Exam. Good marks in history got me through!

I arrived in Japan in 1956 after 31 days on a cargo ship from Sydney, with six port calls. After language school I was appointed to fishing villages. Japan was still staggering from the after effects of war. There was poverty, sickness (especially tuberculosis) and depression. Television had not yet come to the country villages where ancient customs and ways of thinking had not changed for centuries. I had learnt in my anthropology class for an expatriate to have a “cultural curiosity” towards one’s adopted country. Ask questions: Why? How? When? That was great advice! I came to know Japan and the Japanese and also began to learn the language.

But more was to come. I started teaching a class for people preparing for Baptism. I met Japanese with no religious affiliation and saw and felt the stark emptiness of their lives. One man said that his religion was the Osaka Hanshin Tigers baseball team. Having said that openly he realized how surface his life had become. My own faith strengthened together with the newly given faith of those in the class. The feeling of sharing a treasure that I had felt in high school came back to me strongly. I now belatedly thanked God for being so gentle with me by calling me to be a missionary in Japan.

One incident is still vivid in my memory. I was in charge of helping the poor with relief goods. One day a mother cradling her baby was in the queue. The baby was crying in gasps and was covered in a scarlet rash. I gave the mother rice and also a packet of milk powder. I told the mother that the milk was for her, not the baby. Two weeks later the mother returned full of joy. “My mother’s milk is coming again and my baby is getting better. “Arigato gozaimasu.” (Thank you).

After eleven years in Japan I got sick. I had big, fat swollen legs. It was beri beri and later complications. I spent nine months in the hospital. My faith, and consequently my call to be a priest, was sorely tested. The support of my Columban confreres and my parishioners helped me. I went home on sick leave. I was desolate. I thought that I had lost my faith. It took me three years before I realized that behind the sickness and desolation Christ was with me at all times. I feel I matured, both as a person and as a missionary priest. There is a Japanese proverb that says: “Suffering makes a jewel of you.” How true this was for me!

Then for thirteen years I was on the staff of the Columban seminary in Sydney as a spiritual director. I had a year with the Jesuits in California as preparation. I returned to Japan in 1983 after being away for sixteen years. It was a different Japan! My second culture shock was worse than the first! I was posted in three large and busy city parishes for 32 years. I am now, at 88, semi-retired as pastor of the smallest parish in Yokohama City (about 70 at Mass on Sunday). I stay in Japan because I feel called to live among the un-evangelized. I want to be beside the aged of Japan who feel so insecure about their future. I feel “at home” here, and likewise feel that the Japanese like me in their home.

Also I believe that the foreign missionary has a very small but important role in a church that even has many indigenous priests. We foreigners must be inculturated, but can act as a concrete example that the Church is for all nations –that it is truly catholic. Island countries, and their chuches, can become insular.

To enter the digital missionary era our parish evangelization team puts my Sunday sermon, in Japanese and English, on the parish home page. It is aimed at the myriad of shut-ins who surf the web. In each parish I have had a carpenter’s bench. Among the things that I have made are outdoor Christmas cribs. However, living in aged churches and rectories, I mend more than make and have become a carpenter!”

Finally, Sister asked me two questions: “What is your most pleasant, and your most unpleasant experience in Japan?”

My pleasant experience is this: The Bishop of Yokohama asked me to give a first-hand account of experience of mission to his seminarians. They come to the mission parish for weekends. I am now in my sixteenth year, so I know the young priests of the diocese and get on well with them.

My unpleasant experience is really trivial, but I still feel it! I was born in southern hemisphere in New Zealand. Christmas and its holiday means summer picnics and swimming in the sea. I still find a cold winter Christmas hard to take. I hear the song still popular in Japan: “I’m dreaming of a white Christmas.” It is never my dream! But I do let my snow white beard grow long. I dress up as Santa Claus for the children. We give them a small present, and I ask them to give their mothers and fathers a present by showing them at least one kind act. One mother told me that she wished there were 52 Christmases a year!

I feel called to be living among the un-evangelized nations, and pray with them and for them. I want to proclaim in a small way that our gentle God loves everyone unconditionally, as they are. It is by the grace of God that my enthusiasm for mission is still with me.”