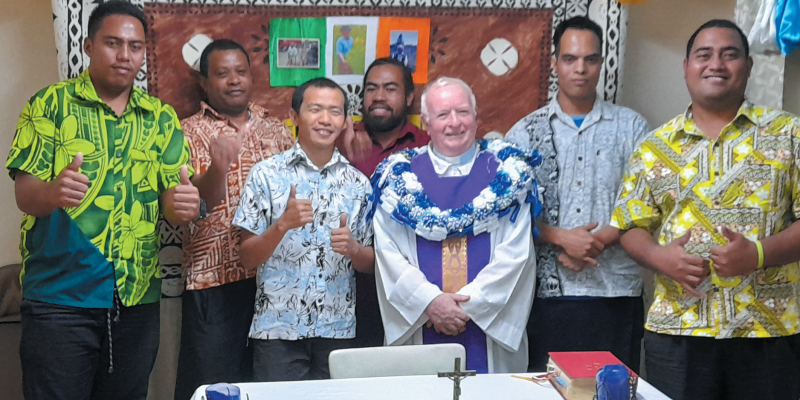 “Do this in memory of me.” Following Christ’s command, on Easter Sunday, April 2, 1972, Bishop John McCormack of Meath ordained John McEvoy and his nine classmates into the priesthood of Christ as Columban missionary priests in Dalgan Park, Navan, Ireland. Later that year, Fr. John left for Fiji and plunged into the study of the Fijian language. then came a series of parish appointments. The first one was in the Columban parish of St. Agnes in Suva. His friends from that parish still rally around when he needs them. This was the honeymoon but got him ready for a few tough years in his next Suva appointment, Tamavua. During this time, he had many side trips, at Christmas and Easter, to the outer priestless island of Kadavu.

One of his most taxing parishes was Vanuakula. This stretches for miles along the Wainimala river. Fr. John recalls crossing the river—by foot, of course—about 100 times each time he did his parish visitation of the villages. They are all scattered along the river. It would take a week to cover all the villages up the Wainimala.

He first stint as parish priest was at Vatukoula, a parish with a large gold mine. These were among his happiest years, he claims. The miners went on strike, and they found a good friend in their parish priest and a home in the presbytery though he was constantly threatened with having his power and water cut off by the mining company!

Then in the 1980s, as often happens with Columbans, Fr. John was invited to do promotion and vocation work in Ireland for four years. The success of this can be gauged by the fact that the current parish priest of Ba here in Fiji, Columban Fr. Pat Colgan of Belfast, Ireland, was recruited by Fr. John as was the current Philippine Director, Columban Fr. Paul Glynn in addition to the current Columban spokesman in Pakistan – Fr. Tomas King!

And, Fr. John has the distinction of having been to prison! Aft er the Fiji Coup of 1987, he and fellow Columbans, Frs. Paul Tierney and Tom Rouse, happened to be at an anti-coup rally in Suva. Eighteen were arrested and imprisoned in the central Suva police barracks’ jail overnight. This led to about thirteen court appearance during the next twelve months. The verdict was that the eighteen involved were guilty, but the judge dismissed the case.

It was while he was parish priest of the huge parish of Ba that I recall visiting him. It was just after Cyclone Kina had come through Fiji in December-January 1992-1993. Th is was the second largest cyclone to hit the country, after Cyclone Winston in 2016 with 23 deaths. Unfortunately, it swept through the main island resulting in the damage or destruction of the two major bridges in Ba and Sigatoka. Most of the damage was done in early January 1993.

A few days after this, with a Marist sister, I travelled to Ba to see how Fr. John was faring. The bridge was down, but small boats were ferrying people across the Ba River. When we reached the parish house, it was a mess, presided over by Fr. John who was trying to organize help for those in need in the parish. We were his first outside visitors. He was very happy to see us, and we experienced good Irish hospitality despite his having no electricity or water. We got a rundown on the damage done to the various villages near the river. After few hours we were ferried back to our car and left him to get on with the organization.

Then in 1996 he was appointed the Columban Director of the Fiji Region. He held this job for two terms, six years in all. During his first term as Director, he purchased a site from the Archdiocese and organized the building of our present Columban Central House here in Nasese. In 1997 we moved here from the parish of Tamavua.

At the end of his second term of office as Director, he was off to Ireland again, first to be the farm manager in Dalgan Park and then to be in charge of the half parish of Mucklagh in the parish of Rahan near Tullamore. While there he was able to spend time with his mother in her final years. Mrs. McEvoy died in 2013 in her 99th year.

He then came back to Fiji in 2015. He was appointed to Raiwaqa, the Suva Columban Parish. He did extraordinary work, renovating the parish, physically and spiritually. Once more he was chosen to be Director for the third and fourth time. He is one of few Columbans, I imagine, who has been Director or leader four times.

He refused any fuss, so we quietly celebrated his Golden Jubilee at the Columban central house. We had Mass and a small celebration with the Columbans in the Suva area. May the Lord give you many more years of fruitful labor in his vineyard, Fr. John–even after you finish this job on November 23. Ad multos annos.