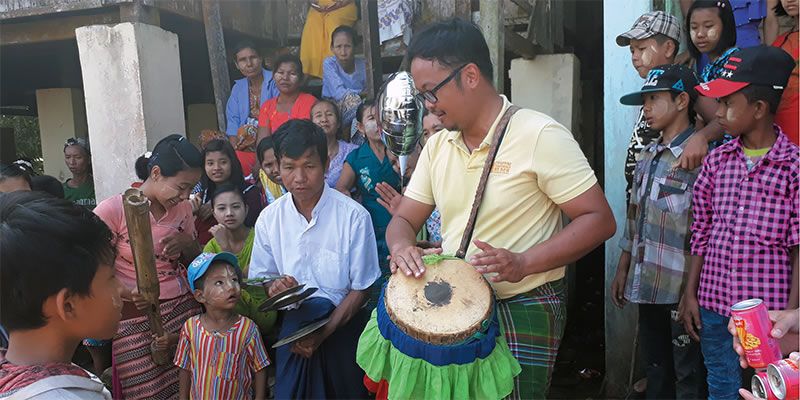 When I first arrived in Myanmar (formerly Burma), I had to learn the Burmese language for almost year. I attended daily classes with local teachers. One of them is Saya Zenry. He is a graduate of the Teacher’s College and during the holidays took time to teach Burmese to foreigners and earn some extra money before heading to the village to teach. There are very few male teachers in the country, because it does not pay much and demands a lot of work.

After almost a year of learning Burmese, I had to move to the north with the Kachin people which meant learning another language. I never lost touch with my Burmese teachers. Once a year I get to spend a few days of break so I decided to pay my teacher a visit. And it turned out to be an adventure. This was in November 2019.

Traveling by bus is a common way the locals move around the country. I got on the bus all the way from Myitkyina transferring only upon arrival in Yangon to Pathein. With my limited Burmese I am still able to communicate and find my way. Eventually I arrived at the stop he gave me, a small sleepy town by the river.

We went into the small town. Near the market is a small dock where boats come and go picking up passengers and cargo. Everything goes into the boat including the motorbikes. We moved up the river and ended at another dock. We waited until the motorbikes were unloaded. We then drove on the tiny road between rice fields. We passed by one of the two villages schools. But on the way, people were merrymaking and a loud blast of sound is heard–there is a big feast in the village monastery. People were making their offerings and dancing in the compound. Myanmar is a Buddhist country. The majority of the people are practicing Buddhists.

We arrived in the village of Seik Gyi, where he lives and teaches. He introduced me to the family who looks after him in the village. He showed me his tiny hut where he sleeps during the week. For the night we went back to the city of Pathein which is another 30 minutes by motorbike.

The next day we went back to the village school. Having told him I wanted to wear the teacher’s uniform, he kindly offered me his old one. I wore it to school like a local teacher. But before that we had to take a bath in the open. I took my longgyi out, wore it and took a bath like locals do. Longgyis are like sarongs or long skirts that are worn by both men and women in Myanmar. Filipinos also have them specially down south, and we call it malong.

After the bath, we took our breakfast and headed to the school. He introduced me to the school principal who turns out to be a Catholic. The children started coming into the rooms. One by one, they took off their shoes, arranged them nicely outside the door. They took their places in the classroom. Quietly, they sat in meditative position. They sat quietly for the next 15 minutes. Early on in their education, children learn to meditate in silence.

“Good morning children,” Saya Zenry said. “Good morning Saya!,” they responded. Saya is a Burmese word that translates to sir or teacher. Saya Zenry’s class is a mix of Grade 3 and 4 pupils. The whole school combined only has 24 students and four teachers. He has a mixed class of eight students. So he has prepared for all subjects and for two classes. This is just one reason why teaching is not for everyone. Teaching was my very first job straight after college. I started out as an English tutor to Koreans for a few months and eventually got a teaching job at a local private school. I only lasted for about seven months. But it was one of the most fulfilling experiences I have in my life. Although teachers do not get enough salary, teachers are highly respected together with parents and monks in Burmese culture. They are treated like gods. Saya Zenry explained that “Our parents raised us. Our teachers shared knowledge with us while the monks preached the Dhamma. For these reasons, they are considered blessings to us like God.”

Saya Zenry asked me to introduce myself and teach his students. I introduced to them the English children’s rhyme “Jack and Jill,” which was a first for them to hear. Singing with the children, I remembered my teaching days, stressful but meaningful. The class had to end and we said our goodbyes. We headed back to his home. Then later that day we went to the monastery to celebrate with the villagers.

Only through good and quality education can Myanmar progress and develop. That is why he wanted to be a teacher.

Today, Saya Zenry, together with many school teachers, joined the civil disobedience movement and stopped reporting to schools. Most children are not going to schools, too. It has been more than a year after the junta declared a martial law–taking control of the civil government.

After more than two years, I met again Saya Zenry who like many young people I know protested in the streets. I asked him why he wanted to become a teacher. He told me that it is a simple question but difficult to answer. He explained that he wanted and enjoyed sharing what he knows to the children. He wanted to change and improve the education system of his country and raise the standard of education by forming highly qualified teachers to educate the children of Myanmar. Only through good and quality education can Myanmar progress and develop. That is why he wanted to be a teacher.

He shared that his greatest dream in life is “to make the world peaceful. I want everyone in the world to enjoy fully their human rights.” But sadly, the political crisis in Myanmar is delaying the dreams of many young people including Saya Zenry. He added that the crisis has torn families apart. Some have died. Some were arrested. Some had to flee to liberated and safe areas. He lamented that “the army arrested many young men out of suspicion. Living conditions also become very stressful. I just want to leave Myanmar.”

“Good morning Saya!” is probably most what his students miss and want to greet him with again every single morning.