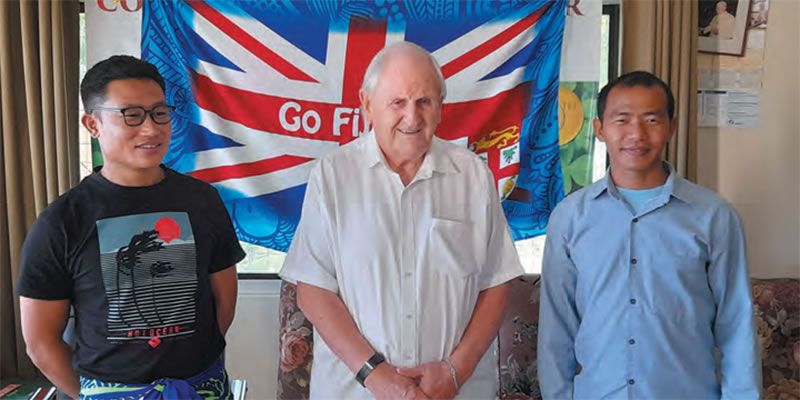 Francis Xavier La Aung Nbwi and Peter Kyaw Zaw (pronounced Cho-zo) are the first Myanmar seminarians to come through the Columban seminary system. They both grew up in the Katchin area of Myanmar, an area evangelized by the Columbans from the 1930s until 1979 when political events drove them out of the Myanmar (formerly Burma).

Francis is from the village of Mongkawng in the Diocese of Bhamo. Its first prefect Apostolic was Columban Mgr. Patrick Usher. Kyaw Zaw is from the Parish of Pang-Pau in the diocese of Lashio. In Pang-Pau parish they still talk about their last Columban parish priest, Fr. Michael Healy. Francis and Kyaw Zaw studied philosophy as diocesan seminarians and then joined the Columban program and continued their studies in Manila, Philippines. As part of the Columban formation program, a two year “First Mission Assignment” (FMA) is mandated for all Columban seminarians, and they were assigned to Fiji. I volunteered to coordinate the program. The FMA team also included in Columban Frs. Frank Hoare and Carlo Jung. Fr. Carlo from Korea had done this course under Fr. Frank about 10 years previously. Other Columbans, especially Frs. Paul Tierney, JJ Ryan and Patrick Colgan also lent a hand.

Kyaw Zaw arrived first on September 8, 2019. Since Francis was delayed, we asked Kyaw Zaw to study Fijian. He did this for six weeks living with a Catholic Family in the nearby Columban parish of Raiwaqa.

There are two major languages in Fiji. Fijian is the language spoken by the indigenous Fijians. For the Indo Fijians, Hindi is the language they use. Mostly they speak a Fijian dialect of Hindi but a more formal Hindi is used on important occasions. Hindi has its own script, Devanagari, and this must be learnt also. For all our FMA students, we ask them to learn Hindi first as, with a separate script, it is the more challenging of the two languages.

Francis arrived on November 24, and his introduction to Fiji was the ordination of Columban Fr. Teakare Betero in the distant island of Rabi. It took us 24 hours to get there by busses and boats. When we got back from Rabi, he and Kyaw Zaw were plunged into the mysteries of the Hindi language. They were blessed with two teachers, one to introduce them into formal Hindi and to teach them the script and another, after a few weeks, to help them come to grips with Fiji Hindi.

After Christmas they both moved to Indo Fijian families where they got to hear Hindi being spoken and had a living introduction to Indo Fijian culture. Then came the coronavirus pandemic out of the blue. It meant that we were all locked down in the central house. Thankfully, the students were able to continue their studies by Zoom, so their course continued. We also discovered their fine cooking skills. Things eased up after a while, and in May they were able to travel to the northern island, Vanua Levu, to the Naleba settlement in the parish of Labasa. Here they spent an initial month’s immersion to give them a feel of what was to come. Then they came back to Suva and completed the formal part of their study in September 2020.

After a vacation, they took up semi-permanent residence with two families in the Naleba area again. Now they were faced with surviving and trying to become fluent in the language and familiar with the culture. They encountered mosquitos galore and a lot of frustration with the language. They both persevered gallantly and emerged with a fairly good grasp of Hindi, local and formal.

After Christmas 2020 they moved into Parish life in Labasa. Kyaw Zaw moved to Labasa Presbytery and took part in the parish. Francis moved to the Naleba chapel and mission house and assisted the local catechist to run the Naleba section of the parish. We used to joke with him, calling him the parish priest of Naleba.

This was also a difficult time for them as in February 2021 there was a military coup in Myanmar, which caused them both great anguish. They were scheduled to travel home to Myanmar in May when their FMA course ended. This was now impossible.

Things got worse. In April 2021, just before their course ended, Covid struck Fiji with a vengeance. All inter-island traffic was banned. We had their final evaluations by Zoom. They were forced to stay in Labasa Parish.

They are both in their last year before ordination. Kyaw Zaw had a valid visa to enter Manila and continue his studies but Francis did not. Eventually after many Covid fueled stops and starts Kyaw Zaw left for Manila on September 7, 2021. Francis had no option but to continue his Manila Theology Courses by Zoom from Suva. He moved to the Suva Formation community and studies there.

It has been a historic time for the Society of St. Columban. Francis and Kya Zaw are our first ever Myanmar Columbans. Their journey has not been an easy one, through Covid and coups, but thank God and St. Columban they have had a successful landing. Please pray for them and for Columban Mission worldwide.