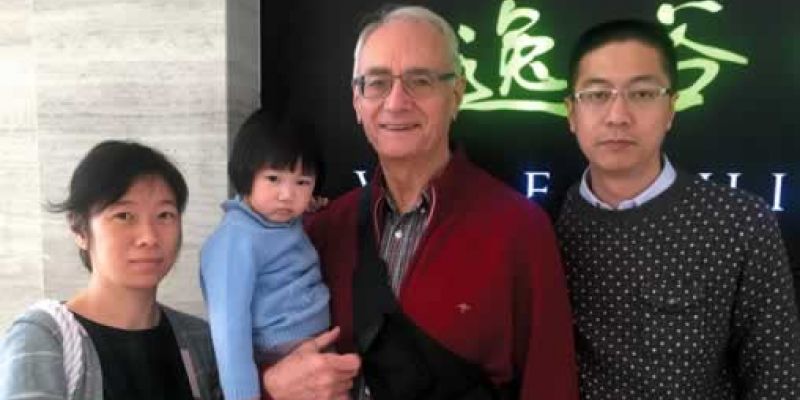 Fr. Warren Kinne with Vincent, his wife and daughter

It is said that history has a habit of repeating itself. This seems to be so in one particular case at least. In June 1920 when Columban Frs. Edward Galvin, John Blowick and Owen McPolin were on board the Yawata Maru docked in Shanghai, Nicholas Tsu1 and Lo Pa-Hong2 were there to meet them3. Eighty years later, in 2000, when I came to take up residence in Shanghai after three years language study in Beijing, the great grandson of Nicholas Tsu, named Vincent, was there to meet me. He was the son of a Teacher Zhu working in Guang Qi Press where I used to help out. Vincent and I had frequent outings together, and he was very helpful for me in bargaining when it came to shopping and in fixing my computer. Only later was I to discover that Vincent was the great grandson of Nicholas Tsu. Quite a co-incidence! This family is also related to Ma Xiang Bo, the founder of Fudan University. He was the uncle of Nicholas Zhu. By chance, I was also to teach at Fudan University for ten years, and I had that remote connection with the former Jesuit Ma Xiang Bo as well. Recently Vincent and his wife had a daughter4 and my hope is that she can bear the memory of the relationship of the Columbans with the Zhu family.

Nicholas Zhu was a ship-builder and one of the large compradors5 of Shanghai. He was also a very prominent Catholic who funded many schools and hospitals and other charities and who took the Gospel and its works of mercy seriously, even to visiting prisoners. In 1937 he was to receive a Papal award. When the prayerful man died in 1955, he was in his 90s.

As an aside, Nicholas had a younger brother who became a Jesuit priest and later one of the six Chinese bishops consecrated in 19266. Through the generations there have been a good number of priests and Sisters in their extended family. Later in June, when the three missionaries were to have steamed up the Yangtze for several days and docked at Hankow, the nephew of Nicholas Zhu was there to meet them and to put himself at their disposal.7

Another person on the docks in 1920 to meet our Frs. Galvin and Blowick, our co-founders and first missionaries, was the son of Joseph Lo Pa Hong, the famous businessman and philanthropist. A friend of the Columbans, Theresa Wo Ye knows direct descendants of Lo Pa Hong through Bishop Jin, and I had a most pleasant meeting with them. Theresa8 is the grand-daughter of Lu Bohong and “Crystal” his great grand-daughter9.

The following day10 after the three Columban’s arrived in Shanghai they celebrated Mass at St. Joseph’s Hospital. This hospital used to be in the compound of what is now the Gongyi Xintiandi which was only officially opened in 2013 as a platform for various social innovation and charitable activities. This is a most interesting site. Lu Bohong bought this land in 1913. Two years previously, in 1911, he was the Director of a newly built Government charity but in1913 he moved the charity to the new site that is now preserved. There was a school, a workshop, a hospital, a kindergarten, retirement facilities all dedicated to helping the disadvantaged people. It was called Xin Puyu Tang after the old charity called Puyu Tang.

There are some incredible statistics on the new notice board at the recently opened site which came close to demolition but was finally preserved. The land is now extremely valuable. The notice board says that in the first six years of operation, Xin Puyu Tang adopted 102,525 orphans, treated 2,194,070 patients and became the top example of social philantrophy in China. Lu Bohong’s photo is there with a chest-full of awards some of them papal. Indeed his family had the first Vatican approved – for China – private chapel in their home.

In the tumultuous times of 1937 when most of the family fled China, Lu Bohong was murdered on the eve of his departure for Hong Kong. The story has it that he was on his way to Hong Kong when he went back to distribute clothes to the homeless. It is not known who or what group was behind the assassination – Japanese or Communist or Guomindang or someone else.

It is fascinating for me to know the direct living descendants of these two families who were featured in the first steps of the Columbans in China.

After many years in China, Columban Fr. Warren Kinne now lives and works in Australia.