The Holy Family of Today 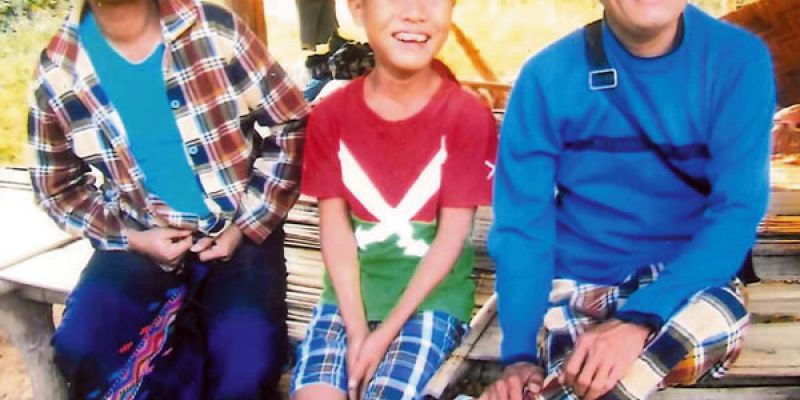 Living with the HIV virus

Columban Sister Mary Dillon works in Myanmar amongst those living with the HIV virus. We publish below her letter of thanks to her supporters.

On behalf of all the patients that we minister to daily I want to say a very sincere "thank you." Your support and prayers have reached out to many, many poor and struggling people. These are the people who have very little of this world's trappings but who awaken each day knowing that survival is overshadowing every movement and choice they make.

I would like to introduce you to one such family, Zau lng, his wife, Roi Tawng, and their son, Ma Naw. They are the Holy Family of today's world. They are steeped in the poverty of "not having," poverty of "health" and poverty of "acceptance" The one thing they do have is dignity and this came across very forcefully when I asked them if I could take a family photo. The wife, Roi Twang's first response was "Oh my shoes are too poor and dirty." Notice that she holds her feet up under her skirt. Then she protested and said she had to don the only presentable skirt she had. It got me thinking about how I treat the poor. I can be so busy providing things and helping them to plan for their needs but deep in the human psyche is the desire to have dignity, to come across well, to be seen to have what the other takes for granted and to be respected.

Zau lng's family is really poor. They live in a watchman's small house, minding the property of a wealthy family. The roof is still on the house, but the walls have taken a mighty battering. When I asked him if he was cold at night, Zau lng said "we have no wood to light a fire and very little clothing." Thanks to your generous help we were able to give them a bag of rice for Christmas as well as warm clothes for all three of them. This warm clothing will be a great help for the frosty nights we have presently.

Zau lng contacted the HIV virus about four years ago. He looks well, but the virus has left him totally blind and with severe diabetes. His son, sitting next to him, is mentally handicapped and never went to school. His older son, who is not in the photo, is a heroin drug user. His wife is illiterate. We, the Columban Sisters, gave them two small piglets a few months back and continually supervise Roi Tawng as to the best practice in rearing them.

Zau lng tells us often that when he was healthy he provided for his family but now he feels sad and rejected. Being HIV positive, many of his friends and extended family avoid him. Some even point the finger at him when he walks on the road. For me Zau lng is a gentle soul with a very welcoming smile. He rarely complains. He loves a visit and loves to have someone to listen to him.

Zau lng is your friend too. You have helped to lighten his burden and for this he is grateful.

Many, many thanks for your generosity, we do appreciate your care, concern and support and do know that we remember you and your families in our prayers.