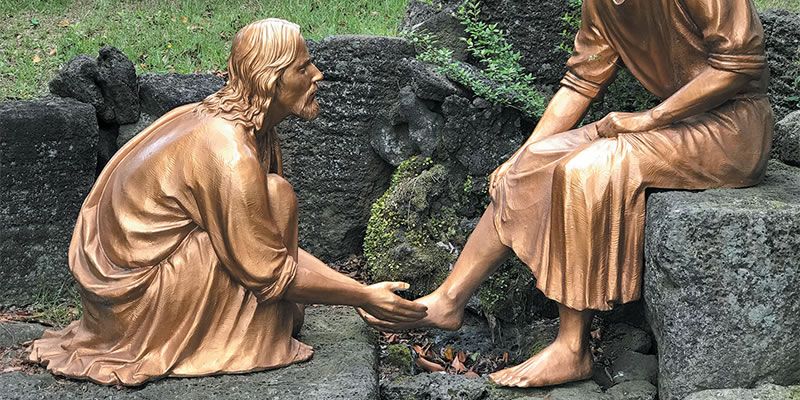 Washing of the Feet

The wrapping on the small parcel resembled a brown paper bag rather than an envelope while Fr. Elmer’s name and address were written in bold, clear letters. Perhaps it was a gift for his tenth anniversary of priesthood, which he was going to celebrate with a few parishioners that weekend. Curiously, he began to tear open the wrapping, which seemed to melt between his fingers, suddenly revealing a carefully-folded towel. He unfolded it and quickly sensed that though it was bright and clean, it was somewhat faded from having been used. He held it in the air and shook it, then examined the brown packaging, but there was nothing more. Moreover, there was no sender’s name or address.

Puzzled, he sat down and carefully examined once more the packaging and then the towel itself as his mind raced in circles trying to make sense of this gift. Was it a prank played by one of his former seminary classmates? Yes, Tom might think this funny. Or, was it a rebuke from a member of the pastoral council in his previous parish with whom he had several arguments? No, Linda was often sharp, but she was always direct. Mystified, he sat there on his low, swivel chair, thinking about this person and that person, as well as about their strange and improbable motives, while the slightly worn towel and tattered brown paper lay carelessly on his lap. 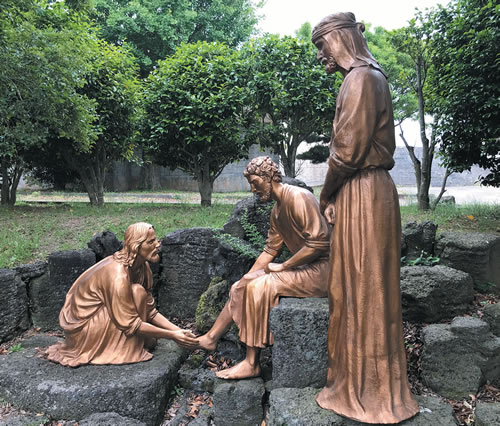 A string of weekend Masses and meetings, followed by dinner out with a few parishioners on Sunday evening, meant that he gave the matter no more thought until the following week. Then, once again, he carefully examined the torn, brown paper packaging, the handwritten name and address, and the towel itself, hoping to discover some hidden clue as to who the sender might be and what was their intent. However, the mysterious gift seemed determined to continue to conceal its meaning from him.

A few months later Fr. Elmer found himself busily preparing for the Holy Week and Easter ceremonies – clarifying the route for the Palm Sunday procession, making a list of designated parishioners for the foot-washing ceremony on Holy Thursday, and ensuring that the small group of catechumens were ready to receive baptism during the Easter Vigil.

During the Mass on Holy Thursday evening, having already washed the feet of six or seven parishioners, he was feeling less self-conscious and began to reflect not just on what he was doing but also on the deeper meaning of the ritual. The humility conveyed by being crouched on the floor at the service of another person. The cleansing and refreshment that was conveyed through pouring crystal-clear water over tired and worn feet. The affection and tenderness expressed by the gentle caress of a towel around another person’s toes. Then, suddenly, the scene of his mother bathing his own feet as a child flashed through his mind and he felt an overwhelming sense of well-being and serenity. That memory of his feet having been caressed by his mother’s hands stayed with him for the remainder of the Mass. Perhaps, he reflected, the apostles had a similar experience when Jesus washed and dried their feet. Maybe, this was the reason that Jesus insisted on washing and drying Peter’s feet: Jesus wanted Peter to experience such real and tender care, similar to a mother’s unconditional care expressed in ordinary, everyday chores for her family.

Generally, after Fr. Elmer returned to the rectory at the end of a long day, he would instinctively flick on the television and skim the channels. However, on that particular Holy Thursday evening, he sat absentmindedly in his low, swivel chair, his eyes wandering aimlessly around the living room. He still had a vague sense that he was caught up in something mysterious. It was then that he noticed the tattered brown bag and the towel still lying in the bottom shelf of the bookcase. He had forgotten about them and felt no inclination now to think about them again. Yet, they seemed to call out with a quiet insistence for his attention.

Wondering why had not done so earlier, he decided there and then to put them in the garbage can. However, as he picked up the towel and looked at it once again, he sensed something strange, yet familiar about it. Though clean and bright, the texture was slightly worn and faded, which made it a strange gift. But what was it that also made it look familiar? Why did it now seem like his personal belonging? Then it dawned on him: just a few hours earlier he had been using such a towel to lovingly dry the feet of the parishioners.

Once again, clutching the towel in both hands while seated on his low, swivel chair, the mystery suddenly revealed itself. As Fr. Elmer gazed at it, he could see himself just as clearly as if he were looking at his own image in a mirror. Like that slightly worn and faded towel, the stresses and strains of ten years of priesthood had dented some of his youthful idealism and enthusiasm for ministry, but there was still so much more that he wanted to do in the service of God’s mission. That towel was also a reminder that his priesthood was a call to be of service to others who felt worn and faded by the demands and suffering of the world.