"Immigrant of the Year" Award 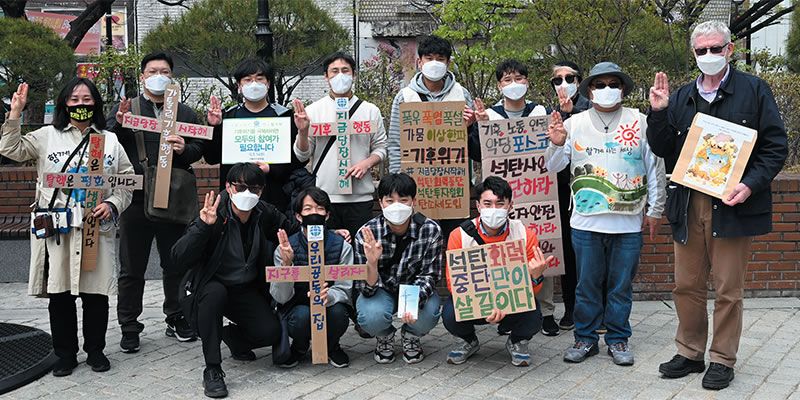 For the past fourteen years Korea has been honoring individual immigrants who have made significant contributions to the country declaring them “Immigrants of the Year.” Columban priest missionary Fr. Donal O’ Keeffe, a native of Bantry, Cork, Ireland, was the latest recipient of this honor. On May 20, 2021, “People of the World Day,” Fr. Donal was awarded a presidential citation by the Justice Minister for his over forty years of dedicated service to marginalized people in Korean society.

When Fr. Donal first heard that he had received this award, he was rather surprised, believing that there were many other immigrants that had made far greater contributions than he. When Fr. Donal first arrived in Korea in 1976, he spent his first four years familiarizing himself with the Korean language and customs as well as getting to know its people and their difficulties. When I asked him why he got involved with the workers apostolate, he said that while he was a seminarian in Dalgan he had studied liberation theology. Then at one of the meetings, organized for newly arrived missionaries, he had listened to input from a Maryknoll priest, Sister and lay person working as a team in the workers apostolate. They convinced him that the ministry to factory workers was a necessary and worthwhile one.

In 1980 he moved to Bucheon, in Gyeonggido province, and working in a team with a former justice activist and Sacred Heart Sisters they operated an “open house” where young workers could gather. There were numerous small factories in the area where teenagers that had come from the country worked. They were only given one day a month to rest. Many of these uneducated workers came to the open house where they were able to share the stories of their lives in a safe environment. They were also invited to participate in courses in self-development, critical thinking, workers’ rights and labor laws. Fr. Donal says that many of the young workers who took those educational courses later became key people in the formation of labor unions in the late 1980s.

Having spent ten years in the young workers apostolate Fr. Donal, together with fellow Columban Fr. Charles [Chuck] Lintz, became involved in Seoul Archdiocese’s Urban Poor Apostolate in 1992. Living in a shanty town in Bongcheon, Gwanack District of Seoul, they became aware of the plight of the tenants who live there. At that time the Seoul city authorities were engaged in a process they called “redevelopment.” In essence it involved large construction companies being allowed to appropriate, by fair or foul means, portions of lands on which they would build high rise apartments. To procure the land the construction companies paid as little as possible to the owners of houses in the many shanty towns that surrounded Seoul city. While the house owners were compensated the poor renters were being left on the side of the street with their few belongings. Neither the construction companies nor Seoul city authorities were willing to assist them in any way.

Frs. Donal and Charles gradually got to know people running day care centers and study rooms as well as a number of Christian church leaders in the shanty town. They began to meet and hold events in the area and they finally formed a “Residents’ Association.” Linking up with people active in other similar areas they ran educational programs to help the tenants become aware of their rights and thus enabled them to demand their rightful compensation during the redevelopment process.

During the presidential award ceremony Fr. Donal was to get another unexpected surprise. While the justice minister was congratulating all those that had received different awards he suddenly stopped and politely asked Fr. Donal to stand up and take a bow. He then revealed that he himself had actually lived as a binmin, or a poor person, in the very shanty town that Fr. Donal had helped establish a tenants’ association. In another coincidence the minister added that having qualified as a lawyer he had established a workers counseling center in Bucheon where many years earlier Fr. Donal had operated the “open house” for young factory workers.

The minister said that in the Korean language they use the phrase, “when I walk alone I can go fast, however when I walk with others then I can go further.” That may have been the cue for Fr. Donal to say in an interview with the Korea Times that “if the believers of the different faiths, who together comprise 50% of the Korean population, worked together on ecological issues they could make a huge contribution.” In the same interview he expressed his appreciation of the Missionary Society of St. Columban which sent him to Korea and supported him in all of his missionary endeavors over forty years.