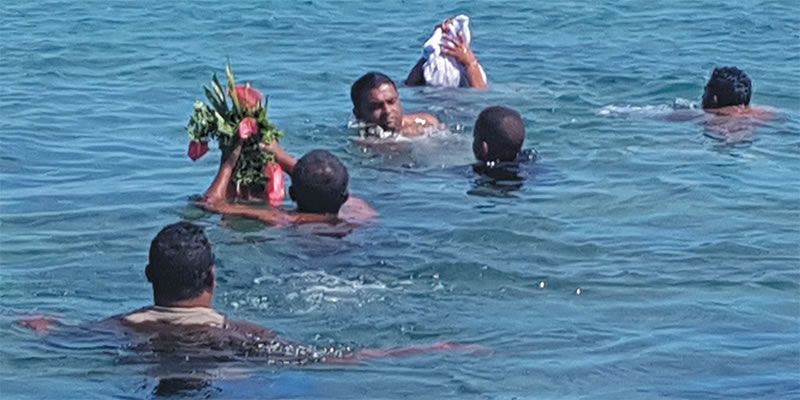 The men return Sonny Boy’s ashes to the sea.

A Celebration of Life

Steven Ram Narayan (universally known as “Sonny Boy” or “Uncle”) was born in April 1947 to Ram Garib and Marion Bennion of Elevuka, Ba, Fiji. That was both an interfaith and inter-racial marriage, not common at the time, and it was to their great credit that eleven children were all brought up as hard-working members of the Catholic parish, as well as the soccer clubs and fishing fraternities of Ba. Sonny Boy lost his wife Lila Wati two years ago, and he would regularly soothe his loneliness by going to sit in his landlocked boat for hours, dreaming of the days his health was good enough to endure the hot days and nights of long-distance fishing. Many of his children migrated overseas due to the political difficulties in Fiji and could not travel home for his funeral due to the COVID closure of the international airport.

Funerals in Fiji are always colorful, but Sonny Boy’s association with the sea made this even more special. Having led prayers at their home, we took “Uncle’s” body for cremation – a common practice for Indo-Fijians – and on the following evening, the Hindi speaking prayer group of Ba parish shared a rosary with the family live online, as government restrictions presently allow only gatherings of ten.

Two days later, the men of the extended family returned to the outdoor crematorium to gather his bones and ashes, and from there we boarded three fishing boats to carry Uncle’s remains to the place where he spent most of his time – on the sea. We followed the Ba River to its estuary with the ocean, past the intra-river island of Delailagi where the French Catholic mission to Western Fiji began in the 1880s. We passed the Catholic villages of Nawaqarua and Votua and the flotilla eventually came to rest at a favouite sandbar of his, about 30 minutes out on the open sea.

We disembarked, the men removed their shirts and clambered into the sea, holding the precious ashes of Sonny Boy, and after final prayers on the sand, they swam him out and returned him to the sea, where the ashes of ten other close family members had been scattered. The boys then joined the men for a swim and games (girls were not allowed on this trip, in Indian custom), the radio was turned out, a bottle of whiskey produced and all had a nip, with the greatest amount being poured into the sea for Uncle to enjoy.

It was an extraordinary experience for me. While I have boarded boats many times in my mission in Fiji, I had never led a cremation quite like this before. People of all races in Ba shared their grief openly, and had COVID not restricted numbers, I believe the whole town would have shut down in respect.

Funerals in Fiji are always colorful, but Sonny Boy’s association with the sea made this even more special.

A poster displayed at the house read: “To all who think of me, be happy that I’ve gone out to sea; if others wonder why I’m missing, just tell them I’ve gone fishing!”

And I will end with a poem that I used on the sandbar that I feel sums up the earthy, loving, sometimes irreverent humor of Sonny Boy:

“I pray that I may live to fish, until my dying day.
And when it comes to my last cast, I then most humbly pray:
When in the Lord’s great landing net, and peacefully asleep
That in His mercy I be judged, Big enough to keep!” 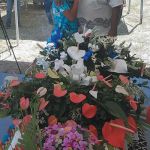 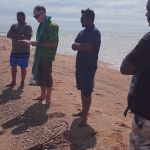 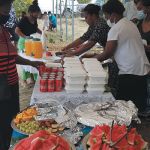 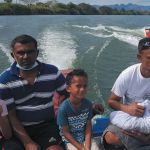 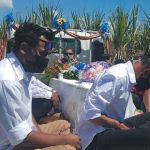