Let the Children Come Unto Me 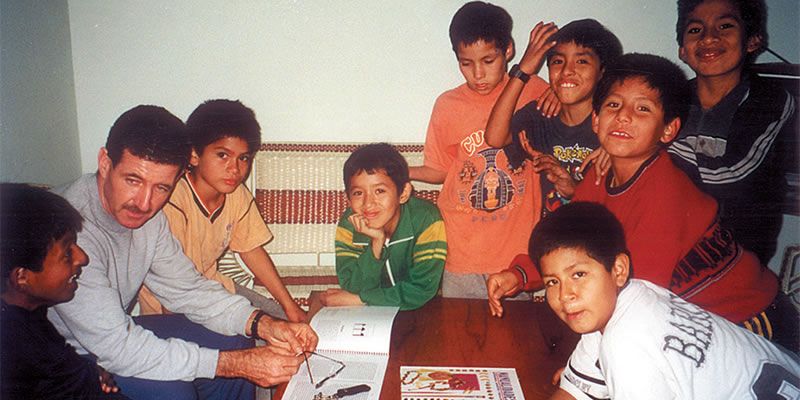 “For me, life began at 40,” laughs Fr. Tony Coney, remembering how he arrived in Lima on his fortieth birthday. In addition, the date was August 30, providentially the Feast Day of the city’s patron, St. Rose of Lima. Fr. Tony came as a man with a mission.

For years he’d dreamed of setting up a project to help needy children. He knew all about children, coming as he did from a family of seven. However, his interest in disadvantaged children sprang from his experiences as a newly-ordained priest working in his native Belfast during the early 1990’s, where the poverty and violence of the Northern Irish “Troubles” had taken its toll, especially on the young.

Tony was also inspired by the writings of pioneer Scottish educationalist A. S. Neill who, in his seminal work “Summerhill,” had advocated a whole new approach to rearing “difficult” children. “The idea was for those children to be given freedom, scope for self-expression. This really resonated with me,” Fr. Tony recalls.

In Peru he found himself in a huge parish on the northern outskirts of the capital, where shanty towns sprawled endlessly over the barren hills. Here, the children suffered from poor diet, poor housing, poor education, in short, poor everything.

Fr. Tony’s chance came in 1997. “A house became available. I bought it with my ordination money.” He made it into a day center for needy youngsters. “We started with six volunteers and about 100 children. In a few months, we had 300 children. After a year, we had to extend. Irish Aid paid for the extension.”

Fr. Tony also increased the services on offer, employing psychologists, speech therapists and social workers. The latter staffed a “defense desk” to cater for children at risk. “Nowadays we receive up to 400 kids a day, from a weekly pool of 1,200.” As to the day-to-day activities, Fr. Tony has adopted the “A. S. Neill system.” “The kids do whatever they want – arts and crafts, play, homework, reading, theater, music, dance, computers, the lot. There are no closed doors. Children get the chance to BE children, with no adults telling them what they have to do.” Instead, the children themselves come together to agree on their own norms and rules.

Fr. Tony called it, “St. Bernadette’s Children’s Center.” Why choose St. Bernadette? “After buying the house, I had no money to renovate it, so I wrote to my home parish in Belfast – St. Bernadette’s. Theirs was the first donation I ever got, so I adopted their name.”

Unfortunately, from the outset, there was a problem which perhaps vexed Fr. Tony more than any other, and that was the ugly matter of child sex abuse. It soon became clear that this was rife in the area. Worse still, the abuser was often living under the same roof as the child. “The subject was ‘taboo,’ no-one wanted to listen. Meanwhile, the kids remained in abusive situations.”

Consequently, “the idea arose that we needed a residential home, where the child could be separated from the situation and get therapy until the legal set-up in the family could be resolved.” And so it was that a SECOND center was born, “St. Bernadette’s Home,” with capacity to serve 36 youth.

“Now, attitudes HAVE changed,” explains Fr. Tony. “People are more conscious of the problem and open to doing something about it. We work with the government. It is they who refer cases to us. We still meet with resistance, from the police for instance, but that’s where our defense desk comes in. We more or less force them to act.”

Meanwhile, “St. Bernadette’s Child Protection Program” seeks to combat the threat of child abuse in the wider community. “We go into schools, do formation courses for pupils, teachers and parents, get them to set up protection teams.” Up to now they’ve gone into some 30 schools and prepared thousands of children. “In 2019 we reached EXACTLY 10,016 children”, adds Fr. Tony proudly.

But, as you address one issue, another appears. Fr. Tony’s team quickly noticed that many of the youngsters in the day center displayed learning difficulties, not necessarly because they weren’t bright, but because of the emotional difficulties they were experiencing at home. This awareness moved Fr. Tony to found a third facility, “St. Bernadette’s Remedial School.”

Here, he explains, children can, “attend for a year or so, come up to standard and go back into mainstream education, given that they’ve often been thrown out of the state system because of low grades.” Up to 120 pupils at a time reap the benefits of this initiative.

Taking stock after over 25 years, Fr. Tony’s dream has realized itself in the form of three centers, 65 paid staff members and a child protection outreach program, almost all financed by overseas donors (many of whom are “Columban Mission” readers). He says that the priority now is, “to sustain all this. The goal is to make it permanent. We’ve achieved a lot, but have way to go yet!”

Fr. Tony’s life may have begun at 40, but a great many people in Lima are hoping it’ll go on for a long time to come.

Columban Fr. John Boles wrote this article, and Columban seminarian Atonio Saulo Seeto povided the photos. They both live and work in Peru.

In Her Own Words

For many years, Christina has been connected with St. Bernadette’s Day Center. This is what she told us.

“When I started school I went every day to the library in the Center, where the staff helped me with my homework. They were very patient, and I was able to go on learning. In the workshops I learned how to make bracelets, necklaces, key rings and many other things. At home, though, often I felt very lonely and sad because my parents separated, and my Mum had to go out to work. Even now at times I feel sad because I have several brothers and sisters, and I have to look after the smaller ones, and feel as if I’m the mother who has to do everything. It’s because of this that in the Children’s Center I can forget all my sadness and problems.”