A Man of Peace 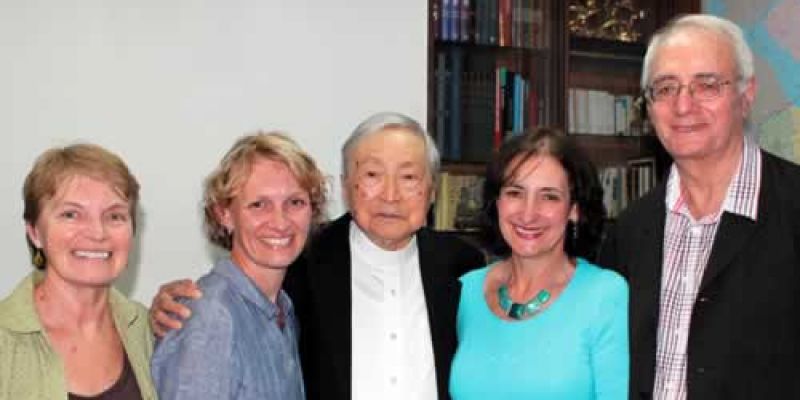 I met Bishop Jin about 25 years ago on my first visit to China and dined with him in his former residence next to the Cathedral. This was before I actually came to live in China. I had been introduced to him by Fr. Edward Kelly who had collaborated a good deal with Bishop Jin on such projects as sending Chinese people overseas for study. My recollection of that occasion was that the place where the Bishop resided, in the building near the altar end of the Cathedral, was rather dimly lit. I recall two things in the modest room where I met the Bishop: a brand new fax machine and a spittoon under the seat. He hosted a meal of many courses in his spartan surroundings that were brought in by an elderly man. The welcome was warm and hospitable, but the building was rather dark and shabby.

After that initial encounter I met the Bishop on occasions overseas such as in the Columban Seminary in Australia and at the Columban House at Navan in Ireland. He was welcome to stay in both those places at a time when he was not universally welcome even in houses of his own Jesuit Society. At the time he was not yet Vatican approved, and in any case, Bishops are only nominally a part of their former congregations.

In Shanghai I met the Bishop many times during my 16 years in the city. I witnessed his child-like excitement in the company of Jesuits and on one occasion remember him with enthusiasm donning a sweatshirt given him with the name of Boston College written all over it. He was very happy to be reconnected universally more favorably with the Society of Jesus as a whole, after his approval by the Vatican as a Bishop in the Diocese of Shanghai.

I saw the Bishop in various situations and always admired his good nature, tact, and diplomacy. He had a wonderful memory and was ever grateful for even small kindnesses. His linguistic abilities were very considerable, and he was an intelligent and shrewd man.

The Bishop was abreast of what was happening in the world of theology. He read magazines in various languages such as The Tablet from the United Kingdom, Der Spiegel from Germany, and his office was lined with weighty tomes in various languages. An example of his being abreast of current theology was his appreciation of the need for inculturation in the Church and a case in point was the new stained-glass windows in the Cathedral. For the Bishop there was no problem with experimenting with new forms that expressed the Gospel stories through art-work that mimicked the paper-cut Chinese style. Many others, clergy and lay, were reactionary to anything that departed from the classical European expressions of art.

In 2006, the You Dao Foundation, of which I was at the time the founding chairman, had a memorandum of understanding with Bishop Jin for a project in Nan Qiao, Fengxian. There was an old building that had been returned to the diocese and was available for restoration. We agreed to renovate the place to accommodate migrant women from neighboring provinces looking for work in the more prosperous Shanghai. The diocesan religious Sisters were to be in charge of running the project. Funding to prepare the building was to be split 50-50. The restoration work was done, and everything was ready for operation but for various reasons we could never go ahead with the project. In fact I was quite uncertain as to what the stumbling-block was, but I have reason to believe it was internal politics in the Church. It was clear to me that Bishop Jin could not always get his own way, and even when he thought the way was clear it didn’t seem to be.

In 2007 Bishop Jin gave me a signed copy of the first volume of his memoirs in Chinese. I was happy to see this come to light as years before I had encouraged him to write the story when he asked my opinion about the idea. In fact many people were encouraging him to do this. I told him if he didn’t write the story others would write it for him and his particular point of view might be written out of it. Late in 2012 he gave me the English version of that volume which was nicely translated by William Hanbury-Tenison. I congratulated him and noted that it was such a long time since he came out with his first Chinese version! I said that I now eagerly awaited the remaining volume that would bring us up to the present. He admitted that this was really the sensitive part of the work. I knew he was well into writing this more recent history and told him that it would be a challenge to speak truthfully about events in those times in order that future generations might have his unique personal view of what has been happening on the China scene. This volume was never completed, and perhaps had the Bishop been told about his cancer it may have given some urgency to the work. But this volume dealing with more recent times held the more sensitive material and he it seems baulked himself on completing it.

When I was 65 the Bishop was 95. He was just a year younger than my father who also lived into his 90s. There were other reference points for me too such as the fact that Bishop Jin had gone to my Roman Alma Mater, the Gregorian University, about the time I was born.

Bishop Jin has always been most gracious to me personally and to the Society of St. Columban. I last chatted with him when my two sisters and a niece came in late October 2012. He was in good form that day and always knew how to say the gracious word. Memorable photos were taken.

He would remember my birthdays, Christmas and Easter and send me a gift. Indeed when I turned 60 years old here in Shanghai, he invited me and a friend out to dine. Fr. Tommy Yu from Wuhan happened to be in town on that occasion and came along.

“Dear Bishop Jin,
Warm best wishes for you this cold Christmas. I hope that you are able to keep warm. At the least our hearts are warmed with the knowledge that Jesus is at work in our world and is the Lord of History.

I do hope and pray that God will bless you and give you courage and strength this Christmas and New Year. You have many challenges at an age when most people are certainly beyond worrying about the issues of governance.

I intend to go down to Australia for several weeks from the middle of January. It will be just after Chinese New Year when I return. You give me hope that I can continue in China for a few years yet. God knows the future! Thank you for the gift that you sent me in the past couple of days. I am most grateful for your kindly thinking of me.

My best wishes for you for the coming months. May God give you good health, steady judgment, wisdom and a sense of humor.”

He died in the first half of 2013 after a lengthy stay in the Rui Jin Hospital where access was generally denied him even to his close Chinese friends. I could not help feeling that he was trapped in a gilded cage.

l miss his presence and thank him for his influence on my own life and for the beneficial relationship that he has had over the years with my own missionary society. May God grant him peace.

After many years in China, Columban Fr. Warren Kinne now lives in Australia.