Many Mountains to Climb 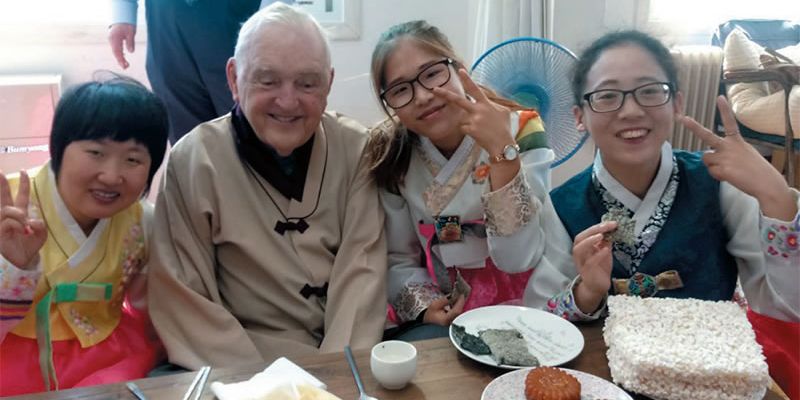 The Journey to Independent Living

I took the call and an excited voice came over the phone. “Sinbunim, (Father) I have passed the college entrance exam.” It was 22-year-old Kim Youn Cheong on the phone. I think I was even more excited than she when I tried to convey to her how delighted I was on hearing the good news.

Youn Cheong has no memory of her mother or father. She was abandoned as a baby and placed in an orphanage. The only memory she has of the orphanage is that it was bitter cold in the winter. She remembers sleeping on the floor with no central heating with only the bodily heat from the other twenty-nine children in the dormitory giving some warmth. The summer months were not much better as there were no air conditioning or electric fans available to fight off the 90F heat. The heat meant opening the windows which resulted in the onslaught of mosquito bites.

At the age of six Youn Cheong was transferred to another orphanage in Gwangju city. This building had central heating and also air conditioning during the summer months. However it had its own demons, not material demons but human demons. For some unknown reason the ten member staff seemed to be of one mind, make life hell for the residents. Youn Cheong said ”We did not have any new clothes. The clothes were always hand-me-downs from the older residents. A hairdresser came in once a week and you did not dare tell her how you wanted your hair cut. All without exception were cut short. You had little or no privacy. If you stepped out of line you were punished by a beating on the shins with a rod or deprived of a meal or even deprived of your sleep. Yes, it was hell on earth.”

It is not certain who it was, a member of the staff or one of the visiting volunteers, who blew the whistle to the press, resulting in a thorough investigation. Almost all the staff got prison sentences or were dismissed. Fortunately they were replaced by a more humane and a more caring staff. At this stage Youn Cheong was attending high school. Since she was approaching her eighteenth birthday her future in the orphanage was being discussed. According to the regulations after the age of eighteen she could no longer be a resident in the orphanage.

Since Youn Cheong was registered as a person with “special needs” the authorities at the orphanage contacted the Emmaus Group Homes. Youn Cheong joined three other young women in one of the sixteen group homes run by Emmaus. Rhee Gemma, the assistant in the home, was a very caring and loving person. While the other three residents attended Emmaus Industries during the day, Youn Cheong continued her schooling.

There was great excitement and celebrations on her graduation day with plenty of photos and flowers. In the warmth and family like atmosphere Youn Cheong experienced the motherly love of Rhee Gemma and really began to blossom and began to believe in herself. Whenever there were group home functions Youn Cheung would act as the Master of Ceremonies and perform her task with much gusto, and full of self-confidence. It came as no surprise to Gemma the group home assistant when Youn Cheong confided with her and said she would like to go to college, ”I would like to climb another mountain,” was the way she put it. Gemma, after consulting with others, decided that it would be good for Youn Cheong to spend a year at one of the learning institutes to prepare for the college exam.

She enrolled for night classes at one of the local learning institutes and in the meantime was fortunate to get a part time job in a high school where she worked in the headmaster’s office serving refreshments to visitors and to the headmaster.

Two years ago, Youn Cheong was accepted at a nearby college and began a two-year course of night classes in social work. She continued with her part time job at the high school and earned her own pocket money and was able to buy her own books. Because of her circumstances, the college authorities generously exempted her from paying college fees.

It was also providential that she became very friendly with a fellow college student who lived in the apartments next door. This student used invite Youn Cheong to her home where she would be welcomed by her friends, parents and siblings. This also helped her grow in self-esteem. The few times I saw both of them walk side by side, carrying their satchel of books, as they headed for the college, were joyful sights.

Due to the restrictions brought on by COVID19, there were no special college graduation celebrations. The President of the College presented the graduation certificate to each individual privately. Others were waiting outside rushing to express our chukhahamnida (congratulations).

For me, it was a moment to be cherished forever. As I posed with Youn Cheong for a photo, I turned to her and asked “What is the next mountain you would like to climb?” With a big smile on her face she looked at me and said ”independent living.”

Columban Fr. Noel O’Neill lives and works in Korea where he founded Emmaus Industries and Emmaus Group homes to serve those with special needs.