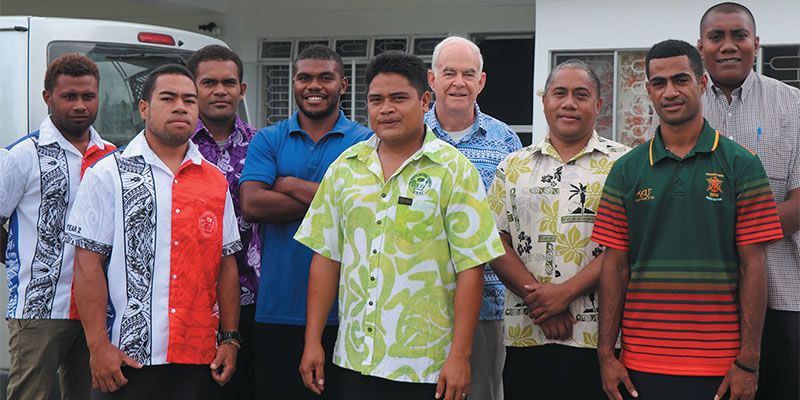 Thirteen young Columban priests arrived in a hot, humid and hurricane-ravaged Suva, the capital of Fiji, more than 70 years ago on February 22, 1952. They were given a very impressive and traditional Fijian welcome. A few days later they were packed on a bus and sent on the six-hour journey to a town called Ba to begin learning the local languages. Fr. Martin Dobey remembered the enthusiasm. “We had a great journey. We sang on the bus all the way around…I myself got bus sickness. To make things worse my hat flew off, and I had to stop the bus to go back and collect it.” 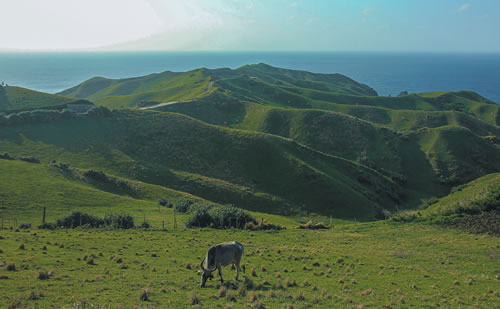 Foreign languages are a mine field. Fr. Dermot Hurley, the pastor Ba Parish, had to organize a Mass for the coronation of Queen Elizabeth in the middle of 1953. He chose Fr. P.J. Kelly, who was considered the expert, to say the Mass in Fijian. Fr. Dermot recalled, “He did a very good job. But when it came to the last words of his sermon they went something like this: ‘So then let us rejoice and be happy on this wonderful day, this glorious and joyful day, the day of the burial of our queen.’ The word for coronation in Fijian is ‘veibuli’ but P.J. said ‘veibulu’ which is Fijian for burial. The old catechist Valerio had a big laugh when he recounted the story to me…”

The cow got out one day and Fr Paddy demanded, in English, from a little girl to know who was responsible. The little girl said “Ko yau, saka” (it was I, Sir). “Then you tell Ko yau that I want to see him,” replied Paddy.

Language learning was particularly difficult for older missionaries who arrived later. Fr. Paddy Laffan, a former missionary to China who arrived in Fiji in 1960 at the age of 62 years, was in the Yasawa Islands trying to learn Fijian in 1961. He found it difficult there without milk, so he bought a cow and kept it in a fenced enclosure. The cow got out one day and Fr. Paddy demanded, in English, from a little girl to know who was responsible. The little girl said “Ko yau, saka” (it was I, Sir). “Then you tell Ko yau that I want to see him,” replied Paddy.

Figuring out and adapting to a new culture was important too. Fr. John Doyle was appointed parish priest of a rural Fijian parish even though he had been studying the Hindi, not Fijian, language. “Nobody wanted to see the two assistant priests who had spent six months learning Fijian; they wanted to see the boss. For me it was a blessing in a way. Very early on, an old man came up to me and spoke for half an hour. I asked Fr. J.J. O’Loughlin, who was listening, what he had said and J.J. told me in one sentence. “But that man has been talking for half an hour,” I said. “Yes, but he had to get himself settled,” answered Fr. J.J. Apparently, he had prepared his approach very carefully. His request only came in the last sentence. That was a great lesson in Fijian culture for me. If, when a Fijian man walks in the door, you ask him before he even sits down what he wants, you kill him dead. He has worked out in his mind how he is going to approach this problem so as to make the request as painless, diplomatic and gracious as possible. Fijians can teach us lessons in graciousness and tact, especially in their Fijian ceremonies and in their requests.

Fr. John later organized his parishioners to build a school dormitory. “We would load the timber on a truck once we reached the road. The Indian driver would sometimes complain about the weight of the timber being loaded on the truck. Then you would hear some smarty-pants say, Me moku o Mitau [Let’s beat up the driver]. The driver would be sufficiently intimidated then to proceed. Going up the hill to our location the truck would rear up with the excess weight of the long planks. Three or four youths would sit on the bonnet (front hood) of the truck to keep the front wheels on the ground. It was dangerous.” This was another aspect of Fijian culture.

Missionary experience keeps you humble. It is also a great teacher. St. Columban, missionary to Europe almost 1400 years ago and patron of the Missionary Society of St Columban said, “A life unlike your own can be your teacher.”

Like most Columban missionaries in Fiji, Fr. Vince McCarthy came from an individualist culture with a democratic and egalitarian outlook. A Fijian man came to speak to him one day while he was sitting on a chair on the veranda of Nabala presbytery. Fr. Vince offered him another chair but, in normal Fijian style, the visitor sat on the floor. Fr. Vince repeatedly asked him to sit opposite him on the chair but to no effect. Finally he went over to his visitor and physically lifted him into the chair! When telling the story later, Fr. Vince winced as he said, “I could have satisfied my American democratic instincts by just sitting on the floor myself!”

One source of frustration for the Columbans in the early years was the Bishop as Fr. Martin Dobey recalled. “He issued a lot of petty edicts about our daily lives. You couldn’t leave your parish without his permission or spend one night outside your parish without his permission. One day he was sitting in the little sitting room in Lautoka parish in bad form when Fr. Arthur Tierney (from a parish miles away) comes roaring into the yard on his motorbike and stops within a half-inch of the step of the back door. He gets off with great flair. Bishop Foley looks up at him coldly and says, “Father, what are you doing out of your parish today?” “Oh, I’ve just come down for confession, my Lord.” Bishop Foley was completely nonplussed. He couldn’t reply. It might or might not be true. So he went into his room and sulked for four hours.

Fr. Arthur and the Bishop had a further run-in at another time. “He [the Bishop] received complaints about Fr. Arthur being downtown in Suva city all the time and not in his parish of Samabula. So he issued orders to Fr. Arthur not to go into Suva without his permission. Half an hour later the Bishop gets a call from Fr. Arthur for permission to get groceries from Morris Hedstron. Half an hour after that, he received a call for permission to buy some vegetables from the market. Fr. Arthur made five or six of these calls and Bishop Foley at last said, ‘Go to hell!’ which was the end of that edict.”

Missionary experience keeps you humble. It is also a great teacher. St. Columban, missionary to Europe almost 1400 years ago and patron of the Missionary Society of St Columban said, “A life unlike your own can be your teacher.” If the challenges and frustrations sometimes weigh you down the joys, surprises and fun compensate for them.