Next Year Is Now 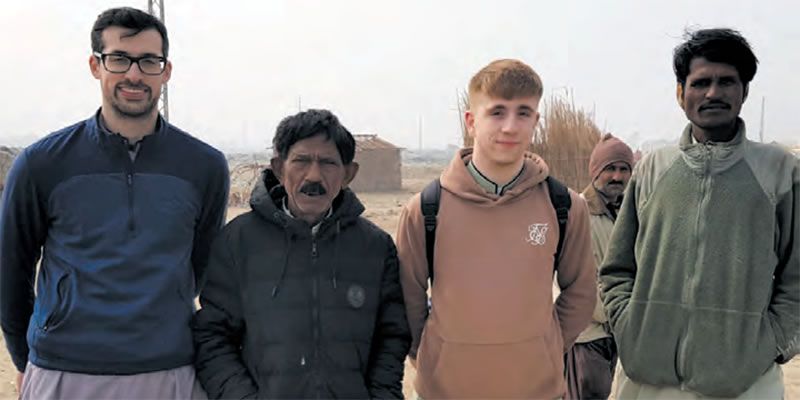 A Visit to Pakistan

Part of life while growing up was the occasional phone call I would receive from my uncle, Columban Fr. Tomás King, who is a missionary priest in Pakistan. Every conversation I had with him over the phone would include the question, “When are you coming to Pakistan, Dáire?” While I knew he was usually joking, it still made the phone call a little awkward as I was unable to tell him I had never planned on going to Pakistan to see him. I would always answer with, “Maybe next year.” I didn’t think I would ever go to Pakistan and never imagined myself wanting to go there. That was until my brother, Cathal, decided to call his bluff and visit Pakistan during his transition year.

Cathal is two years older than me and two years ahead of me in school. He did the unthinkable as far as many people were concerned and visited our uncle in Pakistan. I think he was extremely courageous to go to this country along with our aunt, Mary. Tomás did have visitors from Ireland before, including his sisters and brother, but Cathal was the first of our generation in the family to visit. With him being the third youngest in the King family and my older brother, he really set an example for me and made me realize that when you have the opportunity you should take chances and be adventurous in life.

From what mainstream media has told us, we should not risk going to countries like Pakistan, but Cathal went against this and experienced it for himself and definitely debunked that myth. Following in his footsteps and after hearing how much Cathal enjoyed it, I decided, along with my cousin Eoin, to go to Pakistan during my transition year. I had to see for myself what uncle Tomás has been experiencing for the last 27 years.

My first day in Pakistan was somewhat overwhelming. I couldn’t believe that I was actually in Pakistan with my cousin and uncle and not back in Ireland with them during one of uncle Tomás’s occasional visits home. One thing I noticed in Karachi, where we stayed for the first two days, was the smog. When we were in the streets of the city, distant buildings were not visible, and I could smell the accumulation of fumes and smoke. This was my first experience of smog, and I got a real sense of how air pollution affects the environment for the first time.

After doing some traveling around the city, I began to realize why there is so much smog. Over the two days in Karachi, I saw only a few bicycles, and it seemed to me that their motorcycles are like our bicycles. In every street we traveled, there were motorbikes carrying up to five people. In some cases, the motorbike is the family vehicle. The traffic was congested in the city, and it’s no wonder that the air is so polluted with all the fumes being emitted from the many motor vehicles.

In uncle Tomás’s parish there was a rubbish dump that we visited, and this dump was a shocking sight to say the least. There was every kind of rubbish to be seen in large heaps that caused foul smells. We saw families working on the dump, sorting and even burning rubbish. Young children working to help their fathers earn less than a living. This dump showed me that while the government does not provide proper services to deal with all the rubbish that is produced and how to recycle it, some poor people collect the rubbish and sell what is reusable to eke out a precarious living for themselves. Seeing these children work in these conditions while others their age attend school in other countries really put things into perspective for me.

Following my uncle around the southern part of Pakistan I got to see him deal with many different people in difficult situations. He is always trying to help those who are in need and seeing him work so selflessly really inspired me to think about my own actions. His constant efforts to help people obtain basic needs like education made me realize how much we, people from developed countries, take for granted.

Thinking about my life in Ireland and seeing the Pakistani people struggle through each day really put my wealth into perspective, and I am not talking only about money. I really am blessed to be living in a place where education is free for everyone, there is no shortage of water, opportunities are endless, and dreams can be fulfilled with determination and hard work. What I used to call “hard work” would be a walk in the park for most of the people I met in Pakistan, who work tirelessly for their landlords just to be able to feed their families each day.

My visit to Pakistan was an eyeopener with the poverty that I witnessed first-hand. One thing that stood out to me was the generosity and kindness of the people no matter how bad their situation. We went to two remote villages where people lived in mud huts, and one of their biggest concerns at that time was to ensure we enjoyed our visit. They offered us a lovely dinner, and I don’t think I had ever appreciated where the food came from as much as I did then. It felt like so much more than a dinner; it was a gift.

We also visited a parish where uncle Tomás used to be based, where he and the Columban missionaries helped people break free from bonded labor by providing land to build houses on. When we visited the area, we saw that many houses were demolished illegally by the government officials who claimed falsely the land was being encroached upon.

While we observed the wreckage, a lady invited us over for tea as she boiled water on the ground near a tent where her house used to be. Her family found chairs for us to sit down beside their tent. As uncle Tomás talked to these people, it was very upsetting to see what they had to go through, and yet they wanted us to feel welcome, and they seemed to put us before themselves.

I have never felt as welcome in another country as I did in Pakistan, and I will definitely visit uncle Tomás out there in the future. Seeing how hard the people’s lives are, I can understand why uncle Tomás devotes so much of his time to helping them. I am proud to call him my uncle.