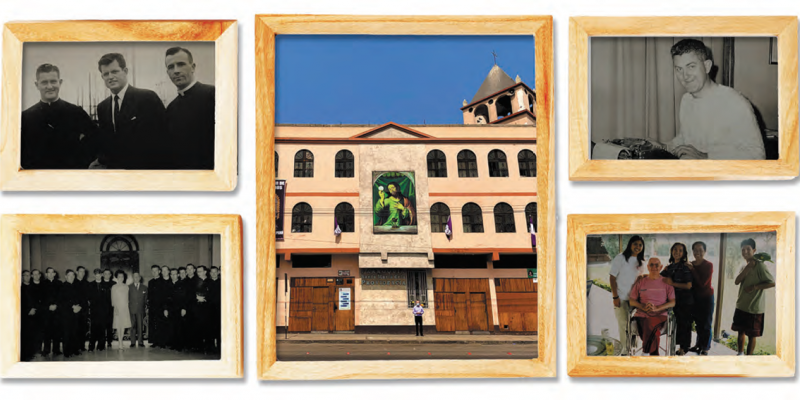 Helping Those in Need

This was the scene when the first three intrepid Columbans arrived from Ireland in 1952 to start our mission in Lima. The words are those of one of this gallant band, an extraordinary individual by the name of Fr. Michael Fitzgerald, universally known as “Fitz.”

They’d been invited by the bishops of Peru to evangelize a swathe of territory on the edge of the capital, an immense expanse of desert and farmland containing one barrio (neighborhood) and 15 haciendas (neo-feudal estates). The resident population was estimated to be about 40,000, which was swollen by some 20,000 seasonal workers at harvest time with cotton being the main cash crop. The area was designated as “The Parish of Blessed Martin de Porres,” in honor of one of Lima’s most beloved sons. It only became “SAINT Martin” in 1962 when the man was canonized.

Today, scarcely 70 years later, this same area forms the bulk of the Diocese of North Lima, which teems with 2.7 million inhabitants and contains 47 parish churches. Around half of these have been established by the Columbans, and many of them built by the incredible Fr. Fitz.

Fr.Fitz continued to live in Lima right up to his death half a century later, and is fondly remembered as a man of astonishing energy. His specialty was to secure assistance, not only in finding land and building churches, but also in aiding the thousands of poor people that made up most of the Columban parishes. To do this, he realized early on the value of making contacts. As Fr. Dermot Carthy (who knew Fr. Fitz for over 45 years) recalls, he was an expert at getting help, “He was ‘Mr. Fix-it’ for the whole area.”

Eventually having found accommodation and set up a temporary church in the built-up area of this first parish, Fr. Fitz went out “on the road,” ministering to the rural populations dispersed around the haciendas. It was here that he had his first opportunity to make contacts. Several of the estate owners contributed funds towards the purchase of a pair of cars for the parish. It was an encouraging if modest beginning, but any hopes of taking a “slow but sure” approach to expanding the mission were soon dramatically overtaken by events.

Around this time, a process of mass migration of people from the countryside to the city had begun, with peasant farmers crowding into Lima in search of a better life. The government did little in the way of house-building, so the people started to take matters into their own hands by organizing huge land invasions around the urban periphery. Many of these invasions occurred on Fr. Fitz’s doorstep. The records carry this quote from him, describing an event in the late 1950s:

“Literally overnight there was an invasion of I don’t know how many families, maybe about ten thousand. I climbed a little hill to see where the night before there had just been a dry river bed, nothing, apart from rocks and bushes. Now, the morning after, it felt like a scene from ‘Exodus’ in the Bible, all these people and their wicker-work shelters.”

This turned out to be merely the first of a wave of land invasions that continued over the ensuing decades. The Columbans needed to react fast. Not only did they have to obtain land and build churches in double-quick time, but also they had to try and provide social assistance to these people. In particular, there was an urgent need for the squatters to legalize their plots and so be protected from eviction. This is where Fr. Fitz’s gift for contact-making came into its own.

Among the “high society” people he’d been introduced to was a lady called Clorinda Málaga. In 1958, as fortune would have it, Clorinda married a gentleman by the name of Manuel Prado, the man who just happened to be President of Peru! Suddenly, Fr. Fitz’s friend was the nation’s First Lady, with special responsibility for social welfare.

Clorinda was only too happy to support the social service initiatives of Fr. Fitz and his Columban colleagues, and to put in a good word with potential private benefactors. Even better, she smoothed the path to the President himself. Fr. Dermot recalls how Fr. Fitz ended up with almost free access to the presidential palace: “He could get in at any time. Just used to walk in through the back door.”

Fitz used this influence to try and solve the issue of legal title for the squatters’ plots in the land invasions. Thanks to his intervention, huge numbers of families secured right of tenure. Where the areas in question were barren they could be declared “State property,” and so Fr. Fitz persuaded the government that in these cases titles should be given out for free.

Even where private property was involved, the problem wasn’t insurmountable. Once, Fr. Fitz reported in the archives, he met with the President and the Prime Minister.

“The Prime Minister said there’d been a fund set up using contributions from businesses to finance housing schemes, and it hadn’t been touched. The President said, ‘Alright, why don’t we just use that money?’ So, it was decided to use the fund to buy titles from the landowners.”

Of course, such a paternalistic approach was no substitute for true social justice, and Fr. Fitz always supported calls for comprehensive land reform. Meanwhile, however, his motto was, “never look a gift horse in the mouth,” especially when there were so many people in need.

Not that he limited his contacts to Peru. In 1961 he scored a publicity coup by getting the visiting Senator Edward “Ted” Kennedy (brother to the then-President of the United States, John F. Kennedy) to stop by the Columban parishes in Lima. It is doubtful whether Ted brought any cash along with him, but the resulting “photo op” provided a great boost to Columban mission promotion.

The following year, Fr. Fitz made the most of the Irish-American connection once more, this time in relation to Cardinal Cushing of Boston (one of the world’s wealthiest dioceses). Fr. Fitz was in the process of building a new parish complex, “La Virgen Dolorosa.” His words in the archives continue the story.

“I was doing ‘la Dolorosa’ when Cardinal Cushing came on a visit to Peru. As he was from an Irish background, he offered to help with the new church. He gave me $10,000 CM(which was big money in those days) to pay for the roof.” Cushing even stayed on to perform the opening ceremony.

And so it continued, year after year. As the city grew, so did the number of Columban parishes, and so did Fr. Fitz’s land-acquiring/church building/social welfare providing exploits in Condevilla, Palmeras, Naranjal, Mesa Redonda, Covida, Villa Sol, Huandoy. The list goes on.

Fr. Fitz served as Columban Superior in Peru from 1984 to 1988. His final role was that of Vicar General (“Bishop’s right-hand man”) in the new Diocese of North Lima when it was set up in 1996. He died peacefully in the Columban Center House in Lima on December 21, 2006.

In his first letter to the Corinthians, St. Paul remarks that, for the Church to flourish, you need the apostle, the prophet, the teacher, the healer, the helper, and more. It seems that he also might have added, the “fix-it!”