In the Shadow of the Peaky Blinders Gang 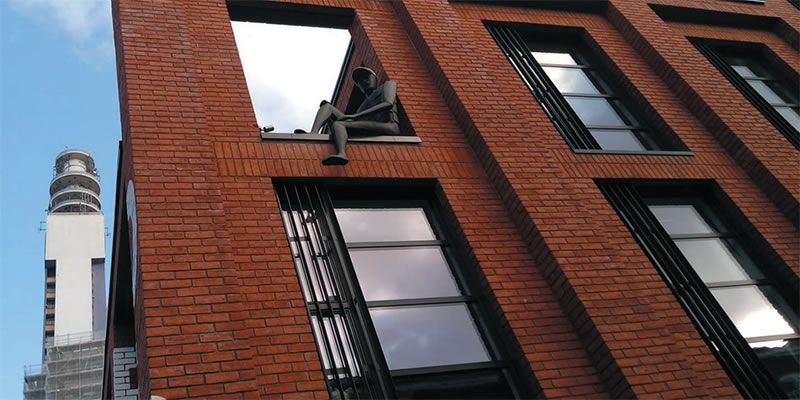 Preventing a Repeat of History

Columban lay missionary Mauricio Silva stands in the shadow of a giant mural featuring Cillian Murphy, star of the television show “Peaky Blinders” which has captivated audiences worldwide for the last few years. The series charts the rise of a gang from the level of petty criminals to that of international gangsters at the end of the nineteenth century. The program is based on fact, but what many people don’t know is that the Peaky Blinders grew out of racial tensions between English Protestants and Irish Catholics in the back streets of Birmingham, England.

Birmingham in the mid-1800s was a booming center of the Industrial Revolution. The city’s success brought great wealth to the factory owners but left many of the workers in abject poverty. The situation was further complicated by a massive influx of people from Ireland, forced to leave their native land by famine and disease. The English workers often resented these migrants. They feared they’d take their jobs or, at the very least, drive down wages. Even worse, the newcomers were Catholic!

Rabble-rousers capitalized on these tensions, and the 1850s and 1860s saw race riots erupting in several cities, with English Protestant mobs attacking Catholic Irish ghettos. In Birmingham, the Irish responded by forming self-defense groups. As the violence subsided, some of these groups turned to crime. One of them became known as the Peaky Blinders.

The unusual name comes from two sources. “Peaky” refers to the peaked caps the gang members wore, often at jaunty angles. They also tended to dress in an ostentatious manner, taking care to be well-groomed and sporting brightly colored scarves. In local slang, anyone or anything that catches the eye like this is called “a blinder,” hence, “Peaky Blinders.”

Today, inter-Christian rivalry in England is thankfully a thing of the past. The Irish have long since been integrated into wider society and have largely moved out from the city centers to the suburbs. But history is threatening to repeat itself as a new wave of immigration takes place, this time involving not Irish Catholics but Asian Muslims.

This is where Mauricio and the Columban missionaries come in.

Mauricio Silva and wife Nathalie are from Chile. They arrived in Britain as Columban lay missionaries in 2001, just as racial tensions were boiling over in precisely the same areas where Catholics and Protestants had clashed some 150 years earlier. There had been serious urban rioting in 1981 and would be again in 2011. The Columban missionaries have long seen inter-religious and inter-racial dialogue as part of our mission, and so invited Mauricio and Nathalie to settle in a predominantly Muslim district of Birmingham and devote themselves to bringing together people of different races and religions.

“We are doing the work of easing tensions,” explains Mauricio. “This happens when there is no interaction. People don’t know one another and so don’t understand one another. They get suspicious. Misunderstandings happen. We overcome this by getting to know our neighbors. By getting to know Muslims! Immigration must be followed by integration.”

Over the years Mauricio has built up an impressive portfolio. He belongs to a host of projects, initiatives and committees, all aimed at fostering racial and religious harmony. They include “Restore” (where people befriend asylum seekers and train others to do the same), the Birmingham Faith Encounter Program, the Birmingham Churches Together group, the Diocesan Inter-Religious Dialogue Committee…the list goes on.

He is convinced that as racial integration grows, so crime and other social problems decline. In the end, everyone has the same aspirations. “We all need healthcare, security, education.” He is sure that God is in this work, and that we’ll all profit from its success.

Mauricio is encouraged by recalling how the Peaky Blinders’ story finally ended. As the nineteenth century drew to a close the violent turf wars between the “Peakies” and rival street gangs reached a crescendo. As far as the authorities were concerned, the final straw occurred in 1897 when a particularly brutal confrontation cost the life of Police Constable George Snipe. Two years later the Birmingham city fathers appointed top lawman Charles Haughton Rafter as Chief Constable. He patiently built up an honest and efficient police force which gradually won the trust of Catholics and Protestants alike. Gangs like the Peaky Blinders were methodically broken up. Ringleaders were arrested or fled to join crime syndicates in other cities.

By the time of Constable Rafter’s death in 1935, Birmingham was reputedly the safest large city in Britain. His funeral attracted one of the largest public gatherings in the town’s history.

And Rafter had been an Irishman and a Catholic!

Columban Fr. John Boles is the regional director of the Columbans in Britain. Mauricio Silva is from Chile. He and his wife Nathalie came to Britain as Columban Lay Missionaries in 2001. They live in Birmingham with their two children. Mauricio now serves our mission as a Columban coworker.