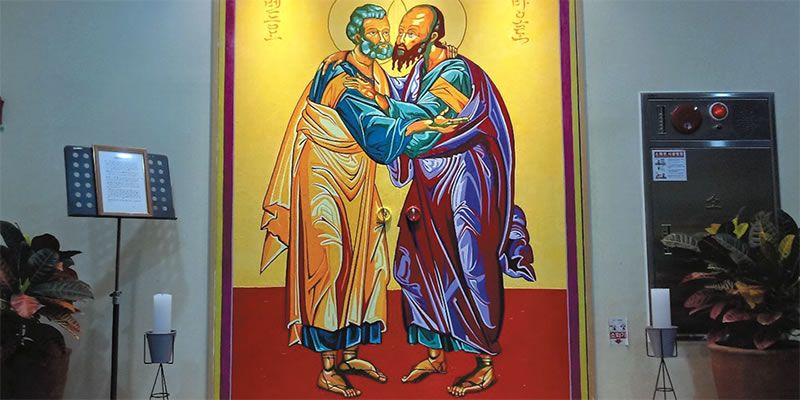 Speaking About the Mural

I am generally not so enthusiastic about explaining my artworks. I would rather have the artwork speak for itself to those gazing on it, because I feel that words are not enough and, even if they were, they are limited. In this article, however, I’d like to talk about the process, my intended symbolism and my short reflection on the mural that I painted on the entrance door of the Martyrs Chapel of the Columban Formation House and Lay Mission Center in Seoul, Korea. The painting is entitled “St. Peter and St. Paul’s Embrace of Peace.” 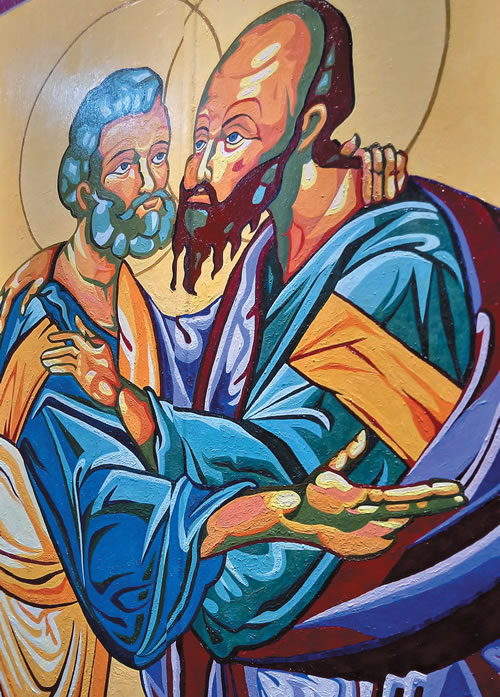 The idea of a “painting” on the door of a chapel was initiated and requested by the Columban Formation House. The goal was to transform the door’s bare look so that it is distinguished as a chapel door. The request was a big challenge to me in many ways: the door size and its metal surface, the subject, type of materials to use and my readiness do this kind of artwork.

Honestly, I felt overwhelmed when it was requested; however, I took it as a challenge for Art Ministry. My confidence lies in the strong belief that God has put this talent in me to serve others and although I felt inadequate, I trusted God would guide me.

The first task was to decide the subject, which was tough since I had to choose one instead of receiving any instruction. However, the moment I saw the double-door entrance of the chapel, I immediately thought of two human figures, since most of my works are portraitures. If I were to paint human figures, the next question then was “Who should these figures be?” After getting suggestions from fellow Columbans, one encouraged me to follow my heart, always good advice.

As a result, I have chosen Saints Peter and Paul. On the surface level, the two of them seemed unlikely choices for a Columban house. Usually, the saints I often encounter in many of the Society’s places are those of St. Patrick, St. Isidore, Mary and, not forgetting, St. Columban. The Society founders, Bishop Edward Galvin and Father John Blowick, came to mind as well. Ultimately, my choice was St. Peter and St. Paul.

Therre was a personal connection to this choice as well. The feast of St. Peter and St. Paul is June 29, the same day of my diaconate ordination in 2014. And I found deeper meaning, relevance and significance upon realizing that it also the same feast day in 1918, when the Society was canonically recognized as a missionary society by Bishop O’Dea of Galway, Ireland. The decision to choose these two apostles led to more research, which opened my eyes to countless artworks by various artists about these two prominent apostolic-missionary figures in the Church.

The entire mural, from its images to its colors, is rich with symbolism that I intended to convey certain messages, although the viewers may draw out their own meanings.

Firstly, St. Peter and St. Paul’s “Embrace of Peace” has been interpreted in different ways by various artists as St. Peter and St. Paul greeted each other with a holy kiss of peace, which is an early Christian expression of love and peace. Apostle Paul, in some of his epistles, has instructed Christians to “Greet each other with the holy kiss of peace.” (Romans 16:16) Later on, this expression, which was derived from Hebrew’s Shalom Aleikheim (“May peace be upon you”), has turned into the “Sign of Peace” in the Mass.

Secondly, I chose the colors to represent the Church’s liturgical colors for all seasons. They also convey various cultural and religious virtues such as courage and martyrdom for red, passion and zeal for purple, warmth and light for yellow and orange, and life, hope and serenity for green and blue.

Thirdly, Peter and Paul’s faces are touching each other but their eyes do not meet. This symbolizes the relationship of the two apostles, one a fisherman and the other a Roman citizen, whose opinions on faith, Gospel and the Church were often different. However, their embrace embodies unity and acceptance in differences.

Lastly, the act of people entering the chapel through the door of the mural itself influenced my decisions. We usually relate to art by gazing in front of it. However, the mural of Saints Peter and Paul invites us to the level of entering into the art itself and participating with Peter and Paul; it’s entering into the space of prayer, peace and love, and to participate in the shared mission of Peter and Paul, whom Christ called and sent to “preach the Gospel to all nations.”

The mural work began July 1, 2020 and was completed seven months later. When I look at it now, I relate to it beyond the symbolism I intended. I can’t look at it without remembering my various feelings and experiences during the period of its making. In the middle of the pandemic, I kept painting. Whether I was sad or happy, anxious or calm, annoyed or pleased, lonely or joyful, bored or excited I kept painting. I also mourned the death of three great Columbans (Pat Murphy, Kevin O’Rourke, Frank Ferry) in the Korea Region.

While painting in solitude, I was not only deeply aware but also confronted with what was happening in the world, in the Society and in myself. I found deeper meaning and personal connection with it. So, the artwork, I would say, can speak on its own to different viewers in different ways in different times. I remember a nun who, upon seeing it, said, “It looks like a male counterpart of the visitation of Mary to her cousin Elizabeth.” An art professor I know once reminded me that, “the worst thing you could do to art is to explain it.” Let art speak the way God speaks to us. With that, as you gaze upon any artwork, I leave you with a quote from a Croatian artist, “Art speaks its own language.”