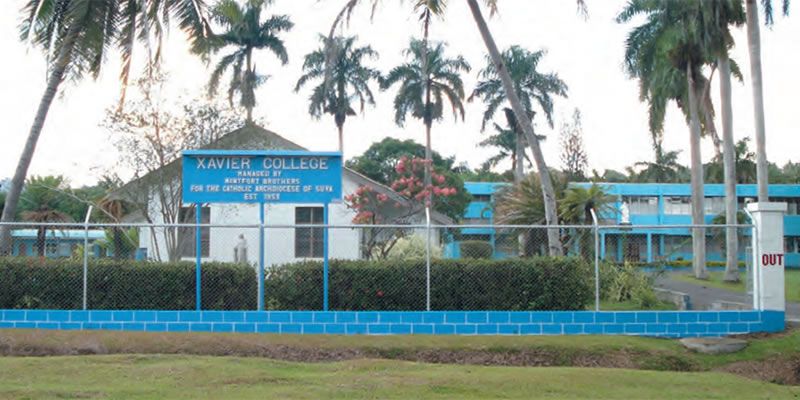 When the Columbans arrived in Fiji on February 22, 1952, a number of them went immediately to Xavier College in Ba, to take over its administration, as a way of outreach to the predominantly Indo Fijian population of that part of Fiji. Columbans remained teaching there until 1989, when they gave the College to the Kerala Province of the Brothers of St. Gabriel of Monfort. The Brothers in turn ran the school until December 31, 2020, when they handed it to the Archdiocese of Suva, which in effect, included the Parish of Ba, a long time Columban parish.

Already having pastoral supervision of three primary schools, Columban Fr. Patrick Colgan asked Mrs. Margaret Muller to become the Executive live-in Manager of the College, which she has accomplished with great enthusiasm, and support from the staff.

Just as the College was getting used to its “new feel,” as a parish school under lay management, Fiji was struck by its second wave of COVID 19, which being the Delta variant, has been much more severe than the first wave in 2020. All schools closed on April 19, 2021; ditto, the airport and hotels, places of worship, sit-in restaurants, cinemas, etc. The tourism industry, which was providing 40% of GDP in 2019, shut down overnight, and many thousands lost their jobs.

The domino effect on other parts of the economy has been devastating, and students, already deprived of school, were living in families, many of which had lost their incomes, were in quarantine, or were mourning the fatality of a loved one.

Mrs. Muller and her team got to work. With the help of the Vice Principal, Mrs. Asihita Kumar, the Principal and staff, they put out an appeal to all teachers of the school to gift a portion of their bi-weekly income, and former students both in Fiji and overseas to send funds, for a grocery drive to needy students that would keep going for as long as school was closed.

The domino effect on other parts of the economy has been devastating, and students, already deprived of school, were living in families, many of which had lost their incomes, were in quarantine, or were mourning the fatality of a loved one.

They have now completed three rounds of distribution. Mrs. Muller offered the following reflections on return from each visitation:

“Two families are currently on home quarantine as a parent is a positive case and hospitalized. Six families lost their income when their workplaces closed; four families were on reduced salary. One family was referred to us from Social Welfare, and there were three unemployed single mothers with a child each attending the College. Their looks of relief and gratitude was so rewarding. I would like to thank each one of you who together wove this fabric of giving. I also realised that many of our students, due to their isolated locations, struggle daily to commute to school, pre-covid, and their struggles are now compounded by the effects of this pandemic. Your support has somehow given them a glimmer of hope on humanity.”

“Yesterday, we reached out to another twelve families which brings the total to 30. We continue to receive support from our former students and one notable donor is Dr. Hari Lal, a former General Counsel to President Bill Clinton, who has pledged to stay with us and see this pandemic through.”

“The third round of delivery was completed today. Twelve more families were assisted taking the total to 42 families. The struggle is real for so many families. Not only with food but with medical, emotional and psychological needs too.”

Here is the account of a teacher, Ms. Purnima Badlu, on the heroic efforts of one of her students, Manasa Saukuru:

“He has been struggling with submitting his assignments online. Sometimes he is late, because he does not have a smartphone at home. He was asking his neighbor to send his assignments for him. His whole village was on quarantine. He has been cutting sugar cane in order to buy himself a phone, and since then has been catching up on submissions. His English lesson had all correct answers!”

And finally, a reflection from Dr. Hari Lal who is now living in Los Angeles. Dr. Lal was a student in 1969 from a very poor family whom the Columbans admitted for free. At that time Dr. Lal was selling milk in the village daily to pay his tuition fees. His brother aged sixteen and himself left for Canada with no relatives and no money. They worked sixteen hours a day in a bakery at $0.28 an hour. Upon completion of his BA he was offered two scholarships in Canada, firstly to medical school to do his MBBS and secondly to law school to do his LLB at the University of Toronto. After completing a Ph.D. degree from University of London he became an associate professor of law in Los Angeles. In 1992 he became the assistant General Counsel to President Bill Clinton.

“To all my dear colleagues at Xavier: We may be comfortably living in our apartments or houses. We may not be getting affected by hunger during this time of despair. But there are so many people out there who may not have eaten a proper meal in the last few days. The turmoil caused by the COVID 19 pandemic is playing havoc in the lives of millions of people from all around the world. We are all in this together. We all can do our bit. Today I accompanied a local pastor and we fed 97 homeless in Los Angeles in a downtown area. My heart swelled with joy as each hungry homeless regardless of color or creed gave blessings for feeding them.

Shred the labels and rise as a human being – a human being of compassion, a human being of kindness, a human being with real sense to a member of the human race to help in needy times. Don’t shy away from giving because God will return you with tenfold provided you do it unconditionally and with no expectations. A gift that touches the heart ignites the soul with flames of passion.”

The Columbans of old can be proud of the seeds they planted all these years ago in the hearts of the children of the cane fields of Ba!