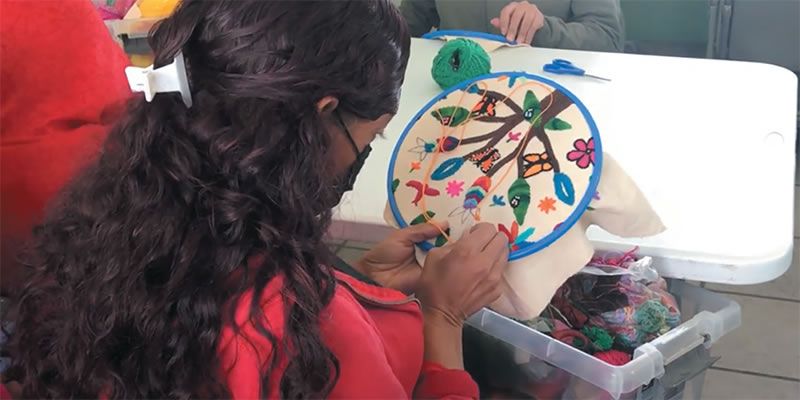 For more than 25 years, the Missionary Society of St. Columban has worked in one of the most impoverished areas of the U.S./Mexico border: Rancho Anapra, located on the far western edge of Cd. Juarez, Chihuahua, Mexico. Many of its streets remain unpaved; the water is undrinkable, and the electric service is deficient.

Geographically, Anapra’s northern border is Sunland Park, New Mexico, from which it is separated by an 18-foot high, steel barrier. Rather than being an advantage, its proximity to the United States is a curse because it attracts the drug traffickers as well as the human traffickers which has made it a very high-risk area of violence, kidnapping and the recruitment of its youth into this criminal mayhem.

In contrast to its reality of violence, for decades, Anapra has been a place of welcome for internal immigration. Mexicans displaced by poverty, natural disasters and drug violence have migrated to Ciudad Juarez in the hope of better jobs, pay, and sense of security. The arrival in Juárez of the maquiladora (foreign factories) industry and the growth of the job offer in the city, attracted thousands of people in search of a better life. Anapra, little by little, became “a bedroom” community for those who were employed in the “maquila” system.

Corpus Christi, a Sanctuary in the Desert

One of the few places where Anapra residents can find support and comfort is Corpus Christi Parish, which is administered by the St. Columban Missionary Society, under the pastoral care of Fr. Bill Morton. People come to Corpus Christi to talk to God about their joys, hopes, sorrows and anxieties. The parish is a place of encounter; here they can baptize their children and access training to receive the sacraments of first It is also a space for the Catholic celebration of their quinceñeras and weddings. In this rural community, the people know what it means to ask God for “their daily bread.” Here they learn to live together in the name of God, celebrating the Eucharist, praising God and studying the Holy Scriptures.

Attentive to Reality and Available to God’s Call

In September 2018, the first groups of migrants from Cuba and Central America began to arrive in Ciudad Juarez, only to be followed by a great wave of people fleeing the violence and poverty generated, in their countries, by corruption, greed and by the structures of government at the service of the most powerful. They arrived at the border between Mexico and the United States, hoping to receive political asylum, to reunite with their families who were already in the United States and achieve the “dream” of a better life.

Former U.S. President Donald Trump’s anti-immigrant policy gave rise to one of the most controversial programs in the history of world migration.

When former President Trump was forced to end his family separation policy, after public backlash, he changed tactics and in January 2019 implemented the so-called Migrant Protection Protocols (or MPPs). The MPP situation forced hundreds of thousands of women, children and men to be returned to Mexico in cruel and inhuman conditions and under a “protection” law, put the lives of these people who were exercising their right to request asylum in a high degree of vulnerability and risk. Housing conditions and access to shelters are very limited and precarious. Many shelters have become unhealthy and overcrowded places that further harm the lives of these pilgrims.

As a team from the Ministry of Migrants of the Columbans on the border of El Paso and Ciudad Juárez, we started a support network for the migrant brothers and sisters who arrived by the hundreds on the Mexican side and who were being returned under the MPP.

On September 5, 2019, we opened the “House of Welcome” as a response to the humanitarian crisis and the urgent need for spaces to receive and protect women with their children who were at risk of being left on the street. We didn’t have a plan.

Providence and the Organic Growth of God’s Kingdom

While immigration advocates and people of faith in the United States, including our Columban advocates in Washington, D.C., pressed former President Trump and Congress to end MPP, in Ciudad Juárez, migrants simply had to wait. And wait. As the months passed, the women of Casa Acogida learned in community to embrace their vulnerability and their anguish. Little by little, they realized the need to have an “ordinary” life so that waiting for their asylum appointments would not be so heavy and desperation would not force them to take dangerous paths. In the search for alternatives to avoid sinking into depression, the Embroidery Project was born.

The Embroidery Project is Born in the House of Welcome

An old dream of a cooperative or alternative employment community project resurfaced in the midst of this humanitarian crisis. And, providentially, Casa Acogida’s response to migrant women in vulnerable situations was weaving its own dynamics and networks, that gave way to a community of women embroidering their dreams who combined their work with spiritual growth and healing through faith.

In March 2021, with Joe Biden as the U.S. President, the termination of the MPP Program put an end to the wait for thousands of migrants on the Mexican side of the border and the women of Casa Acogida were able to cross over to the U.S. and to meet with their families.

In a natural way, the Embroidery Project was adopted in the Corpus Christi Parish and today, more than fifteen women and girls, between the ages of 15 and 60 years old, build community and weave their hopes, their dreams and their desires for a world with justice, with dignity, without violence. They work and embroider the Dream of God. Every Tuesday and Saturday they meet in the parish hall to embroider together, share a meal and build community among themselves.

As they embroider together, around several large tables, they not only share tips and techniques on how to improve their embroidery skills, but also offer advice and tell stories about the different situations they face in their daily lives.

Mary, a member of the Corpus Christi community, says that the Embroidery Project: “is the only space and moment in which I can feel I am myself. I am not a mother, I am not a wife, but simply myself.”

The Embroidery Project seeks to expand its work to include more women. It is still under construction of its own internal process and growth. There is interest from other groups to support the project, and we need enough demand for the products to continue to strengthen our reception space and community.

Whatever the future of the Embroidery Project, this community process is an example of what is possible when people affected by injustice come together to heal themselves. “The Embroidery Project goes beyond a business, it is a humanitarian project. It serves as a network of support and solidarity. It is a space to weave the pain, the memories of their country of origin and to be able to express their emotions, feelings and stories through art, and to be able to weave a hopeful future.”