The Blessing of Bishop Paul 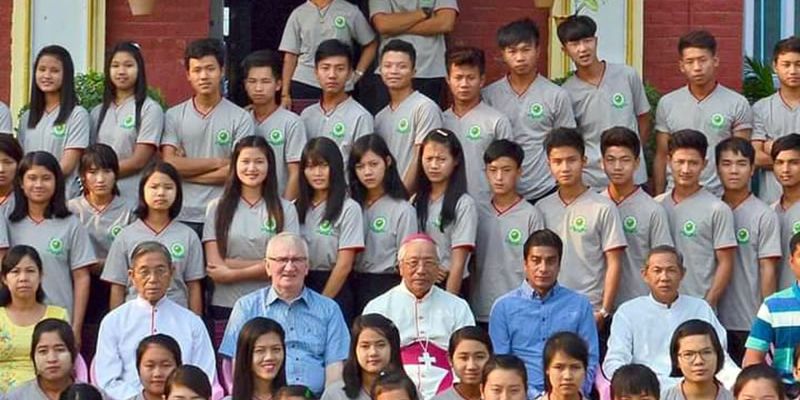 In 1970 I was a theology student at our Columban seminary in Ireland and worked in our book store. I was one of the shop assistants, and one afternoon Bishop John Howe came and asked me to send some theology books every three months to a Paul Grawng in Myitkyina. That was 51 years ago and the first time I heard the name of Fr. Paul Grawng.

I had to wait another 32 years before I had the privilege to meet him. In 2002 I visited Myitkyina, Myanmar, and on arriving at St Columban's cathedral I met a man outside and thought he was either a farmer or someone who had dropped in to say a prayer. He was wearing slippers, grey trousers and a shirt hanging out over his trousers. He approached with outstretched hand and a genuine smile. I introduced myself as a Columban, and he invited me in for coffee. He gave me a room and told me to stay as long as I wished. Over coffee he mentioned several Columbans who worked in the Kachin State and told stories about them. I wondered how he knew so much about the Columbans and still not knowing who he was I innocently asked, “And what's your name?” He gave a gentle smile and said, “I'm Bishop Paul, Bishop Howe's successor.” I was happily surprised as it was the first time I had met a bishop so simply dressed with no ring on his finger. We hit it off and enjoyed some great chats over the next three days.

When I returned to Ireland we kept in contact, and in 2003 he told me he was transferred to Mandalay as Archbishop. A few months later he emailed to say he was going to Rome to receive the pallium and would like to stop over in Ireland. This was great news, and he spent some time in our Columban house (Dalgan) and met those Columbans still alive who had worked in Myitkyina. At the weekend I was going to visit my elderly parents in Derry and asked Bishop Paul if he would like to come with me. He jumped at the idea, and he stayed with my parents for 3 days. He offered the weekend Masses in my home parish and spoke about the importance of the family, something very dear to him. I took him to visit friends, and he made a big impression on people.

Bishop Paul knew I was finishing my term on the Columban General Council in Ireland in 2006, and he invited me to come to Mandalay to teach in the pre-major seminary. In early 2007 I went to Mandalay, and my friendship with Bishop Paul grew stronger and stronger. To be appointed as Archbishop was a great honor, but he remained the simple shepherd.

Both of us were interested in education and in young people so after a lot of planning we started a Higher Education Centre (HEC) in Mandalay. It is a 3-year residential course to train teachers.  Bishop Paul very frequently came to the HEC, offered Masses, chatted with the 150 students and on Sunday nights joined the students for their social night of drama, singing and disco dancing. Bishop Paul was always out on the floor dancing to the great joy and amazement of the students. He would say “life begins at 75.” This meant so much to the students as Bishop Paul debunked the image of pomp and ceremony associated with bishops. My greatest joy was in early 2017 when Bishop Paul asked me if we could give him a room at the HEC. We prepared a small sitting room and bedroom for him, and we were all happy that he was a fully-fledged HEC family member.

Words which come to mind about this great shepherd are: saintly, encourager, cheerful giver, prayerful, simple life style, patient. He loved everyone and had a special place in his heart for youth and believed in their potential. The Church, Myanmar and all of us are much better because of Bishop Paul. What a blessing he was to all of us! He is always in our hearts.