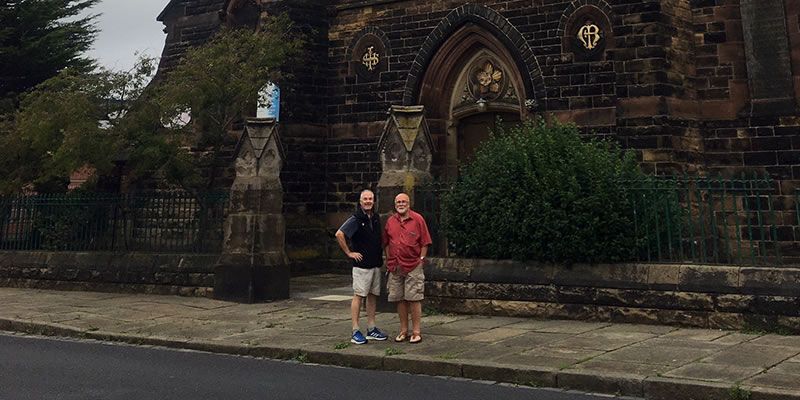 Deep in the industrial heartland of northern England, Columban Fr. John Boles encounters a parish with a remarkable tale to tell.

"Every picture tells a story," goes the expression. However, it could just as well read, "Every PARISH tells a story."

That is certainly the case with Our Lady of the Immaculate Conception in Birkenhead, a town set on the opposite side of the River Mersey to its more famous neighbor Liverpool.

Visiting the parish as part of the Columban Fathers' mission promotion and fundraising program, I was captivated by the story of the place, told in graphic detail by secretary Carol Covers and former parish priest Fr. Phil McGovern.

Originally a sleepy riverside harborage, Birkenhead exploded into prominence in the nineteenth century with the Industrial Revolution. It quickly developed into a major port and one of the world's biggest shipbuilding centers. Many of the workers were Irish Catholics, their homeland being but a short hop across the Irish Sea.

The Irish population swelled even more as a result of the Great Irish Famine of 1845-48, and in 1854 the parish of Our Lady was founded in order to serve them. The church dates from that time, and is an exuberant celebration of the "neo-Gothic revival." It was designed by Edward Pugin of the famous Pugin church-building dynasty which pioneered that style.

The church was surrounded by endless rows of terraced housing, hemmed in between Camell Laird's naval dockyard and Birkenhead Park. This park was laid out by Joseph Paxton in 1847 and is reputedly the first municipal park in the world - certainly in Britain. Among its admirers was eminent American landscape architect Frederick Law Olmsted, who used it as an inspiration for his Central Park in New York.

However, dark days lay ahead. The area bore the brunt of the Great Depression, and was the scene of the notorious three-day "unemployed men’s riot" in 1932.

Worse was to follow. In 1941 Birkenhead became a target of the Luftwaffe's blitz campaign. On March 12, 1941, the parish took a direct hit. The church was badly damaged and the presbytery completely destroyed, leaving the parish priest and housekeeper dead under the rubble.

Rising from the ashes of war, the parish complex re-opened in a spectacular show of devotion ten years later, with a torchlight procession of 30,000 of the faithful parading through the streets amidst an estimated 135,000 onlookers.

Recent history has brought more changes. The size of the congregation has fallen markedly. Many people moved away from the area in the 1970's as swathes of old housing were demolished and unemployment reared its head once more, the result of declining activities in the port and shipyards.

However, now merged with two nearby parishes, things are looking up again. The parish community might be smaller than hitherto, but in spite of that - or maybe because of that - it is ever more intimate and vibrant, and remains a great friend of the Columban missionaries.

Carol and Fr. Phil assured me that Our Lady's has endured worse, and always bounces back. "Bombed, not broken,” indeed.