Columban Mission in the Province of Kangwon 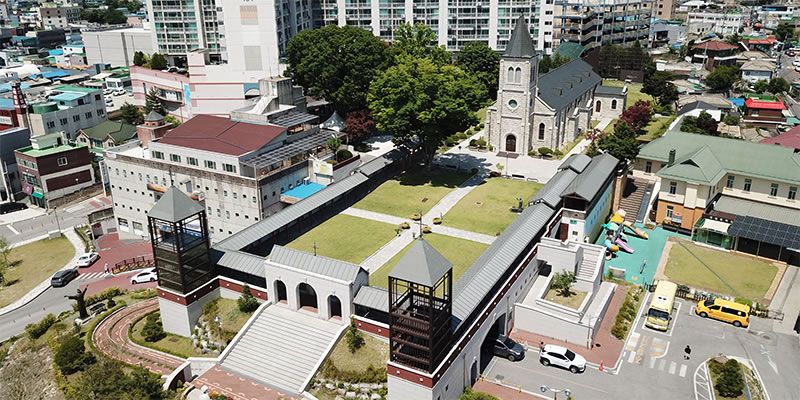 This article was written by Fr. Hong-Kison-Hijino who is the present parish priest of the Sacred Heart of Jesus parish of Chungrimdong in Chuncheon City, Korea.

The parish of Kogin is the northernmost parish on the east coast of Korea. It is above the 38th parallel and next to the Demilitarized Zone (the DMZ). I am a native of this parish. I lived there until I graduated from middle school when I went to the minor seminary in Seoul. For ten years I imbibed some of the waters of Seoul and Kwangju, Cholla-namdo when I was living there. Of course I spent all of my vacations until I was ordained in my native Kogin where I was born and raised. I am a true son of Kogin’s sea breezes.

Kogin was originally a Catholic out-station and only became a parish in August 1976. I was 14 years old then, but I had met many Columban priests from the time it was a mere outstation. Fr. Hubert Hayward became the parish priest, and he was almost everything to me in my young days. I served Mass for him and grew up under his tender care until I went to the minor seminary and following that to the seminary until I was ordained in 1989. Fr. Hayward was always my parish priest in Kogin. Through him I had the pleasure of meeting many Columban missionaries. They all used to meet on Monday evenings for a simple meal and to spend some convivial time together. In the summer they used to go to their holiday house by the sea in the village of Mulchi. I became part of that gathering and had the privilege of meeting Frs. Philip Crosbie, Thomas Comerford, John Lynch, John Nyhan and many more at the Mulchi holiday house. While I was at the minor seminary I got to know about the Columban Central House in Donamdong. My aunt was working there on the staff but up until that time I never knew or took any great interest in what she was doing or where she was working.

I was appointed curate to the parish of Hyocho-dong after ordination. I had all my meals with Bishop Thomas Stewart as I was living in the bishop’s house. Living that close to him I got to know him very well. When I was doing some post graduate studies in Rome I took the opportunity to visit Ireland. I spent a day in Dalgan which originally was the Columban Seminary and is now the headquarters of the Irish region. I went to pray at the grave of the late Bishop Stewart and while there I discovered the graves of numerous Columban missionaries that had served in Korea. I was delighted to have been able to visit the Columban cemetery and see the graves of these great missionaries.

When I completed my studies in Rome, I returned to Korea and served in a number of parishes. While I was in the parish of Hongchun I wrote a book about its 88-year history. While writing it I got to know a lot more about the work of Fr. Crosbie. In 2017 I was appointed to Chungrimdong parish and then wrote a book about its 100-year history. I give thanks to God for allowing me to write these two history books. As I was writing them I had the feeling that the Columban missionaries that had died were resurrected and appeared before me. I realized anew the tremendous courage they showed and their utter dedication to their mission. I could see that similar to earthenware that could easily be broken so could these men of flesh and blood. However, what I actually witnessed was their mental tenacity and the vigorous activity of the Holy Spirit. To me, they are all my heroes.

I sincerely thank the 88 Columban missionaries that served in the diocese of Chuncheon. As I wrote the 100- year history of Chungrimdong parish I was able to concentrate more on their lives and work. It was a special time of grace for me personally. For over a six-month period I happily welcomed the dawn each morning as I felt that these brave missionaries were actually assisting me in my writing the one hundred years history of this church. I experienced a thrilling feeling each time I discovered some facts I had long misunderstood or was not aware of. That bloodcurdling experience used to stay with me for a week or so.

The missionaries of the Columban Foreign Mission Society are all pilgrims for Christ [Peregrinatio Pro Christo]. The individual Columban missionaries I had the privilege of meeting freely chose to be pilgrims in Korea and lived in the province of Kangwon. They were living witnesses of people that gave their lives out of love for their friends. I continue to live in this area and am extremely grateful for having known them.