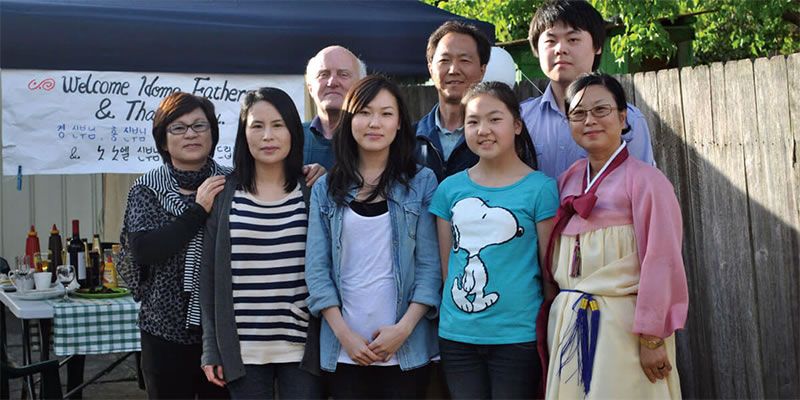 I sincerely wish to send greetings and best wishes to the priests of the Columban Mission Society.

When I was experiencing major difficulties in my life I was greatly consoled and encouraged to keep going by numerous Columban priests. As I recall my meetings with those priests many memories come back to me and I want to convey my gratitude to you.

I was baptized in the parish of Hacksong-dong in Wonju city (South Korea) at Christmas 1971. The following year I met Columban Fr. Noel Daly. Fr. Daly created a catechetical textbook that was used for Sunday school children in each of the many parishes in the diocese of Wonju. He wrote separate lesson plans for each of the six grades in Sunday school developing a curriculum for all six levels. Using a steel nib he wrote each lesson on a stencil and using a simple mimeograph he made thousands of copies one at a time. At the end of the year’s work he bound them into books for each grade. I regularly witnessed him beavering away late into the night.

Until he returned to his native country of Ireland in 1984 he not only created Sunday school textbooks but also was very involved in activities for the democratization of Korea, successfully helping students that were experiencing particular difficulties, to change from feeling negative to developing a positive attitude towards life.

I met Columban Fr. Peter Kelly the following year. While he was mostly involved in counselling students and teaching English, I can clearly recall how he helped poor struggling people that had suffered from floods in remote villages all over the province of Kangwon.

I met Columban Fr. Sean Conneely when I was working in Seoul after I had graduated. He spoke the Cholla province dialect having served time as parish priest on the island of Heuksan. He possessed a wonderful sense of humor. He gave guidance to hundreds of high school and university students at the Columban student center in Wangshipri, Seoul. Being an extremely caring person, he listened to students’ worries and enabled them to get new strength. Especially in the 70’s and 80’s when student activities were severely restricted with the police watching their every move he provided a safe haven where students could discuss the burning issues of the day helping them to discover ways forward. He was totally committed to student action.

In April 1984 I came to Australia as a foreign student of the Australian government. In order to attend Mass I went to Concord Church where the Korean community gathered. There I renewed my acquaintance with Fr. Peter Kelly. He celebrated Mass in Korean as well as the Sacrament of reconciliation. Having returned to his own country he was working hard to serve the Korean community. On one occasion he declared “due to special circumstances in this parish I am restricted in the amount of time I can devote to celebrating Mass and hearing your confessions. As there is an outstation not very far away I could celebrate Mass there and I reckon that would be a better place for us to meet for Mass.” The outstation Fr. Peter prepared for us to meet, later became the present-day parish for Korean Catholics in Sydney, having developed enormously in the meantime.

Having resided for some time in Sydney I moved to Melbourne because of my work commitments. As the area I was living in was a long distance from the parish church and due to my limited language abilities I was experiencing difficulties especially when going to confession. The Columban priests residing in Melbourne heard of my situation and invited me to the Columban church where they celebrated all the Sacraments. I want to sincerely thank all the Columban priests especially Frs. Raymond Scanlon, Frank Ferrie, Paul Carey, and Michael Gormly.

All of these priests were appointed to the strange and far away country of Korea as soon as they had been ordained. They spent all of their youth working hard in Korea. After they returned to Australia and despite having lots of work to do in their native country, they generously gave of their time for the Korean community providing it with Mass and the Sacraments and never tired of doing so. I thank the Columban priests that consoled us immigrants when we were feeling homesick and were in pain for making it possible for us to continue to develop our faith life. I wish you good health and hope that you have long lives, and I pray for you all.

The author is Kim Chong-hwan (Ignatius) who is a member of the Columban Supporters' Group. He was the president of the Melbourne Korean church but now resides in Sydney.