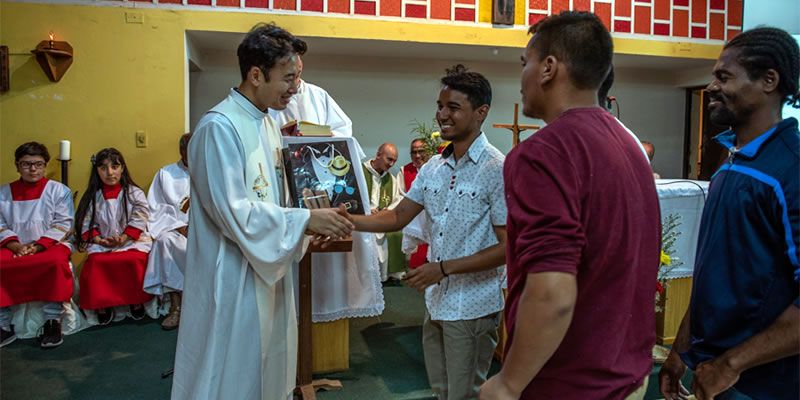 Fr. Sung Hoon Jung Francisco was ordained a priest of Seoul Diocese in 2014 and appointed to Chile as a Columban priest associate in 2017. He ministers in St. Columbans parish church in Santiago the capital of Chile.

When I arrived here ten years ago, the people started talking about the need for a resting place, a shelter, for migrant workers. For political and economic reasons people were leaving their native countries and arriving in Chile. Some of our parishioners were saying that we needed to take care of them and showing concern about their plight. As it so happened a religious group for their own reasons decided to leave which meant there was an empty building in one of our out stations. Our parish community began to discuss how they might use that vacated building. It was then that the idea of making it a resting place for migrants from Venezuela and Haiti began to emerge. The migrants from Haiti had special needs in that they spoke a different language to all the migrants, they were of a different skin color and culture which meant they had special difficulties in getting jobs and received unfair treatment and were discriminated against when it came them finding a place to stay.

We started to discuss their need for a resting place and an educational facility where they could learn Spanish as well as Chilean culture, history, etc. While the parishioners talked about creating a resting place for the migrants not all of them agreed with the idea. There were those that said those foreigners would surely play loud music, throw their trash everywhere and make the whole area dirty. They were of the opinion that if they accepted the migrants Chileans would lose job opportunities and their lives would be made more difficult. In order to alleviate the discomfort some parishioners had about accepting migrants we thought it would be good to have some meetings between the migrants and our parishioners. Perhaps by having the two groups meet each other they could begin to form some relationships and at least be able to address some of the issues. So the first thing we did was to have people share food. Once a month after Mass the people would prepare and share traditional Haitian and Chilean food. We saw that by eating food together they began to share their life stories with people gradually opening their hearts to each other. They found some common ground and solved some misunderstandings. We next prepared a place where they attended Mass together and were given the opportunity to share their faith stories with each other. During vacation time we hired a bus and went on a picnic to the sea. The people wore their traditional clothes and enjoyed spending time talking about their countries customs and culture.

As the meetings continued some small changes started to take place. There were some parishioners that invited migrants to their homes and the way the parishioners looked down on these strangers attending their Mass began to change.

In all we spent about a year preparing the minds and hearts of our parishioners, and finally at the end of last year the doors of the resting place were opened. We felt that God was helping us while we were going through this process. Before we built the shelter Bishop Ku Yo-Bee from the Seoul Archdiocese and Fr. Song Young-Ho  from the foreign mission office [he had been on  mission in Chile for six years as a Columban priest associate starting in 1999] visited our community and supplied us with the necessary finances to erect the shelter and the education center.

This year the diocese of Santiago has implemented a support program for migrants, and our parish community has begun our own program. We have not ended our project with the opening of the shelter and education center but continue to develop the relationship between our parishioners and the migrants. We hope that in the eyes of God we are building a good Christian community. We hope that together with our new neighbors we can discover a way of living that will take an interest in all our people. I ask that you pray that we may become a community that conveys good news to many people.