Our Lady of Guadalupe Mural at St. Columbans, Nebraska 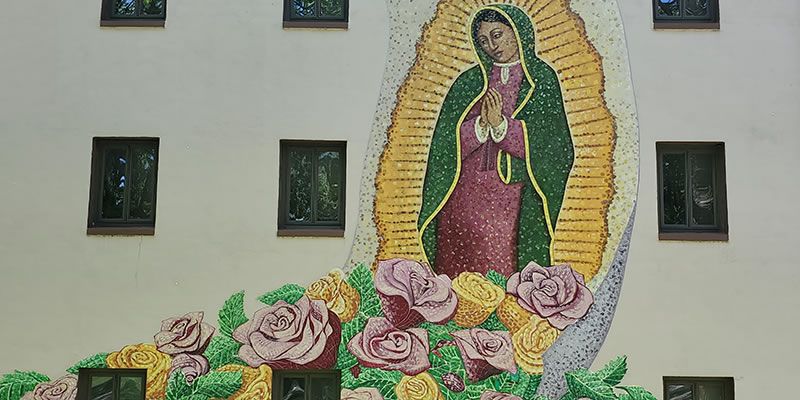 Columban Father Chris Saenz returned to Omaha after many years as a missionary priest in Chile where he worked among the Mapuche people in the south of Chile and in the urban Columban parishes of the capital city of Santiago.   His missionary experience and the religiosity of Chileans helped to instill in him a deeper appreciation for the roots of his own religious heritage as a Mexican-American.  When a classmate from high school invited him to bless a mural honoring the contribution of Irish immigrants to the life of South Omaha, Fr. Chris discovered the power of murals.  In urban settings, murals serve a number of purposes: the transformation of an inner-city neighborhood, an advertisement for a business, the celebration of an ethnic heritage, and more.  In this case, it reminded him of the celebration of the religious and cultural heritage of Mexico and Latin America.  He wanted to express that appreciation in a mural dedicated to Our Lady of Guadalupe, the patroness of the Americas. Fr. Chris works closely with the Hispanic Catholic community of Omaha which meets regularly in the Columban retreat center in Bellevue, Nebraska.   He consulted Columban superior Fr. John Burger about the possibility of painting a mural in honor of Our Lady of Guadalupe on the wall of the Columban Retreat Center.  Fr. John gave him his wholehearted support.  Fr. Chris then contacted the company of artists responsible for the painting of the Irish Community mural, A Midsummer´s Mural.

Richard Harrison is the owner of A Midsummer’s Mural, a company which paints murals in the metropolitan area of Omaha, throughout the state of Nebraska and and in the state of Iowa.   Richard began painting mural 35 years ago when he was a junior in high school.  Richard says that he was always interested in theater and a teacher invited him to begin painting murals as background for plays. He studied scene painting at the North Carolina School for Arts.  He is responsible for the painting of more than forty murals in the Omaha area, twelve of them in different churches.  He hopes that his work can bring out the uniqueness of nature, ethnic communities, and faith.  On the website for A Midsummer’s Mural, he quotes author C.S. Lewis about our relationship to beauty: “We do not want merely to see beauty, though, God knows, even that is bounty enough. We want something else which can hardly be put into words—to be united with the beauty we see, to pass into it, to receive it into ourselves, to bathe in it, to become part of it.” (The Weight of Glory)

Rebecca Harrison is Richard´s daughter, and she studied art history at the University of Nebraska at Omaha.   Rebecca has been painting murals for seven years.  She designed the Columban mural of Our Lady of Guadalupe.  Another young artist, Jair Rodriquez, also worked on the mural. Jair studied graphic design at Bellevue University.  He came to Omaha from Mexico when he was four years old with his parents.  Painting the mural has a special meaning for Jair.  It touches deeply his cultural and religious roots.  He proudly acknowledged that painting the mural is an expression of his Catholic faith and his devotion to Our Lady of Guadalupe.

The Columban headquarters and its Retreat Center is a place where many people and their families come for retreats and meetings as well as a place to walk, to meditate and pray.  Now they can stop and pray before the mural of Our Lady and ask her to intercede for them with her Beloved Son and our Savior, Jesus.  As always, her desire is for all of us to come to believe and to follow Him.