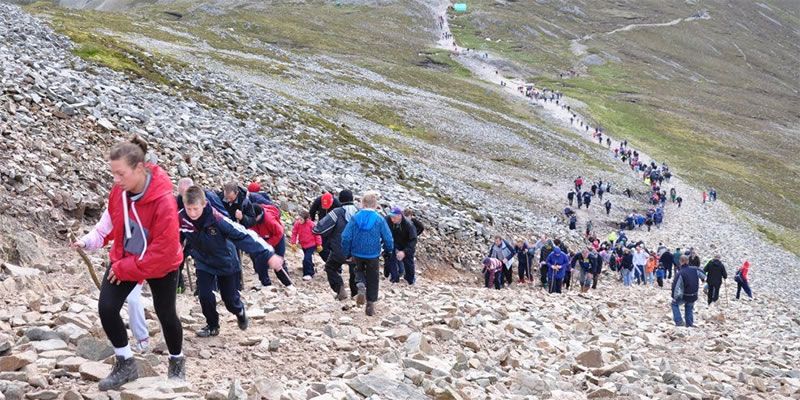 Savenaca Momo from Nadelei in Ba Province, Fiji, is the epitome of a gentle giant. He joined the first team of Columban lay missionaries to leave Fiji. They were appointed to Ireland. He was assigned to a town called Newbridge about 25 miles from Dublin. He became well known by playing rugby for the local team. A great horse lover, he was very fortunate to live within a few miles of the Curragh, the home of horse racing in Ireland. He used to often cycle there on Saturdays. Using his Fijian charm he was usually let into the racetrack for nothing.

Savenaca was one of our group who did a four day pilgrimage walk from Knock (where Our Lady appeared in 1869) to Croagh Patrick, the sacred mountain and great pilgrimage place in Ireland since St Patrick’s time. We finished our pilgrimage by climbing the mountain with about 25,000 other people on the traditional pilgrimage day, the last Sunday in July. Savenaca with his big long legs and years of practice had no trouble climbing the steep slopes. The last part of the climb near the summit was the most dangerous because we were climbing over unstable shale which would often slide back when stepped on. I saw Savenaca reaching out to elderly people nearby to help them to avoid slipping or falling.

On reaching the summit we attended Mass and walked around the little church saying the set prayers. As we sat then on the brow of the mountain top looking down at the hundred islands in the bay below the mountain, Savenaca stretched out his arms and said, “I could sleep here now.” Well, we didn’t have time for that because we had to climb back down the mountain. As we neared the bottom, cameras from the Irish TV station were filming the crowds and interviewing the occasional pilgrim. Savenaca, being one of the more interesting looking pilgrims, had a microphone thrust in front of him. He was asked what he, as a missionary, was doing in Ireland. “Well,” he said, “St. Patrick came to Ireland to convert people to Christianity. I have come to finish the job!”