The Way the Lord Leads One 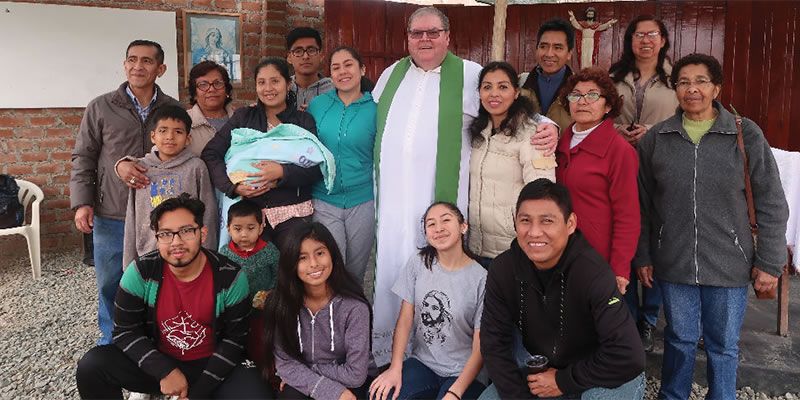 I first considered becoming a priest when I was seven years old. Mysteriously enough I still remember that strong feeling of being called by God. In high school I thought in great depth about that call. If I were to become a priest what kind of priest would I become? I also wanted to become a real estate agent, to get married and for three years I had this internal battle trying to decide what I really wanted to do. Finally I decided that I wanted to be a missionary priest. I cannot explain this call but know that it came from the Lord.

My father finally found out about my decision when he overheard guests talking about it at the party following my ordination to the deaconate. He had suffered from polio and was told by his doctor that as an aftereffect of the polio he could not have children. He pleaded with Our Lady. “If you allow me and my wife to have more children I will grant you permission to have my eldest son become a priest for you dear Mother Mary. God heard my parent’s prayers, and my seven siblings were born. My parents never once talked to me about becoming a priest. They merely took care of me and helped me. Our family always went to Mass together and recited the rosary every night. We were poor, and my father took on the responsibility of supporting us by working two jobs. Even though we did not have money we were a happy family living our life of faith.

When I was a seminarian I was sent to Korea for mission experience. I found Korean a very interesting language but very difficult to learn. There was an occasion when I lost confidence deciding that I could not preach seeing that I could not speak the language. However as I became a little better at using Korean I went to Gwangju diocese and worked in Nonsungdong and Gwangcheundong parishes. Later I worked in Incheon diocese in the parish of Yawoldong. I lived happily sharing my faith with Korean Catholics. While I found Korean food to be really spicy I liked it with the result that in two years I actually gained over 60 pounds!

After ordination I would have liked to go back to Korea, but I was assigned to Chile. When I first arrived there the army was in complete control of the country, and the atmosphere was extremely tense. The Chilean Catholic church stood on the side of the poor worried about the problems they faced and fought with them and so was hated by the government. The police fired bullets into our house and imprisoned some of our Columban priests. The rich merely looked after their vested interests and oppressed the poor with the result that they could not improve their lives. Even given these difficult circumstances the poor people tried to live happily from day to day. I also worked in neighboring Peru a country that uses the same Spanish language, but the two countries cultures and customs are quite different. I was happy working in Peru also as a missionary.

Recently, I worked in Australia, my native country. I visited parishes explaining the mission of the Columbans. As you know Australia is a long distance from the Philippines, Pakistan, Korea, South America, etc. The people need to be made to wonder about these countries if they are to take an interest in Columban mission work.

Working with Korean, Chilean, Peruvian and Australian people I realize that each nation has different ways of thinking as well as living. However I have learned that it is through the love of God that we can understand and love each other.  I am once again on mission in Chile. Even though we are weak, the cross we bear is not too heavy due to the mercy and grace of our God. It will be wonderful if in my future missionary journey I can share God’s love with the poor. I sincerely pray that the Lord will lead me in the way he wants me to go as I place my trust in the God that has moved my heart and invited me to this life.