The first group of Columban Sisters professed in 1924, under the leadership of Mother Finbarr Collins.

In 2014, the Columban Sisters celebrated the 90th anniversary of their congregation.

During their nine decades of service, the Columban Sisters have branched out from their first foreign posting in China, to establishing presences in Korea, Pakistan, Southeast Asia, Latin America, the United States and other countries.

2014 was a milestone year for the Sisters to look back on their great achievements throughout the years, and to look forward to the future. 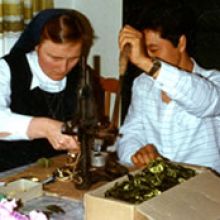