A decade and a half into the new millennium, the Missionary Society of Saint Columban was fast approaching its 100th anniversary. In mid-2015, the U.S. Columban Fathers commissioned the construction of a Columban Memorial Garden on the Columban campus in Bellevue, Nebraska, and construction began later that year.

On May 27, 2016, the dedication ceremony drew more than 300 attendees from around the world, including Columban Fathers, lay missionaries, co-workers, volunteers, benefactors and residents of the local community.

Other guests included the Omaha Archbishop George Lucas, and members of the Ancient Order of Hibernians. The event also featured a commemorative Mass, musical performances, a Children’s Choir, and speeches from Columban U.S. Director Father Timothy Mulroy and other Columbans.

The Memorial Garden commemorates the 24 Columbans (23 Columban Fathers and one Columban Sister), who have been murdered on mission in various countries since the beginning of the Society. The bricks that form the border for the garden are engraved with the names of these 24 martyrs.

On the beautiful Bellevue grounds, the Memorial Garden serves as a reminder of the sacrifices that Columbans often have to make during their missionary work, including, in a few tragic cases, the ultimate sacrifice. 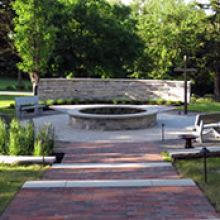