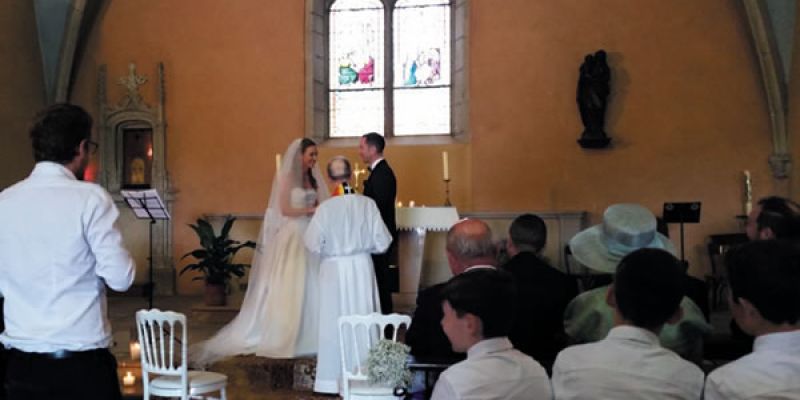 On Saturday August 12, 2017, I officiated at the wedding of my grand-nephew Killian to his bride Jenna. The wedding took place in the parish of Notre-Dame de Bresse-Finage, in Burgundy, France.

The parish priest, Pére Pontoni was most gracious and helpful in arranging the paper work and the legalities. He had time for us despite the fact that he was responsible for the weekend Masses in the parish church and in 15 other chapels throughout the parish territory.

The parish church was a simple building which could hold about 250 people at full capacity. We had about 120 guests at the wedding ceremony and at the reception which followed at the Chateau de Varennes, about five miles from the parish church.

I attended the 10:30 a.m. Mass in the parish church the following day. I was pleasantly surprised to find the church almost full, with full participation of the congregation in the singing and the liturgy. The priest also gave good leadership through his engagement with the congregation and his well-prepared homily.

It was during the Mass that I noticed the stained glass window behind the altar. It was mostly frosted glass, but the lower panels consisted of two scenes, side by side, in colored glass. The scene on the right was the Nativity, with Mary and Joseph, and the infant Jesus in the manger. The scene on the left was of Jesus and his disciples seated round the table at the Last Supper.

I was accustomed to stained glass windows where the Nativity was linked to the Crucifixion, or to the Resurrection, or even the Ascension. In this modest little church in France, the choice of pairing the Last Supper with the Nativity set me thinking.

My mind went back to a movie, Mary of Nazareth, which I had seen at the beginning of Lent last year. After Mary was engaged to Joseph she continued to live with her parents, fulfilling her usual tasks, including drawing water from the well with the other girls of the village.

One day, as Mary returned from the well and placed her water jar in the kitchen, she was startled by the angel Gabriel with his message from God, inviting her to become the mother of Jesus. After a short conversation, Mary gave her humble acceptance, and then did something surprising.

According to the movie, she immediately set out to visit her cousin Elizabeth in the hill country of Judea. Elizabeth greeted her as "the mother of my Lord," which indicated that Mary had conceived and was carrying in her womb a child who would be the Christ, the Son of God.

We are told that after three months with Elizabeth, Mary returned to her parents, but we are not told how she explained to Joseph or to her parents the momentous event that had taken place in her life. At the same time we know that during the days and weeks and months leading up to the birth of Jesus, Mary was focused on her own health and nourishment which were needed to build up the body and blood of the child within her womb. Among that nourishment surely was bread and wine.

It was this thought which led me to see the link between the Nativity scene and the Last Supper scene on the windows behind the altar in the parish church of Notre Dame de Bresse-Finage. The left-hand image was the scene of the Last Supper, where Jesus changed bread and wine into His body and blood for our spiritual nourishment. The right hand scene was more than 30 years earlier, showing Mary and her newborn Son, whom she had formed by changing the bread and wine and other nourishment into His body and blood as she mothered Him in her womb.

I thought to myself, "What a lovely gesture on the part of her heavenly Father to entrust to the young woman of Nazareth the beautiful task of transforming the food and drink of her daily life into the body and blood of His Son."

I am grateful that God allowed me to see this truth at such a late stage of my life on earth. That truth may never reach the level of a Church doctrine. But I know it is true, and Mary knows it is true, and we can talk about it and enjoy it even if no one else is even aware of it. Imagine reminding Mary that she changed bread and wine into the body and blood of the Christ more than 30 years before Jesus did it at the Last Supper.

I will always remember that little church of Notre-Dame de Bresse-Finage, and its simple stained glass window, where God revealed to me another glory of the lovely young woman He chose to be the mother of His Son, and who became mother of us all.